Twenty-five years after smallpox was thought to be eradicated from the earth, the threat is back — shadowed by the specter of bioterrorism.

To some medical professionals, the risk posed by a smallpox vaccine outweighs the risk of the disease itself — at least for now. Others in the region, however, support a call for a voluntary vaccination program for health care workers, encouraging their participation.

“Our feeling here is that it pays to have some level of preparedness,” said Dr. James Garb, director of occupational health and safety for Baystate Health System, which is actively participating in a state Department of Public Health (DPH) endeavor to vaccinate health care workers against a possible smallpox threat.

The main resistance to the program regionally has emerged from Cooley Dickinson Hospital in Northampton, whose medical committee unanimously agreed in January not to encourage its workers to receive the voluntary smallpox vaccinations — and set a more than two-week furlough period for those who are vaccinated.

“It’s clear that the risks of voluntary smallpox vaccinations at this time outweigh the potential benefits,” said Dr. Marc Edwards, vice president of medical affairs at CDH. “The clinical leadership at Cooley Dickinson is making the best informed decision to protect public safety in our area.”

Although Cooley Dickinson is the only area hospital to take a clear position against the vaccine at this time, others are approaching the issue with caution, amplifying the anxiety that all health care providers feel about a virus that, before now, has been unheard of in the United States since 1948 and seemingly gone from the world since 1977.

This month, The Healthcare News delves into some of those concerns — and how hospitals are handling the options posed to them by the state.

Baystate began educating its workforce before Christmas on the benefits and risks of the vaccine, and now expects about 35 to 40 people to participate, Garb said. The first vaccination clinic at Baystate is set for March 27, and they will continue weekly until every health worker who wants the vaccine — and qualifies for it medically — receives it.

Baystate has also been educating its employees, both with its own information and, more recently, with data from the Centers for Disease Control (CDC), on what smallpox is and how the disease incubates, manifests symptoms, and leaves the body.

“I don’t think we’ll be vaccinating large numbers of people,” Garb said. “I don’t think the benefits are worth extending it to 10 million health care workers across the country, but if we have some level of preparedness and something happened, we wouldn’t be starting from zero; we’d have some people vaccinated right off the bat.”
They would, of course, be those on the front lines of dealing with a smallpox outbreak. However, some hospitals, like Cooley Dickinson, have determined that exposing health care workers to smallpox now presents an unwarranted danger to the patient population they serve.

“While there is no imminent danger of smallpox, the vaccination of hospital personnel poses a risk to patients at this time,” said Dr. Ira Helfand, president of the CDH medical staff, who added that he sees “no compelling reason at this time” to participate in the program.

“The risk is not confined to people who receive the vaccine,” he continued. “People who are vaccinated can transmit Vaccinia (the live virus in the vaccine) to family or patients with whom they are in close contact. We don’t think emergency department doctors or nurses who have been recently vaccinated should take care of patients until their period of contagion has passed.”

According to the CDC, the vaccine has historically been about 95{06cf2b9696b159f874511d23dbc893eb1ac83014175ed30550cfff22781411e5} effective in preventing smallpox infection, but about one in 1,000 who were vaccinated for the first time experienced reactions that, while not life-threatening, were serious. Up to 50 first-timers in 1 million experienced potentially life-threatening reactions, and it is estimated that 1 or 2 people in 1 million who receive the vaccine may die as a result.

Cooley Dickinson isn’t forbidding anyone from receiving the vaccine, but for that contagious period — typically 17 to 19 days, Helfand said — workers will be furloughed from the hospital. After that time, once the vaccine scab has fallen off, employees must be cleared for duty by the occupational health office.

However, Garb pointed out that the semi-permeable membrane dressings being used to cover smallpox vaccination scars today are more effective than those used during the 1960s.

“It’s an advanced barrier type of protection, and studies have shown that it’s effective in containing the virus,” he said, adding that Baystate employees with the scars will be required to have their dressing checked every day before the start of their shift to make sure it is applied properly and not draining anything. “If that’s the case, I think the risk to patients would be extremely low.”

Helfand said that, considering the risk of adverse reactions from the vaccine itself, some potentially lethal, health workers are better off staying out of the program. The risks are greatest, he noted, in people with weakened immune systems, such as from the HIV infection, or who are taking chemotherapy or have had organ transplants.

At Holyoke Hospital, the emphasis right now is on education, not necessarily the promotion or rejection of vaccinations, said Carol Wojnarowski, a registered nurse and manager of infection control.

“This is something we need to learn about. So we’re educating our staff on the benefits and contraindications of the vaccine and educating them on the state’s pre-event voluntary smallpox program. Our employees need to be very aware of these issues before they decide for themselves whether to participate in the program.”

Garb agreed that the education component is crucial, as health workers are dealing with a disease that has been effectively frozen in time for decades. More recent medical advances have never applied to smallpox simply because it was thought to have disappeared completely.

“Nationally, some major hospitals are not going to participate in the voluntary plan, and some of their reasons are valid,” Wojnarowski said. “There’s the liability issue, and from a scientific point of view, they don’t see an immediate need for it.” Another factor, she added, might be the cost associated with vaccinating employees — an additional financial strain in an already stressed health care system.

Given such factors, “they don’t want to participate in that until the issue genuinely arrives and vaccination has to happen,” she said. If that day arrives, Wojnarowski said, pre-event planning won’t be relevant, and the main issue will be immunizing all citizens.

Defending Cooley Dickinson’s position on current vaccination, Edwards said scientific evidence exists suggesting that the vaccine provides virtually the same level of benefit after potential exposure to the virus. “We know the vaccine is highly effective when given up to four days after exposure,” he said.

Garb said that it’s natural for physicians to have differing opinions on such a new and uncertain threat. But he suggested that some health workers are unwittingly downplaying the threat of smallpox, which afflicted millions of people only a few decades ago.

“It’s easy for us to forget that smallpox would be the nuclear bomb of bioterrorism attacks,” he said. “Even by doing this level of preparation, perhaps we’ll deter a terrorist from using it. That would be worthwhile, since any other agent is easier to deal with than smallpox would be.”

“This has been an eradicated disease worldwide, so it’s new to most of us,” Wojnarowski said. “We’re currently in the information-gathering process, and I think it’s safe to say that’s where many hospitals are.”

Cooley Dickinson, for one, has considered the available information and decided preventive vaccination isn’t the way to go just now. But the hospital will continue to consult with state officials on the issue.

“While we will not encourage voluntary immunization,” Edwards said, “we will continue to work with our advisory committee members and the DPH to outline a plan of action in the event of a bioterrorism incident.”

When it comes to smallpox, the hope that such a day will never arrive is perhaps the only sentiment upon which all physicians can agree. 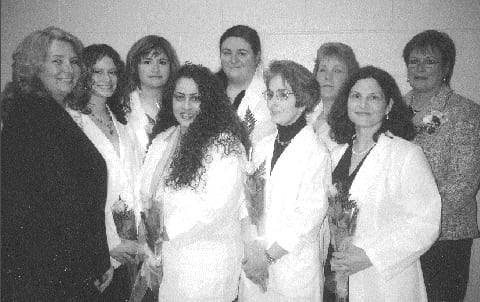 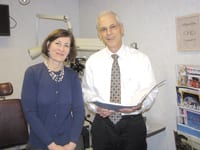