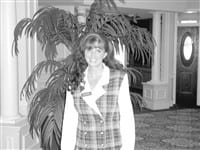 Delores Thimot gestured toward the Country Kitchen, where a woman wearing a tuxedo and bowtie was preparing the room for the lunch shift.

“Our residents are used to living a certain quality of life,” said Thimot, director of assisted living at The Village at Laurel Lake in Lee. “We’re just trying to continue that quality and incorporate it into all the services we offer.”

That extends to the restaurant-style dining; amenities such as a hair salon, cinema, and pub; and the 24-hour emergency care available, but here, quality of life means something more. It means accommodating people in different phases of their lives, assisted living being only one.

The facility, which opened in 1999, also features short- and long-term skilled care at the Laurel Lake Center for Health and Rehabilitation, as well as the Monarch Special Care Center, a residential program for seniors with dementia.

The end result, Thimot said, is not having to pick up roots and move to a new center when a resident’s needs change. In fact, of the couples that live at Laurel Lake, most live together in the assisted living apartments, but some reside in separate wings — but are still able to keep the same overall address.

“It’s a continuum of care,” Thimot told The Healthcare News. “Change can be hard, especially for older people, but here they make the change only once. “It’s a nice thing to be able to offer, and it’s something that more centers are starting to do.”

It was also part of the original design of Laurel Lake, which opened its nursing home component in May 1999 and the assisted living center just two months later. Commonwealth Communities, the property’s owner, boasts hospitals, elder care facilities, and other health sites across Massachusetts.

Also part of the design was to give residents a family atmosphere and a taste of the lives they had known living on their own. That’s why the Country Kitchen isn’t a cafeteria-style eatery, but a full restaurant, with at least five main-course options at every meal. And those tuxedoed waiters and waitresses, of course.

There’s a club room, a library, an exercise room, passenger vans to take residents to outside appointments, and a nurse on staff in the wellness clinic, as well as a nurse’s assistant available around the clock for emergencies.

It’s not cheap — apartments rent at between $2,400 and $4,300 per month, including meals, amenities, and utilities — and while most residents live on a private-pay basis, some have long-term care insurance, while 12 others are on a Medicaid-based program called group adult foster care, a program that could be threatened by Gov. Mitt Romney’s proposed budget cuts.

Currently, Laurel Lake boasts 36 assisted living apartments and 88 long-term care and subacute rehabilitation beds. The newest addition is the Monarch Center, 26 beds of dementia care. And that’s a program that has seen significant changes since its inception.

For instance, Thimot said, Monarch was having trouble with patient falls when it decided to tackle the problem partly by keeping residents less idle.

Each day, Monarch residents also branch off into individual activities, often reflecting that person’s past career, she said. For example, the staff set up an area for a former neurosurgeon to handle medical equipment, such as stethoscopes, while a former homemaker was pleased to be folding clothes again.

“These are the things that made them successful in life, and they’re able to feel successful here,” Thimot said.

The activities put a family-oriented face on the real reason these residents are at Monarch, which is to partake in the medical and support services for seniors with neurological, behavioral, and emotional disorders, from diagnostic evaluations and medication oversight to behavioral management and individual, group, and family counseling. The community-like setting, she said, simply provides a microcosm of the outside world with emphasis on safety, structure, and the potential for healing.

No one is forced to partake in the daily schedule of recreational and enrichment events, she added, but virtually all participate, and “it has decreased the number of falls and also given our residents a much higher quality of life.”

Such efforts to create a life for residents, not just a place to eat and sleep, also affects Laurel Lake employees in positive ways, Thimot added. “It gives them a feeling of accomplishment. You can see the effect on them. You see the smiles on their faces. It’s not just a job.”

As a result, the small touches have flourished at the facility, such as a spring ball — residents danced past midnight — to visits from Tanglewood musicians, who performed a concert in the lobby.

“We’re trying to make every day as happy as possible for them,” she said.

And not just for long-term residents. Laurel Lake’s short-stay program allows brief visits to either try out the facility or simply give a senior’s family or caregivers a short vacation. These stays range from a week to two or three months.

In its almost four years of existence on Route 20 in Lee, Laurel Lake has seen plenty of seniors plant new roots there. To hear Thimot tell it, quality of life is all in the attitude — and in the small touches.

“We kind of liken it to a grand hotel,” she said. “That’s what we’re trying to project to the residents.”

That’s why a tuxedo isn’t just a tuxedo. It, along with other details, is symbolic of a long life enjoyed — a life that doesn’t have to shut down in the elder years.
It might not be a hotel, but it’s home. 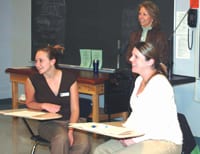