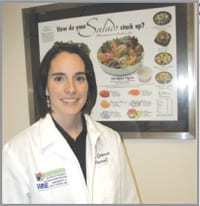 They started in the cheese aisle.

That’s where Kam Capoccia, clinical associate professor at Western New England University, says she often begins the grocery-store tours she’ll conduct with a patient, or, as was the case in this instance, a patient’s spouse, because cheese is a staple in most households.

“I traditionally have them show me what they buy and how much they eat, and then I’ll give them a better choice, a healthier choice,” said Capoccia, noting that ’better,’ when it comes to cheese or most everything else in the store, means something with less fat and less sodium, and usually in a considerably smaller portion. “Serving size is a huge teaching tool.”

Tours of the wide aisles at the Big Y on Cooley Street in Springfield comprise just a part of the job description that has evolved for Capoccia as supervisor of the Consultation and Wellness Center at that store created through a partnership between Big Y and the university. Other duties range from educating people with type 2 diabetes about their disorder and how to control it, to helping a patient monitor and improve their blood pressure.

She’s been performing such work since the center opened more than 15 months ago, and over that time has found some effective and colorful ways to describe not only what she does free of charge, but how she does it.

“I like to say that I serve as a bridge between the patient and their health care provider,” she told HCN, noting that, while she doesn’t treat people clinically, she works in consort with those who do to help keep patients on a course to better health and well-being.

“I’m a second set of eyes,” she went on, using another term to describe how she will often a review an individual’s medical records and especially their medication regimen with the goal of identifying problems or perhaps new and different courses of action.

Through its first 15 months, there are many different kinds of measures showing that the center can be considered a huge success. They range from Capoccia’s ultra-busy calendar — she’s booking new patients four to six weeks out — to current exploration of new sites to expand the concept to other Big Y stores in this region.

But maybe the greatest evidence comes from statistical data showing that a patient’s blood sugars are improving, for example, and also in the form of e-mails and handwritten notes from patients’ primary care physicians praising Capoccia for her efforts — and positive outcomes.

“I have several notes from doctors saying, ’I don’t know what you’re doing, or how you got this patient to do this, but I’ve been trying for years and haven’t gotten such results.’ That’s very, very rewarding, and it tells me that this model is working.”

For this issue, HCN goes behind the scenes at the center to provide an indepth look at a facility that is meeting a critical need in the region — and drawing results.

When asked for a composite sketch of what she does at the Consultation and Wellness Center on Mondays, Wednesdays, and Fridays, Capoccia started by talking about some recent work with patients, including that supermarket tour, which she wrapped up just before her interview with HCN.

“That was a 60-minute visit,” she explained. “The first 40 I spent going through the patient’s diabetes, his blood sugars, his diet, and even another condition he has — a runny nose. When I finished up with him, I took his wife out into the aisles because she does most of the shopping and the cooking.”

Meanwhile, Capoccia works extensively with patients suffering from hypertension and/or an affliction referred to in the industry as ’white coat blood pressure,’ meaning the elevated readings often resulting from the tension created from having one’s BP checked by a health care professional.

Capoccia wears her white coat when she first takes someone’s blood pressure, and that’s part of the evaluation process, she said, adding that she will also often have the patient wear a sphygmomanometer, or what’s known as a blood-pressure cuff, a device that monitors BP at regular intervals (every 15 minutes during the day and every 20 at night) and when there are no white coats in sight.

“You take the first measurement here in the office, and then the person goes out for 24 hours, and their blood pressure is beautiful,” she explained, adding that, in many cases, analysis of the cuff’s readings show that the first and last measurements (both in the office) are considerably higher than the rest, indicating that a real problem doesn’t exist.

Also, there was and is considerable work in conjunction with the year-end holidays. Last month, for example, Capoccia was handing out a number of informational items, such as one titled A Diabetes-friendly Guide to a Healthy Thanksgiving Plate. Among the suggestions was this one under the category ’protein’: “fill ¼ of your plate with lean turkey slices … avoid dark meat (including drumsticks) … remove the skin from the turkey before eating … instead of gravy, use a fruit-based relish for a special kick.”

And then there was the case of the woman who came to Capoccia with her two-inch-thick medical file, looking — and hoping — for an answer to consistently low potassium levels.

Capoccia said the patient’s primary care physician couldn’t find an answer, and the individual wasn’t satisfied with the recommendations of a nephrologist to whom she was referred. So she went to the center for that proverbial other set of eyes.

And upon looking at the patient’s file and medication regimen, Capoccia concluded that one of her blood-pressure medications, a diuretic, or water pill, was the cause of the problem, with the patient excreting potassium through her urine.

It was with all (or at least most) of these scenarios in mind that Evan Robinson, dean of the School of Pharmacy at Western New England University, and Mike Semanie, director of Pharmacy for Big Y, began discussions more than two years ago on how to collaborate on a wellness and consultation facility.

They started with what Robinson called the “pharmacist as educator” model, a service that fit well within the missions and operating philosophies of both the university and its new College of Pharmacy and the supermarket chain.

“The broad purpose was and is to help with the wellness of our customers,” said Semanie. “We had the Pharmacy Department, which works in collaboration with Kam at the center. So not only can people get their prescriptions filled, they can get advice, especially with diabetes, but also with other diseases; it’s been mutually profitable for both parties.”

Following preliminary discussions on the concept, Robinson and others at the university conducted some field research on the matter, visiting some pharmacist-led clinics in Virginia and North Carolina. They borrowed heavily from what they observed, said Robinson, but the center eventually created in Springfield is in some ways unique.

Indeed, while some of the clinics officials visited featured a pharmacist dispensing drugs, counseling, and educating, the Springfield center focuses strictly on the educational component, and is the only facility of its kind in a grocery store.

“We went and looked at what people are doing,” he said, “and then said, ’how can we learn from their successes and put it into a spin all our own?’”

The key elements in the equation were finding the right model, the right place to begin (the Cooley Street Big Y was chosen because of its location and available square footage), and the right person to lead the operation, said Robinson, noting that Capoccia has certainly proven to be that individual.

Her résumé includes everything from a stint as a pharmacy manager for a Walgreens in Worcester to work as a clinical pharmacist at the Family Medical Center at the University of Washington, with many other stops as well.

She said she came to Western New England University in 2010 with an eye toward fulfilling what she described as her two main passions: teaching and patient care. And the center has become a perfect outlet for both.

“I use the word ’patient’ to describe the people I see, because to me, this is patient care,” she explained, adding that ’customer’ is preferred by some associated with the facility, especially on the Big Y side.

Robinson told HCN that all those involved with getting the center off the ground knew it wouldn’t be a case of ’build it and they will come,’ especially with a facility of this unique nature.

So the official opening of the center was accompanied by a lengthy and thorough awareness-building process that included not only potential patients, but also their primary care physicians and staffers at the nearby Riverbend Medical Group and similar facilities.

“You have to generate awareness around the quality of the product,” he explained, “and then you have to link the quality product to value for them.

“Letters were sent to physicians explaining what we would be doing,” he continued. “We told them this was a resource and a point of collaboration and a value-added proposition for the patient that was complementary, not duplicative.”

Patients to the center are both self-referred and referred by their health care provider, said Capoccia, adding that total volume over the past year has exceeded 200 visits. Translating that number, she said the facility has far exceeded its three-year goal in just over 15 months.

Such performance certainly helps explain why there are ongoing discussions about establishing additional centers at some of Big Y’s 62 stores across Massachusetts and Connecticut, said Semanie, describing current work in this regard as “exploratory.”

He expressed confidence, though, that the model created at the Cooley Street facility will be replicated elsewhere.

Meanwhile, Capoccia says her full schedule book, the soaring patient-visit count, and those notes from physicians provide ample proof that this concept works, as well some of the many types of rewards she gains.

Capoccia said many of those trips to the cheese aisle begin or end with a strong recommendation that the patient or spouse in question look for the words ’low-fat’ on the label and put those items in the cart.

And such suggestions are sometimes met with a little skepticism and questions like, ’do you eat this stuff?’ she explained, adding that she answers in the affirmative, as she does when asked about sugar substitutes and other items that fall into that ’something better’ category she described earlier.

And it’s quite obvious that people are listening, and making full use of that bridge between the patient and their health care provider.

Indeed, the center’s strong track record to date shows that good things happen when there is a pharmacist dispensing a steady diet of information and support. 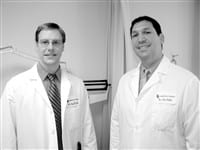