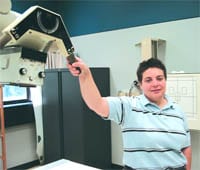 That is, they’re drawn to one of the more cutting-edge fields in medicine — radiology. Holyoke Community College offers an associate’s degree program that sends 25 graduates each year into the field as radiologic technologists, a critical role in hospitals, medical clinics, and even private industry, and one prone to the worker shortages that afflict most allied-health careers.

“We get a lot of people re-entering the workforce or going back to school after being in another type of business,” said Holly Martin-Peele, director of HCC’s Radiologic Technology department. “A lot of these students are considered non-traditional. Although we also have some who are just starting out, even they usually have a little college under their belts.”

Due in part to the increasing popularity of the so-called rad tech career — spurred in part by heavy marketing of the career by radiology organizations after years of severe worker shortages — HCC has been able to make it a highly competitive program.

“First, we take the applications and assign point values to certain things, like whether they’ve taken science courses or had experience in the health care field,” said Martin-Peele, describing a process that begins at the Feb. 1 application deadline.

“We’ll take the top-50-scoring applicants to do job shadowing, spending some time at clinical sites,” she continued. “They’re scored on how they perform — do they show up on time, dress and act appropriately, that kind of thing. The top 25 scorers overall, when we add the application and job shadowing together, are the ones we accept into the program.”

After they’ve finished the program, graduates have to take the National Registry Board exam, and once they’ve passed that, they’re eligible for licensure within their state.

One of the draws of radiology in general is the excitement about ever-improving imaging technology, Martin-Peele said.

For example, “when I started out in CT, we had only a single-slice scanner at the hospital I worked at. Then there were 16-slice, and 64-slice, and now they’ve come out with 256-slice, flat-panel scanners, and they can do cardiac work, virtual colonoscopies, those types of things. Everything is really advancing quickly now with CT and PT, and the systems are constantly evolving as new technology comes into play.”

But Martin-Peele was quick to note that radiological technologists are not mere button-pushers, as the field involves plenty of human contact, making it ideal for people who have an interest in both the high-tech and high-touch sides of medical work. “There’s a lot of patient care involved,” she said.

Like many allied-health fields, radiologic technology has gone through recent worker shortages, although the demand is not so dire today as it was a decade ago. According to the American College of Radiology (ACR), demand for rad techs in the U.S. greatly outstripped supply throughout the late 1990s and peaked in 2000, when vacancy rates for reached an average of 18{06cf2b9696b159f874511d23dbc893eb1ac83014175ed30550cfff22781411e5} nationwide.

To combat the shortage, the ACR and the American Society of Radiologic Technologists (ASRT) launched a series of aggressive recruitment and retention initiatives designed to boost the number of technologists. These campaigns have resulted in rising enrollments in educational programs and a greater number of new technologists, and the national vacancy rate had dropped to 12{06cf2b9696b159f874511d23dbc893eb1ac83014175ed30550cfff22781411e5} by 2003, where it has largely stabilized.

Martin-Peele said vacancy rates in this region fluctuate, and the shortages aren’t so pronounced as in other fields. But clearly, opportunities still exist — and one of the draws of radiology is the variety of work, and work settings, available to graduates.

Specifically, diagnostic radiographers use imaging equipment to produce pictures of the tissues, organs, bones, and vessels of the body. Some radiographers specialize in mammography, computed tomography (CT scans), magnetic resonance imaging (MRI), or other types of imaging. Sonographers use high-frequency sound waves to create images of anatomy. Nuclear medicine technologists use radiopharmaceuticals and special cameras to produce images of organs and reveal their function. And radiation therapists administer highly focused forms of radiation to treat cancer and other diseases.

Certain of these fields require additional education, Martin-Peele said. For example, ultrasound requires additional training outside the clinical site, while CT, MRI, and mammography offer on-the-job training while moving toward whatever licensing is required by the state.

One effort launched by the ACR and ASRT in 2003 to make the field more attractive was to create expanded clinical role for radiologic technologists, called the radiologist assistant (RA).

This new role was two-pronged: to relieve some of the time pressures experienced by radiologists due to increased workloads, and to address the shortage of radiologic technologists by creating an expanded career path. The RA is a sort of advanced-level radiologic technologist who works under a radiologist’s supervision to enhance patient care. Students that graduate from a two-year program such as HCC’s have the option of enrolling in a bachelor’s degree program with RA certification in mind.

While an RA may provide observations on medical images that he or she has taken to the supervising radiologist, the individual would not interpret medical images. Nonetheless, the expanded role is an intriguing one for many people looking at radiology as a second career — or even a first.

“The technology is always advancing,” Martin-Peele said, “and there are certainly places to go, things to learn, and paths to advance.” 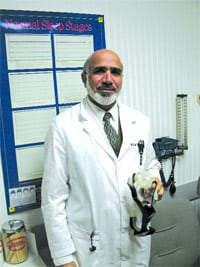 Let’s Do More to Prevent HPV