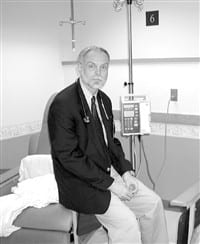 After being bombarded with media messages about the myriad factors that might cause cancer, the reverse — news of what might inhibit the disease — is welcomed by many.
But both types of reports should be taken with a grain of salt, said Dr. Wilson Mertens, medical director of Cancer Services for Baystate Health System. In most cases, he said, people are getting only half of the story — if that.

In the case of the ovarian cancer report that emerged from the University of South Florida College of Medicine in Tampa, the study is being trumpeted in the press before it has even advanced to the human trial stage. Other studies are reported — and acted upon — without an understanding of long-term patterns.

“I’m not sure this is news you can use,” he said of the aspirin findings. “It’s very early.”

However, he told The Healthcare News, for cancer patients desperate for some kind of relief, such studies, as early-stage as they may be, offer hope — often without much basis.

The Florida study, conducted by Dr. Janet G. Drake and Dr. Jeanne L. Becker, showed that treating ovarian cancer cells with aspirin inhibited growth of those cells. Past studies have suggested that aspirin might prevent the development of other forms of cancer, such as those of the breast and colon.

In this latest research, reported in last month’s issue of Obstetrics & Gynecology, Drake and Becker exposed ovarian cancer cells to low and high concentrations of aspirin. While a low dose of aspirin had little effect on the spread of the cells, a dose five times higher inhibited the cancer cells by 68{06cf2b9696b159f874511d23dbc893eb1ac83014175ed30550cfff22781411e5}.

The researchers also studied aspirin’s specific effect on HER-2/neu, a protein that can be found in abnormally large amounts in ovarian, breast, and endometrial cancer cells. The exact role it plays in ovarian cancer remains unclear to doctors.

Drake and Becker found that treating cells with the highest aspirin dose reduced the level of the protein to less than one-fourth of its original level. Furthermore, adding a therapy designed to block the action of the HER-2/neu receptor reduced the growth of tumor cells by 82{06cf2b9696b159f874511d23dbc893eb1ac83014175ed30550cfff22781411e5}.

The pair conceded that the mechanism by which aspirin inhibits ovarian cancer cell growth remains unclear, but suggested that the drug may stem the spread of the disease by releasing cyclooxygenase, an enzyme that is often present in high levels in cancers of the colon, breast, and stomach.

It all sounds like a promising breakthrough. But, as Mertens pointed out, treating cells in a controlled lab setting is a far cry from having that kind of success in human trials, and the findings should be treated with skepticism until advanced trials get underway.

“It’s not an experiment in humans, but rather an exposure of cancer cells to aspirin, and though it’s good news that the cancer cells did not grow, it’s impossible to know from this study whether this is going to be appropriate for prevention or not,” Mertens said. “We don’t want cancer, and if we have it in the body, we want to kill it. Those are two separate things.”

And prevention of ovarian cancer is indeed a separate issue, the study authors noted. But finding preventive drugs is crucial in this particular disease, they said, since most women with ovarian cancer have few or no symptoms and are not normally diagnosed until the later stages of the disease.

“That’s another piece to the puzzle,” Mertens said. “Is this going to be effective in preventing clinical ovarian cancer, and what dose is going to be required?”

Questions like these, he said, are why it can be irresponsible to tout breakthroughs in the general news media when only the simplest of trials have been completed and so many questions remain unanswered. No doubt many women saw the headlines and rejoiced, but they shouldn’t, he said — at least not yet.

“The sad part, to me, is that patients are desperate, and maybe their treatment options are limited,” he said. “Someone is being manipulated by this into thinking that it is something that will be available in a few weeks, when in fact it’s more like a few years, if ever.”

In fact, Mertens speaks quite often on these types of media reports and their impact on health consumers.

Sensational health news commonly arrives in two forms, he said: reports of promising new treatments for diseases, and warnings that a certain food product will cause cancer or is otherwise damaging.

A recent Swedish study, one that connected certain fried foods, including french fries, with increased cancer rates, is only the latest scare. Another was a report connecting heavy coffee intake with pancreatic cancer.

“The problem with that kind of study is that it depends on the population and how many other variables were put into the calculator,” Mertens said. “It might not be coffee; it might be something associated with the coffee, or they may be exaggerating the relationship way out of proportion.”

Similarly, a notable study of leukemia rates among people who live near high-tension wires failed to take into account the number of years it takes for cancers to develop — and the fact that some of the subjects were living in different environments when leukemia likely first showed up, he said.

Take Two Of These

In the end, perhaps Drake and Becker are onto something, Mertens said. But it’s impossible to tell when the only study has taken place in the controlled environment of a lab.

“When they get into human trials, a lot of those variables will no longer be controlled, and they shouldn’t be,” he said. “People come in all different shapes and sizes, so there has to be some variability wired into the study.”

Many other potential cancer treatments that looked promising in the lab weren’t usable, he said, sometimes because the necessary dose was unsafe for humans or the variability of the cancer cells was such that only a small portion of the trial group responded positively.

“People should be suspicious when it’s purely a laboratory phenomena at work,” Mertens said. “More work needs to be done.”

And, if the potential of aspirin still seems promising after the next trial phase, women can be sure that someone will be trumpeting the news.

Shriners to Host Walk for Love Walkathon and Barbecue