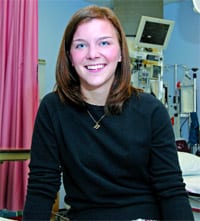 Editor’s note: Heart disease, heart attacks, and strokes can affect anyone, at any age. Despite its prevalence, however, many people remain unaware of this major health problem until it strikes them without warning. In this special section on cardiovascular health, The Healthcare News talks to two women, born decades apart, who were fortunate to survive their first encounters with heart attack and stroke — and learns how their experiences have changed their perceptions.

Aileen Donnet said her heart attack was a “wake-up call,” one that she’s taking seriously.

Five years ago, Donnet’s perception of her health — and how her decisions impact it — changed dramatically one afternoon.

“I was working as a contractor for The Reminder, and all I can tell you is, I felt extremely nauseous,” Donnet said. “I decided, this isn’t right, but I didn’t really know what was going on. So I did a dumb thing — I got in my car to drive home.”

Her face was flushed at the time, which at first she thought was a side effect of her rosacia. But when Donnet called her doctor, a nurse told her to take an aspirin and get to the hospital immediately, so her husband rushed her to Wing Memorial Hospital in Palmer.

“I have to give the hospital credit,” she said. “Although it was an unusual nausea, I didn’t have any other symptoms besides that, but they told me my blood work was a little bit off, and they’d like to keep me for observation.”

Later, she was transferred to UMass Medical Center in Worcester for further tests. After an angiogram, doctors decided to control the effects of the episode with medicine and rehabilitation, and indeed, she has been going to rehab the past four years, with no relapse.

Donnet said she was diagnosed several years ago with peripheral arterial disease in her leg, but doctors never made the connection between that condition and the fact that an artery could be blocked in the heart as well.

“You could say the heart attack was a surprise,” she said, noting that she had quit smoking in 1992. Perhaps more important than her health history, though, was her family history, as demonstrated by her father’s heart attack at 59. She has learned since her own heart attack that risk factors aren’t necessarily death sentences — but the longer someone puts off healthy lifestyle decisions, the more difficult it is to avoid trouble down the line.

“When we’re young, we eat improperly, and we think we’re invincible,” Donnet told The Healthcare News. “We eat fatty foods, things we shouldn’t eat, and we think it can’t happen to us.”

Now, she’s on a mission to help her family understand how diet and activity can impact the heart.

“I have a son I’m trying to talk to about how he should watch his diet, but he’s 35 years old, and he’s not going to listen to me,” Donnet said. “I have another one who’s 38 and married, and he’s a little smarter.”

Beneath the mother-son banter, Donnet has very real concerns about the health of her kids, knowing that predispositions to heart disease don’t necessarily skip generations — and the choices people make throughout life can reap serious results years, even decades, later.

“The odds are quite strong that they’ll face heart disease somewhere along the line,” she said. “For me, my heart attack was a wake-up call. Now, it’s very important to me to follow up with my dietitian and learn to eat properly. And to continue to exercise, of course. You can’t curl up and stop moving. You have to stay active.”

Indeed, after Donnet recently turned down a job offer with Hallmark, her doctor advised her not to fear new challenges.

“He said, ‘don’t give up completely; it’s much better for your health if you’re up and about. Find something to do.’”

“I consider myself very fortunate,” she said. “I’ve read articles that say often women aren’t diagnosed properly, and their symptoms are ignored. I just feel like I received excellent care, no question about it.”

In turn, she’s taking better care of herself. “And,” she said, “I think I’m a little wiser now.”

The evening of Oct. 10, 2006 was a normal one at Mount Holyoke College for Marissa Arnold. She had been doing homework in her dorm room before heading downstairs to hang out with some friends.

One of those friends, a soccer teammate, was braiding Arnold’s hair when something strange began to happen to the 20-year-old.

“I didn’t know it at the time, but I started to have stroke symptoms,” she said. “I got a headache, my vision got blurry, and I started to have trouble understanding the conversation my friends were having around me. My right side felt completely paralyzed, and when I started to get up, I knew something was wrong.”

Arnold couldn’t speak, but thanks to the quick action of her friends and the college’s Public Safety staff, an ambulance was summoned, and she was taken to Holyoke Medical Center.

“They were under the impression that I had had an embolic stroke,” she told The Healthcare News. “They gave me a CT scan and saw that I had a block in my brain, at which point they administered a clot-busting drug. But the clot was fairly large, and the drug didn’t do enough to get the blood flowing again to the brain, so they decided to send me down to Hartford Hospital.”

“It’s a small wire catheter inserted into the groin and threaded up to the brain, where it attaches to the clot and takes it out,” she said. “After that procedure, I felt much better immediately. When I woke up the following morning, I was a little shaky, and my right side was still weak, but I could move a lot better.”

Arnold was discharged a few days later from Hartford, after coming to grips with a few minor issues, such as diminished handwriting. “When I tried to write in the hospital, it was messy, but I got better every day,” she said. “And by the time I left, my facial sag had gone away, and I was able to talk more clearly.”

A week and a half after her discharge from Hartford Hospital, Arnold — a junior double major in History and Spanish who is eyeing law school after finishing her undergraduate work — returned to classes, still struggling to regain full handwriting control but pleased that there were no other lingering effects.

“From where the clot was lodged in my brain, the doctors said that one thing that could be mildly affected was motor skills,” she said, “but the writing was the only side effect. I think the fact that I got the best care, and got it so quickly, contributed to my recovering so quickly.”

Arnold said she has had many follow-up tests, but doctors still don’t know why she suffered her attack. Embolic strokes are rare in people her age — particularly fit, active people like herself — but they often arise from a congenital hole in the heart, Yet, that’s not true in this case.

“I’m under the impression that being in shape and working out a lot can cause the blood to produce more clots,” she said, and at the time she was taking birth control, which doctors say carries a clot risk. She’s off the pills now and has undertaken a regular aspirin regimen; doctors say a recurrence at her age is “astronomically low,” she reported, even with the previous incidence.

Arnold does feel fortunate in one other regard: MERCI is available only in about 240 hospitals nationwide, and only two in this region outside of Boston: Hartford and UMass Medical Center in Worcester. In addition, the procedure was officially approved by the U.S. Food and Drug Administration just last August, a mere two months before a late-night hair-braiding turned into something unexpected and hair-raising.

“The technology that was used on me is brand-new,” she happily told The Healthcare News. “Without that, I might not be here today.” 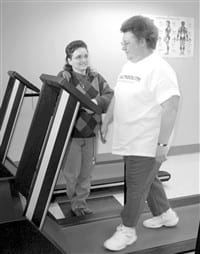 The Clock Is Ticking The Deadline For HIPAA Compliance Is Fast Approaching; Doctors Urged To Be Ready