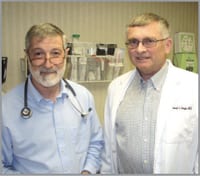 Dr. Ira Helfand says the staff at the Family Care Medical Center in Springfield may eventually get around to doing something this year to officially mark the facility’s 30th anniversary, but at present, people are simply too busy to have any kind of party.

But that doesn’t mean there isn’t anything to celebrate at the urgent-care facility that has been at the same location on Allen Street since the start. Actually, there’s plenty.

For starters, there’s the sustained, steady growth that Helfand and partner Dr. David Doyle have orchestrated since they acquired the business six years ago from founder Dr. Ty Matthews after working for him for many years. There’s also continued diversification of the center — which now handles everything from camp and school athletic physicals to a host of urgent-care matters; from physical therapy to suboxone treatment for those with opiate addiction — a key source of that growth.

And then, there’s the fact that the center is still thriving long after many competitors have opened their doors — and then eventually closed them because their operating model wasn’t profitable. “We’ve seen a lot of them come and go,” said Doyle, referring to rival urgent-care facilities.

But what is perhaps most celebration-worthy, said Helfand, is that the center has become what he considers “a community institution,” a part of the fabric of the Western Mass. health care sector.

For this issue. HCN takes an indepth look at just how the FCMC has gained institution status in this region, and how it intends to continually build on the success that has enabled it to reach a notable milestone like 30 years and boast shelves crowded with those thick files Helfand described.

There were about 15 people in the waiting room at the FCMC when HCN visited the facility in the late afternoon on a Friday in mid-April. That’s typical for the center, said Helfand, noting that its staff will treat 90-100 people per day, on average, numbers that have remained fairly constant through the years.

And those waiting at that particular time represent the many different reasons why people come to the center, he continued, noting that some required attention but couldn’t get an appointment with their primary-care physician for several days or even weeks, while others could have opted for a hospital emergency room, but were wary of a lengthy wait that has become the norm in such units. And still others have less-urgent needs that don’t require a visit to an ER or PCP — and thus can be handled at the center.

All these reasons explain why the FCMC and other urgent-care facilities were created, said Doyle, noting that this type of facility is certainly not a recent phenomenon. But they don’t make clear why this facility has succeeded while others have not.

The explanation for this lies in the center’s ability to essentially provide what it promises — quality, compassionate care that is usually administered in an hour, on average, he told HCN, adding that the answer also lies with a staff that boasts many who have been at the FCMC for decades and thus understand the large and diverse population it serves.

The center’s successful track record is reflected in the fact that the vast majority of new patients are derived from word-of-mouth referrals from existing clients, said Helfand. “We’ve never done much marketing, mostly because we haven’t needed to.”

Backing up a bit, Helfand and Doyle said they both started in health care as emergency-room physicians and worked together for many years at Cooley Dickinson Hospital in Northampton. But both were attracted to the urgent-care model, and more specifically, the one in place at the FCMC.

Helfand and Doyle said many things have changed since 1982, and even since 2006, including the advent of health-care reform in Massachusetts, which has mandated insurance coverage for all residents (bringing some logistical and bureaucratic challenges), as well as ever-improving information technology and a constantly changing competitive landscape. But some things haven’t changed, he went on, including the factors that gave rise to urgent-care facilites.

In fact, some of these have become more exacerbated in recent years. This includes the declining numbers of primary-care physicians — a phenomenon that exlplains those issues of accessibility — and the still-growing use of the hospital emergency room as a PCP among some constituencies, creating more crowding and longer waits.

“I think people have more difficulty accessing their primary-care physician,” said Doyle. “When they have an urgent problem, they’ll call their primary care, and not be able to see him or her for weeks or months; they might have an acute infection, allergic reaction, poison ivy, a sprained ankle, and need some attention. Also, emergency rooms are overutilized, and we are able to see a lot of the minor emergencies.”

Helfand concurred, and noted that being able to help people impacted by these converging forces in health care is one of the most rewarding aspects of working in an urgent-care setting.

“So many patients in the emergency room are just so unhappy,” he said by way of contrasting his current work assignment with the one he had several years ago. “They’ve been waiting for hours — even in the best emergency rooms. So many of the patients who come here are just so pleased that they can be seen by a doctor, get treated, and get discharged in an hour or an hour and 15 minutes.”

Today, the FCMC provides a host of services it has offered since the beginning, such as school and camp physicals; primary-care services for those suffering from hypertension, diabetes, and other conditions; and urgent care for everything from flu-like symptoms to urinary infections to lacerations. The center also offers lab and X-ray services, FAA exams, psychological counseling, and orthopedics, and has an on-site physical-therapy facility.

In recent years, though, the center has added additional services, such as the suboxone practice for opiate addiction involving heroin, but also pain medications such as oxycontin. Suboxone is an alternative to methadone, and one that Doyle believes is more effective.

“We feel strongly that works much better than methadone,” he explained, adding that the number of patients being treated for opiate addiction continue to rise, and the extent of the problem isn’t generally understood.

“When we started doing this five years ago, experts estimated that there were 1 million people with opiate addiction,” he continued. “Now, they’re saying 4 million to 5 million, and it’s probably many times that number.”

As he talked with HCN in the center’s conference room/break facility, Helfand helped himself to one of the large chocolate-chip cookies from a box someone had left on the table.

“This is our celebration, I guess,” he joked, noting that, while 30 years in any business is a noteworthy achievement, and three decades in this one is certainly an accomplishment, nothing elaborate is planned to commemorate what started in 1982.

Instead, the FCMC will celebrate by doing what it has always done, and that’s meet a need, and do so in an effective, patient-friendly fashion.

In other words, it will go on being a community institution.