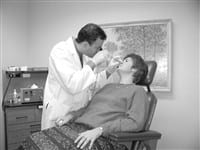 Every year at this time, winter segues into spring with a few certainties. Temperatures will gradually rise, plants and grass will spring to life, and the air will ring with the sneezes and wheezes of allergies.
But some people who believe their congestion and sinus pain are the result of allergies or a cold may be mistaken — they actually may have sinusitis, a condition recognized by physicians only in the past few years but which is, in fact, one of the top three chronic medical conditions affecting Americans.

Colds, flu, and allergies can all lead to chronic sinusitis, which is an inflammation of the lining membrane of paranasal sinuses, leading to pain and pressure from the impairment of the natural drainage of the sinuses.

While most cases may be treated with a regimen of antibiotics, nasal steroids, and oral or topical decongestants, in more severe cases, endoscopic surgery may be recommended to open the sinus passages and allow for normal drainage.

That’s the bad news. The good news, according to Dr. Jerry Schreibstein, is that advancing technology has made sinus surgery less traumatic and more accurate than ever before.

As Schreibstein, the director of the Minimally Invasive Sinus Surgery Program at Baystate Medical Center, told The Healthcare News, modern sinus surgery is usually performed entirely through the nostrils, leaving no external scars and only minor swelling and discomfort. The procedure is one of many ways in which imaging instruments are being used to repair medical problems from the inside and get patients back on their feet more quickly than ever before.

Prior to the advent of endoscopic technology, surgery to clear abnormal and obstructive tissues from the sinuses was performed from behind the gums and cheeks. Because it was a ‘blind’ procedure, the surgery often cleared out healthy tissue in the process, Schreibstein said.

These days, the minimally invasive procedure involves the insertion of an endoscope, a very thin fiber-optic tube, into the nose. Using state-of-the-art micro-telescopes and instruments, the surgeon is allowed to make a visual examination of the openings into the sinuses and remove the abnormal tissues.

“We’re able to take a much more focused approach to just that area where there is diseased tissue,” he said. “With the advent of endoscopes, we’re able to look directly at the sinus opening and remove the diseased bone or tissue polyps that might be blocking the natural opening of the sinus and open up the natural drainage pathway.”

At Baystate, Schreibstein uses a Radionics Optical Tracking System (OTS), an image-guided navigation system. The OTS combines a computer work station with an optical camera array and instruments that can be tracked by the camera and observed by the surgeons on a monitor in real time.

After having a CT scan digitally loaded onto a computer in the operating room, Schreibstein said, the patient is “registered” to the computer like a global positioning system.

Once the patient is localized in the room by the camera and computers, the OTS is able to determine the precise location of any area in the sinuses, within millimeters. During the operation, the surgeon follows two monitors, one showing live video and the other displaying the OTS representation of the CT scans. In effect, Schreibstein said, the OTS provides a sort of road map through the sinuses for surgeons to follow.

He noted that endoscopic surgery is a delicate procedure in the sinuses, which are bordered by the orbit on one side and the brain above, and therefore requires precise movements. Meanwhile, in such a directed operation, the challenge for surgeons is to remove every bit of diseased tissue.

The advantages of this type of surgery are obvious, Schrebstein said: the procedure is less extensive, removes fewer normal tissues, and can often be performed on an outpatient basis. The ‘headlight bruising’ around the eyes often associated with traditional surgery in the past is no longer a problem. After surgery, patients are generally allowed to return to their normal activities within four days, and full recovery takes about four weeks.

“There’s clearly less discomfort, and there are no incisions anymore,” he said. “We’re able to use much less packing and, in some cases, even dissolvable packing, so there’s less discomfort.”

That’s an especially positive development, he said, considering how extensive a problem chronic sinusitis is. Endoscopic surgery is used for a variety of conditions, to be sure, such as nasal polyps. But sinusitis is a more common problem than many people realize — and one that often requires more than medication.

Acute bacterial sinusitis often begins when sinus cavities become irritated and inflamed, usually during a cold or allergy attack, Schreibstein said. The inflamed tissues prevent the sinuses from draining properly, causing sinus congestion. Bacteria then multiply in the blocked sinus, leading to an infection, which can last for more than 10 days. Antibiotics are sometimes warranted, but self-treatment with over-the-counter drugs may actually be harmful.

“Some people will treat their sinusitis with antihistamines, which are really for allergies, or decongestants, which are for colds,” Schreibstein said.

“Also, many people purchase topical decongestant nasal sprays, which are addicting and should not be used beyond three days. And using antihistamines if you have a true sinus infection can cause more harm because they’re drying and don’t allow the infected secretions to drain properly.”

Schreibstein admitted that most people don’t think of seeing a doctor for springtime sinus troubles, even particularly uncomfortable ones. But some people do require a surgical procedure — fortunately, one that has become less traumatic — and successful — than ever before.

“By doing a directed approach, we’re improving the natural drainage passage, so patients have a much better success rate,” he said. And that news should have plenty of people breathing more easily.

The Effects of Defensive Medicine on Health Care