Hank Porten says that in many ways, hospitals in the Commonwealth are merely being asked to operate just as any other business might in today’s global economy.
This would be the real world of profits and losses, where business decisions — such as those about buying new equipment and adding new health programs — must be made judiciously, balancing risk with reward.
But there are some important differences that make life in this so-called real world somewhat surreal for hospital administrators, said Porten, President of Holyoke Hospital. For starters, hospitals, by and large, can’t choose the markets they want to be in — they have a mandate to provide a full range of care to the entire population. Also, hospitals can no longer control what they will be paid for a particular service, and, in some cases, they are paid a little more than half of what it costs to provide a service.

“It’s as if I walked into an appliance store, pointed to a $4,000, 120-inch TV, and said ‘I want that one,’ explained Noble Hospital President George Koller, “but then I say, ‘I’m only going to pay you $2,000 for it — and you have to take it!’ If other businesses had to operate the way we do, they wouldn’t be in business.”
And it is that environment that is changing the world of hospital administration, said several hospital presidents who spoke with The Healthcare News.

In the days when hospitals operated in a cost-based system, when they were reimbursed for the full cost of the care provided — and then some — administrators could focus their energies on health care and how to provide it, said Koller.

Now, there is much more emphasis on reducing costs and finding ways to generate revenues, he said, acknowledging, again, that this is how most business owners spend their waking hours. “We would just like to be able to play by the same rules that they do,” he said.

The Healthcare News looks this month at how the changing landscape in the industry is altering day-to-day life for hospital officials. Administrators say many of the skills they now need, especially the ability to communicate with both internal and external audiences, are things that simply aren’t taught in business schools.

The Job at Hand
For example, Michael Daly, chairman of Baystate Health System, said he now spends much more time working with state and national elected leaders to make sure they understand the plight of hospitals today. That’s something that wasn’t part of the job description 20 or even 10 years ago — at least not to this extent.

And there are many other changes as well, he and others told The Healthcare News. For starters, administrators must take a much broader view of the health care picture, said Porten. Years ago, administrators of small hospitals could focus almost exclusively on what was happening at their facility, he said. Today, they have to pay attention to legislation in Washington and emerging trends in California, among other things.

Meanwhile, they must know and understand the rapidly changing world of technology, said Koller, referring to both medical advances and information technology. They must also be attuned to the wants and needs of the insurance industry as never before, he said.

Also, in today’s more competitive marketplace, administrators must be more focused on customer service, said Daly. While this is not necessarily a new phenomenon, it has taken on greater meaning in an environment where consumers have more choices than ever before — and they’re exercising them.

And then there are the physicians. Adminsitrators have always had to interface with the medical staff, said Daly, but today, doctors are facing a laundry list of issues that is making the Commonwealth a very unfriendly place in which to practice medicine. Keeping doctors happy — or as happy as possible given the circumstances — and finding replacements for those who decide to pack up and leave the state are becoming increasingly demanding parts of the job.

All this is turning hospital administrators who once were specialists into generalists, said Porten, men and women who must do more managing than their predecessors of a decade or two ago.

“I think there’s much more to this job than there was 20 or 30 years ago,” Porten explained. “There’s more planning involved, more federal regulations to keep track of, more technolgy — more of everything.”

Hospital administrators have more people helping them with this workload than ever before. Indeed, there are now positions in health care that didn’t exist years ago. Such posts include an IT specialist, a managed care coordinator (see related story, page 18), a governmental liaison, a corporate compliance expert, and a quality guru. And putting together such a team and picking the right individuals for each position is still another new challenge facing the modern hospital CEO, said Daly.

Dollars and Sense
But the biggest challenge for administrators is the bottom line — and making sure the number is written in black ink, not red.

And that is becoming increasingly difficult at a time when both public and private payers are not reimbursing hospitals for the full cost of providing care. There are new estimates that as many as three quarters of the state’s hospitals will lose money, said Koller, and the prognosis for real change in the way public payers, especially Medicaid, reimburse care providers isn’t good.

“This only puts more emphasis on keeping costs down and bringing in more volume,” said Koller. “If you don’t do that, you can’t survive in this environment.”

For hospital administrators, this new world order means taking a more business-oriented approach to decisions about new programs and equipment purchases, rather than a purely compassionate philosophy, said Porten.

“Today, you’re at risk for any decision you make,” he explained. “Under the old cost-based system, hospitals were not punished if a program wasn’t successful, but today, when your costs aren’t being covered by the insurance companies, everything you do needs to work or you pay a price.

“Other industries would say, ‘welcome to the real business world,’” he continued. “But those industries can pick and choose the markets they want to be in, and they can pick and choose the services they want to deliver. If they find that a certain market is deteriorating, they can change direction and produce new models of cars or airplanes — hospitals can’t in this state.”

Indeed, hospitals must have an emergency room, profitable or not, he said, and they must provide a number of core services, whether they turn a profit or not. “And we can’t pick up and move,” he said, “so we have to deal with the cards we’re dealt.”

And right now, that’s not a very good hand, said Koller, who told The Healthcare News that this phenomenon is propelling hospitals to find specific niches in which to generate revenue. Finding and developing such niches is now a much bigger part of the hospital administrator’s job, he said.

“You become very focused on patient volumes, because that’s where revenue is generated,” he said. “It’s all about controlling costs and increased total volume … that’s what drives you all day long.”

“When there was a different reimbursement model, the worry about covering the costs of someone’s care when they came to the hospital wasn’t there — the reimbusement was sufficient to cover the cost,” he continued. “Now, Medicaid, for example, pays 71 cents on the dollar, and next year it will go down to 67 cents. If you’re going to be paid those kinds of rates, you have to do whatever you can to drive volume, and you didn’t have to do that years ago.”

Healthy Dialogue
The battle of the budget has changed the hospital administrator’s job in other ways, said Koller, who told The Healthcare News that until five years ago, he had never been to Washington to press the flesh and advocate for the nation’s hospitals. Now, he goes every year.

That’s just one part of the broader educational component of the CEO’s job, said Daly, adding that, to be successful today, hospital administrators must be highly effective communicators.

Years ago, national trade groups carried the hospitals’ message to Wash- ington, said Daly, noting that today, individual administrators must do it. This includes junkets to D.C. and Boston, he said, but also bringing elected leaders into the emergency room so they can see that the problems there are real.

Beyond elected leaders, hospital leaders have to take the message to the public, said Daly, because, ultimately, it is the public that will sway officials in Boston and Washington to take decisive steps to help hospitals provide the high-quality care that people demand — and survive while doing so.

But communication is both internal and external, said Daly, adding that still another challenge facing modern CEOs is instilling core values in every department of the hospital.

“We drive our core values into everything we do here,” he said. “These are values that everyone in the organization has, or they don’t work here. And setting values and making them part of every facet of your operation isn’t something that’s taught in MBA programs.”

Leadership Roll
Porten told The Healthcare News that if there is one constant in hospital administration, it is change. The rapid pace of change in the past several years has made the job much different than it was a decade ago, and more changes are coming.

“It’s an exciting, dynamic profession,” he said, adding that those who want to succeed in it in the future must be generalists, people who understand different industries and different technologies — but they’re probably not going to be an expert at any of them.

What they will have to be an expert in is playing by rules that the rest of the business world wouldn’t understand. 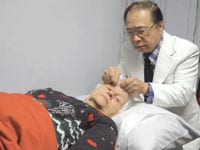 Grasping For The Light Brightside Continues To Change Lives