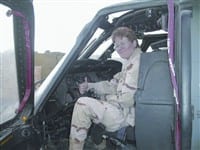 Diane Murphy says that when you’re one of a dozen or more individuals sharing a small tent in the middle of Afghanistan, you tend to work on your people skills.
“That next cot over is about three feet away,” she told The Healthcare News. “In that environment, you learn a lot about people and about working together as a team — because, essentially, you don’t really have a choice.”

Coping with adversity in such close quarters is just one of the lessons Murphy brought back from the front to her job as director of nursing in Mercy Medical Center’s Emergency Department. Mur-phy, who carries the title R.N. after her name in civilian life and the rank of major before it as a member of the U.S. Air Force Reserves, recently returned from 94 days of active duty in the war-torn Afghanistan region.

A member of the 439th Airlift Wing stationed at Westover Air Force Base in Chicopee, Murphy was stationed in a field hospital in what she could describe only as an “undisclosed forward location” for security reasons. She worked as part of a six-person team preparing aircraft and military personnel for evacuation to local military hospitals or medical facilities in Europe.

Her stint at the front came only a few months after she assumed her role in Mercy’s ER, and she returns to play a pivotal part in guiding the emergency department through a time of change and challenge. She said her time in Afghanistan — and her five-year stint with the Air Force Reserves in general — is helping her meet that civilian assignment.

“I’ve learned some valuable lessons about management and handling personnel,” she said of her work in the military, joking that one can learn as much from a three-month tour of duty as he or she can from a year in an MBA program.

Life in the Trenches
Murphy told The Healthcare News that there are many parallels between life on the front lines of the war against terrorism and the front lines of health care. For starters, there are lots of acronyms to keep track of. Also, there are chains of command in both places, as well as a basic mission to be met. The pace of action is very similar, she continued, although there is a “hurry-up-and-wait” aspect to life in both places. Meanwhile, people in both environs are taught to expect the unexpected.

But perhaps the most striking similarity is the need for effective teamwork, said Murphy, who noted that just as flight nurses, medical service care officers, and radio operators must work together in the field hospital, so too must the medical director, nurse manager, director of medical/surgical nursing, and clinical nurse specialists in today’s changing emergency room.

And Murphy has had a front-row seat for those changes in a 20-year nursing career — most all of it in the ER — that started at Baystate Medical Center and included a stop at Holyoke Hospital.

While life as an ER nurse has been quite fulfilling, Murphy has always desired other challenges and other ways to utilize her medical training and gain new skill sets. Several years ago, a fellow nurse at Baystate who was in the Air Force Reserves suggested that Murphy might want to join. She thought long and hard about the offer before deciding to sign on.

When she entered the reserves as a captain in 1997, she know she would be more than a weekend warrior, but she never expected to be in Afghanistan taking part in an all-out war against terrorism.

After Sept. 11, Murphy knew there was a strong possibility her unit would be called to duty, and that call came in February, only two months after she arrived at Mercy, only a few weeks before her employment benefits were due to kick in, and near the completion of a major renovation project in the ER.
“That made it a little more difficult,” she said of the timing of her unit’s callup. “I was just settling in at Mercy and getting to work on many of the initiatives in the ER when the call came. It was hard to leave.”

After just over a month of training and preparatory work at Westover, she was on her way to the Afghanistan region — exact destination unknown — at a time soon after U.S. forces had completed their laborious mission in the Tora Bora Mountains, a stage of Operation Enduring Freedom known as Operation Anaconda.
In Afghanistan, Murphy served as a medical liaison, working at the Army Contingency Support Hospital. Her role was to prepare the injured — both military and civilian — as well as the aircraft they would travel in, for transport to local military medical facilities or to military hospitals on bases in Europe. She flew with a patient on one mission, but most of her work was in flight preparation.

Working in an austere, mountainous region where temperatures often ap-proached 120 degrees during the day, she said her assignment was challenging, but also a valuable learning experience, with most of that learning in the area of management and strategic planning.

Emergency room nursing requires much critical thinking, she explained, especially at a time when census numbers are increasing and emergency departments become the entry portal for many people seeking medical care, especially the uninsured. And in the military, critical thinking is a way of life.

“You’re taught to think about the whole picture and not to overlook the smallest of details,” she said of her military experiences. “It’s the same way in the ER — what might be a small detail to you might be the answer to someone else’s puzzle.

“In recent years, there’s been much more teamwork among all participants in the ER,” she continued. “People have to work together and focus on that larger puzzle.”

In today’s ER, that puzzle increasingly involves keeping patients moving through a system that can easily become bogged down with people waiting for beds — in the ER and in the hospital itself.

“That’s what we’re spending a lot of time working on — keeping people moving and reducing put-through time,” she told The Healthcare News. “The emergency room is like a mini in-house unit, and what we want to do is make things run smoothly in that unit, from arrival to disposition.”

And for that mission, Murphy is calling on many of the skills she has honed through her years in the reserves. She said those experiences have done what she hoped they would do — broaden her skills and make her a more effective manager.

She said the Air Force is looking for at least an eight-year commitment from reservists, but, like many who join, Murphy expects to make it more of a career. “I’m in this for the long haul,” she said.

And when asked if the deployment to Afghanistan left her in any way safe from another call to the front — wherever it might be — Murphy said she didn’t expect another assignment, but that anything could happen.

In the reserves, as in the modern emergency department, one is always prepared for the unexpected. 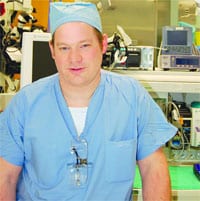 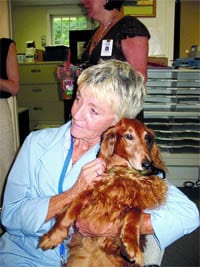