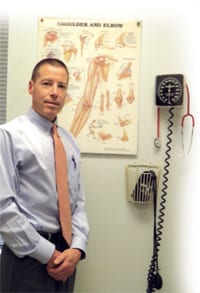 Young people have enjoyed sports for generations. But in recent years, the number of children on sports teams and the intensity of their play have increased dramatically.

Today, overuse injuries from repetitive stress are on the rise, in part because many youngsters in elementary school and beyond are devoting all their time and energy to one sport and playing it year round.

“Twenty years ago, children played three sports a year, but did so during different seasons. Each sport had its own challenge, but because children took a break from the same activity, the potential for injury was lower,” said Dr. Martin Luber, a physician in the sports medicine division of New England Orthopedic Surgeons in Springfield.

Dr. Darius Greenbacher agrees. “Overuse injuries are becoming much more prevalent, particularly in the pediatric and adolescent populations,” said the director of the sports medicine program at Baystate Franklin Medical Center. He explained that an athlete may run for fun during the summer, participate on a cross-country team in the fall, an indoor track team in the winter, and an outdoor team in the spring, but view them as three different sports, when, in fact, they all involve running, which can lead to overuse injuries, such as stress fractures of the lower leg and ankle.

In fact, the American Academy of Pediatrics says half of all sports-medicine injuries in children and teens today result from repetition or overuse. Young people are especially vulnerable because their bones are still growing, which makes them less resistant to stress; they are playing at higher levels than in the past; they are uneducated about symptoms related to overuse, and when something does hurt, they compensate by changing their movement patterns, which can lead to additional problems.

The academy recommends that young athletes take two to three months off each year from a specific sport to prevent overuse injuries and burnout, but many are reluctant to do so.

Since the incidence of these injuries is increasing, experts say parents need to become more educated and institute measures to keep their child safe. “Parents need to be the manager of their child’s development and also need to be thoughtful about the amount of time a child spends playing on more than one team,” Luber said, adding that coaches may be unaware of what a player is doing on other teams.

Greenbacher concurs. “It’s important to be realistic about expectations and your children’s desires and make sure you help them make safe and smart decisions and educate them so they understand how to keep themselves safe,” he said.

Part of the problem is that most people, especially children, don’t know how to determine if pain or discomfort is normal or if it requires a medical assessment.

“All kids who play sports will end up with bumps and bruises, and the majority are benign and self-limited,” Luber explained. “And most overuse problems respond favorably to rest. But if the child complains about the same body part for several days and doesn’t respond to rest, ice, or anti-inflammatory drugs, an evaluation is in order to ensure there is not a more serious problem.

“Adolescents who complain about discomfort that causes them to avoid sports or normal activities with their friends have gone beyond the point of a bump or bruise,” he continued. “An accurate diagnosis is the determining factor as to whether a child can play through an injury or whether doing so could cause permanent harm.”

Tom Dodge agrees. “Children love to play and don’t think anything of being sore or injured,” said the Springfield College professor of Athletic Training, adding that many are afraid they will be sidelined for a long period of time if they report pain, so they assure their parents they feel fine even when it appears they have a problem. “We see it even in college athletes. But a drop in performance is a big indicator that something is wrong.”

The situation is exacerbated when teens enter high school because competition becomes intense, especially if a child is a candidate for an athletic scholarship. Dodge said that, when he worked at the University of South Carolina, which had a strong baseball program, it was common to have freshman on athletic scholarships arrive with chronic elbow or shoulder problems severe enough to prevent them from playing or that returned after they were cleared for play. He has seen the same thing happen at Springfield College, and says overuse injuries are more prevalent in some sports than others.

These include volleyball (which can cause shoulder or ankle injuries), swimming, baseball, gymnastics, and soccer. In baseball, one type of injury is so common that the name ’Little League elbow’ has emerged.

“Most parents don’t have a full understanding of the depth of these injuries and what will happen if the child continues to practice,” Dodge said. “Plus, star players often feel that, even if no one else expects it, they need to keep playing to be a good teammate.”

Many athletes also mistakenly believe that a diagnosed injury will require them to stop playing for the rest of the season. “And in alpha-male-dominated sports, there is an expectation that you will play hurt,” Dodge said.

But sports-medicine doctors say they get athletes back in the game as soon as possible. “Getting someone back to play quickly is important because the body heals best when it’s moving; we don’t want someone to stop playing unless it is really necessary,” Greenbacher said, explaining that sports doctors bridge the gap between being injured and returning to a sport.

But in the case of overuse, returning to play must be done in a very supervised manner. “It’s essential for an athlete to dedicate as much focus and energy to recovering from an injury as he or she devotes to practicing and playing the sport. And even after a long period of time, the person is still vulnerable,” Greenbacher added.

For example, he said, an ankle sprain requires a short period of rest, followed by strengthening exercises to increase the range of motion. Next, the athlete must advance to leaping, bounding, and sprinting, along with making quick changes of direction, before returning to the sport.

“This type of injury requires specialized knowledge in rehabilitation,” he said. “It’s important to not only look at the injured area, but also at all of the other areas of the body and how the body moves.”

Experts say it’s natural for athletes to change the way they move to avoid pain, and they often do it unconsciously. But this can cause mechanical imbalances that make the problem more difficult to resolve. “When there are muscle and movement imbalances that were caused because the body was used in a way it was not meant to move, we often have to use physical therapy to retrain the person’s biomechanical patterns,” Greenbacher said.

Dodge noted that it’s important for parents to notice when a child begins to use their body in a different way than they have in the past, such as kicking a ball with a foot they don’t normally use.

“Young athletes will ignore a problem as long as they can find a way to play because they don’t understand what is happening and that they are causing more damage,” he told HCN. “They need to stop and be educated by a physician because, if a problem is not addressed, in time it can require surgical intervention. But players think they can work through pain, especially if their season is almost over.”

One condition that is common is overuse of the heel and elbow, which can lead to a degenerative condition called tendinopathy. Tendons are the tough fibers that connect muscle to bone and can become weak over time. Dodge said the condition causes pain without swelling.

“The athlete may feel weaker and not be able to run as fast or jump as high, but the more they use their muscles, the more stress it puts on the tendon,” he explained. “Overuse injuries are specific to an activity; runners have a lot of shin problems or hip imbalances, soccer players have foot and lower-body problems, and basketball players often get jumper’s knee, which is tendinopathy of the tendon attached to the front of the knee.”

In some instances, the pain an athlete reports is a symptom of an underlying problem. For example, runners often end up at a doctor’s office due to knee pain. “But their knees aren’t the main issue,” Greenbacher noted. “The problem is a weakness in their hip girdle. Weak hips can cause back pain and even shoulder pain. It’s one thing to deal with an injury and another to deal with the deeper cause. If you don’t do that and retrain the person’s movement patterns, the injury will come back.”

Greenbacher said every sport involves some level of discomfort, especially when a season begins.

“Injuries are part of sports, but athletes need to report them early and get supervised care. Unfortunately, there is definitely an attitude in sports of ’no pain, no gain,’” he told HCN. “But if the pain gets worse or is ongoing and causes someone to change their pattern of movement, it is important to seek medical help.”

Dodge said parents who are concerned about a possible injury should take note of when their child feels pain. For example, a cartilage tear in the shoulder, often referred to as a ’slap tear,’ is a common injury seen in swimmers and baseball, tennis, volleyball, and softball players, and will result in pain when the person brings their hand up over their head.

“It’s up to the parent to notice if a child is favoring a part of their body,” he said. “Kids don’t know the difference between being sore and being hurt. All they know is that they want to play. So parents need to encourage them to listen to their bodies and tell them they are taking them to see a doctor if something doesn’t seem or feel right.”

The ultimate goal of sports should be to keep a child physically fit and learn about teamwork. But young athletes should also be taught to pay attention to their bodies.

“Kids are very competitive and want to be successful,” Dodge said. “But constant repetition can result in injury, so parents need to pay attention and be supportive when a child needs to stop and take time off from a sport.”

If they do, it increases the likelihood that the child will be active for the rest of their life, which is a surefire prescription for ongoing health and success.

Smart Shopping – Eating Healthier Begins with the Trip to the Supermarket