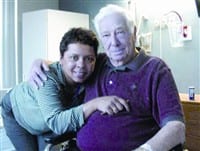 During his 46 years of practicing medicine, Dr. Norman Epstein delivered thousands of babies, performed hundreds of surgeries, and faced countless medical challenges. But nothing in his decades of experience prepared him for the personal challenge he faced this past February — a challenge that has led him to an appreciation for a field of medicine he knew nothing about.

At age 82, Epstein was living life exactly as he had planned. While wintering in sunny San Diego, the recently retired Springfield obstetrician-gynecologist would spend each day playing 18 holes of golf. He would then enjoy dinner with his wife, relax, and retire for the evening.

That was just what he had done on February 29. But on that particular night, a few hours after going to bed, Epstein awoke to find he could not move his right side.
“I knew I was having a stroke,” he said. “As a physician, I knew I was either hemorrhaging or infarcting, and that I could be dead in minutes. It was very scary.”

After five days in a California hospital, Epstein was flown by air ambulance to Massachusetts and admitted to HealthSouth Rehabilitation Hospital in Ludlow. “When I got here, I couldn’t even lift a finger. It took two people to transfer me from the wheelchair to the bed,” he said, adding that his speech was also initially impaired by the stroke.

But when Epstein arrived at HealthSouth, he had no idea of what was to come. “When I was admitted, I had never had any experience with rehab. I used to think it just involved treating sports injuries,” he said. “But I quickly came to a new appreciation for rehabilitation.”

During his stay at HealthSouth, Epstein engaged in daily physical, occupational, and speech therapy. “Every day I had three or more hours of therapy, and it was always with the same team of therapists,” he said. “My occupational therapist knew what I could do and shared that information with my physical therapist. The nurses, one of whom I delivered 28 years ago, also worked with me every day. The continuity of care, the intensity of the rehabilitation, and the collaboration among the team were all very important to my progress.”

ver the next five weeks, that progress included graduating from a wheelchair to a walker. “The team helped me to sit up, transfer, and eventually get around by walking. I also gradually regained most of the use of my right hand,” he said.

Epstein’s appreciation for rehabilitation was also enhanced by the emotional support he received from his treatment team. “Whenever I did something I couldn’t do before, everyone took great delight in my progress. I formed a strong attachment to my therapists. They became family to me.”

As he prepared for discharge from HealthSouth, Epstein also appreciated the role case management plays in the team treatment approach to rehabilitation.
“There is a case manager assigned to every patient,” he said. “She handled the insurance coverage and coordinated all the steps needed for me to go home including outpatient therapy, medications, and follow-up doctor appointments. All of that was a big help to my family and me.”

Home for Epstein and his wife will now be a retirement community in Longmeadow. And although selling his house and moving on will be an adjustment, he is ready for the challenge. “This whole experience has been a revelation to me,” he said. “I was so dependent on others, and they took an intense interest in me. Now I’m moving on to a new life.”

What’s in That Lunchbox? – Back to School Means Back to Good Nutrition Basics