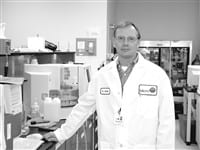 While the war against terrorism takes many forms, from military action to civilian warnings, one of the less visible roles is played by researchers who are racing to counter a range of possible weapons in terrorists’ arsenal.

That role is no less important than the others, however, said Steven Richter, president of MicroTest Laboratories (MTL) in Agawam, which finds itself working hand-in-hand with the U.S. government in some of that crucial research, specifically to counter the threat of botulism, a muscle-paralyzing disease most commonly associated with food contamination.

The company recently landed a $1.22 million contract to provide manufacturing support for the production of a series of recombinant vaccines against botulinium neurotoxins, a feared potential agent in the realm of bioterrorism. MicroTest has built a $500,000 room to fill vials with the toxin to the correct specifications, and do it without contaminating the materials. Those vials will then be used in phase 1 clinical trials.

“This gives the employees at MTL the chance to assist the U.S. government in its effort to protect our armed forces, health care workers, and the general population,” said Richter, adding that the project will help the company solidify its commitment to the pharmaceutical and biomedical industries.The contract was awarded to MicroTest through DynPort Vaccine Co. (DVC), a joint venture between DynCorp and Porton International Inc. DVC is a prime systems contractor to the U.S. Department of Defense under the Joint Vaccine Acquisition Program, responsible for developing, licensing, and stockpiling specific vaccines and other products to protect armed forces personnel against potential bioweapons agents.

“We are extremely pleased that DVC has chosen us to perform the aseptic processing of this important family of recombinant biologics,” Richter said. As The Healthcare News learned, this is no minor matter — both for soldiers fighting overseas and Americans at home.

The U.S. government and private researchers take this work seriously, considering that botulinium toxin is among the most efficiently produced bioweapons threats today.

According to the Johns Hopkins University Center for Civilian Bio-defense Strategies, botulinium toxin is the single most poisonous substance known — hence, the priority placed on developing defenses against its use.

The center notes that the toxin poses a major bioweapons threat not only for its extreme potency, but also because of its ease of production, transport, and misuse, as well as the potential need for prolonged intensive care in affected persons, which, on a large scale, could severely strain health care resources in an area.

A number of countries already identified by the U.S. State Department as “state sponsors of terrorism” have developed or are trying to develop botulinum toxin as a bioweapon. Aum Shinrikyo, the Japanese religious cult that killed 12 people in 1995 when it released sarin gas into the Tokyo subway system, has tried to incorporate botulism and anthrax into biological attacks, but never got hold of sufficiently virulent germs.

According to the Centers for Disease Control, there are three main ways in which botulism is manifested.

The most commonly recognized of these, foodborne botulism, is caused by the ingestion of a pre-formed toxin that leads to illness within anywhere from a few hours to a few days. Foodborne botulism is considered a public health emergency when it is recognized, as the contaminated food may still be available to others.

Beyond that, infant botulism occurs in a small number of infants each year who harbor Clostridium botulinum, the bacterium which causes botulism, in their intestinal tracts. A third type, wound botulism, occurs when wounds are infected with the same baterium.

In the case of foodborne botulism, which can occur in all age groups, symptoms most commonly arrive within 12 to 36 hours of ingestion, and may include double vision, blurred vision, drooping eyelids, slurred speech, difficulty swallowing, dry mouth, and muscle weakness that descends through the body, starting in the shoulder and extending through the upper arms, lower arms, thighs, calves, and beyond, Richter said. Paralysis of the muscles used to breathe can cause a victim to stop breathing and die, unless mechanical ventilation is provided in time.

Botulism, unlike other feared biological threats, such as smallpox, is not spread from one person to another. Also fortunately, no cases of waterborne botulism have ever been reported, likely due to the large amount of toxin needed and the fact that it is easily neutralized by common water treatment techniques.

However, with symptoms often not showing up until a week or more after ingestion, botulism gives terrorists an opportunity to infect a large swath of population before medical professionals are able to respond.

Natural cases of botulism are rare, typically resulting from food contamination. Many of types of food have been associated with outbreaks in the past, Johns Hopkins researchers said, the common factor being that the food was unheated or incompletely heated. Heating above 185 degrees Fahrenheit makes the toxin inactive. The largest outbreak in the United States in the past century occurred in 1977, when 59 people became ill from poorly preserved jalapeño peppers.

MicroTest, which has been developing testing methods for pharmaceuticals and medical devices for many years, hopes the DynPort project helps it move forward nto biologic manufacturing, especially in the arena of later-stage trials and commercialization.

The field is a potentially lucrative one, Richter said, but the manufacturing process is anything but simple.

“We have to analyze the raw material of the botulinium toxin coming in here, make sure they’re sterile and the protein levels are correctly formulated, then bottle them,” he said. “There are a lot of technical aspects to the project. It’s not just putting things in vials.”

He said clinical trials can take years, although vaccine work in the realm of bioterrorism has been fast-tracked, for obvious reasons.

In the meantime, given that the time lag from the period of incubation already works against defense efforts, government and medical officials are stressing the need to have effective vaccines at the ready in the military, health care, and civilian populations.

The CDC already maintains a supply of antitoxin against botulism, which is effective in reducing the severity of symptoms if administered early in the course of the disease. The vaccines being developed and produced through the joint effort between DynPort Vaccine Company and MicroTest Laboratories adds up to a more advanced and, hopefully, more effective weapon against botulism.

MicroTest, which has operated in Agawam for 20 years, has developed technology to support a broad range of pharmaceutical and biotechnology companies in the areas of testing and manufacturing, said Richter, the ex-Food and Drug Administration microbiologist who founded the company.

“This contract will allow us to continue to expand our capabilities in the areas of biopharmaceutical and pharmaceutical manufacturing and support services, not only in the aseptic fill arena but in product and process development as well,” Richter said.

According to Johns Hopkins, a deliberate aerosol or food-borne release of botulinum toxin could be detected in several ways, such as a large number of acute cases presenting all at once, cases involving an uncommon toxin type, patients with a common geographic factor but without a common dietary exposure, or multiple simultaneous outbreaks without a common source. Victims of botulism may initially present with gastrointestinal distress, nausea, and vomiting before neurological symptoms kick in.

Ideal therapy for botulism depends on early suspicion of the disease and prompt administration of antitoxin, along with supportive care, which may include mechanical ventilators, parenteral nutrition, and treatment of secondary infections.

For MicroTest Laboratories, however, treatment starts now — by aiding in the manufacturing and testing of newly developed vaccines. In the process, the company is making some strides of its own.

“We’ve been growing, but this helps us make a large leap into biologics, which allows us to expand not only our vaccine work, but other areas,” Richter said. “There will be many clients who come to MicroTest producing drug products that need to be purified and bottled and done aseptically without contamination. Right now, it looks like we’ll have a nice, steady stream of growth.”

In a world that the threat of terrorism has made a little more anxious, this Agawam firm is playing a large part in countering those fears.