Mercy Medical Center has partnered with a group of pathologists in an intriguing new venture that blends large doses of challenge and risk — and opportunity — for the parties involved.
The initiative, known as Life Path Partners, LLC, constitutes a unique arrangement in that Mercy and a group known as New England Pathology Associates (NEPA) are 50-50 partners in ownership of the venture’s two laboratories.

The arrangement provides new resources and opportunities for physicians affiliated with Mercy. Indeed, the six physicians, five of whom most recently worked for Baystate Medical Center, offer a wide range of sub-specialty pathology services, including cytopathology, gynecologic pathology, renal pathology, transfusion medicine, and many others. Those physicians, meanwhile, gain a needed measure of control and flexibility not available in the traditional pathology model, in which the hospital owns the lab and the physicians provide services to the physicians utilizing it.

“What this arrangement allows us to become is nimble,” said NEPA President Gerald Nash, MD, who added that this is a necessary quality at a time of heightened competition in the field.

To make the arrangement work, however, the physicians must be, as Bruce Dziura, a member of NEPA, describes it, “entrepreneurial.”

Indeed, Mercy is a comparatively small hospital, and inpatient pathology work has been declining for the past several years as the focus in health care has shifted largely to outpatient work, said Dziura. Thus, to realize the volume needed to sustain six physicians profitably, NEPA must aggressively target outpatient work at physicians’ offices from Enfield to Greenfield.

He attributes this to the wealth of experience the NEPA physicians bring to the table, as well as the breadth and depth of the sub-specialties they cover.

The Healthcare News looks this month at how this partnership came together and how the unique model brings benefits for the medical center, NEPA, physicians — and especially the community.

Nash said he and other physicians in the NEPA began talking with Mercy about forming a partnership nearly a year ago. The medical center wanted to expand its pathology services beyond what its group of three physicians could provide, he explained, and the doctors who would eventually comprise the group were looking for a more flexible, more entrepreneurial arrangement than what they had at Baystate.

Thus, the model that developed made sense for both parties. “Mercy has been growing,” said Dziura. “With that growth comes a need for broader, more sophisticated lab resources. So for them, this was a natural move.”

For the physicians involved, it was a logical, if also somewhat risky, proposition.

Nash, who came to Baystate in the early ’80s, successfully built that facility’s Pathology Department from a six-physician group to one with more than 20 doctors covering a wide range of sub-specialties. The vision that Nash and Dziura developed was of a similar pathology service, one that would serve a broader range of physicians and patients.

For that vision to become reality, however, the pathology group would need a measure of control, or ownership, over the operation of the laboratory facilities. The deal that was worked out calls for joint ownership of Life Path Partners’ two labs — Mercy Medical Center’s Life Laboratories and a separate office at 222 Carew St. in Springfield.

With joint ownership comes opportunity, said Nash, as well as a hedge against falling reimbursement rates for pathology services, a phenomenon that has affected pathologists across the state.

Co-ownership also puts the medical center and the physicians within NEPA on the same page in terms of business goals and how to reach them, he said. “This aligns everyone,” he explained, “in the effort to create a quality, but also cost-effective, operation.”

Joint ownership also means sharing the risks. In this case, that means creating the volume of work necessary to sustain six physicians. To meet the goals in its business plan, NEPA must be entrepreneurial, stressed Dziura, which means aggressively pursuing work generated in physician’s offices in the Pioneer Valley and beyond.

And competition for that work is growing, said Nash, who told The Healthcare News that with a finite amount of inpatient work, both independent and hospital-connected labs are knocking on the same physicians’ doors as NEPA.

What will help the group is the experience of the team members and the range of sub-specialties they cover.

This range of services makes the group very attractive to physicians at Mercy, said Vincent McCorkle, president and CEO of the medical center. He told The Healthcare News that the partnership, similar to one that exists between Mercy and the physicians at Riverbend Medical Group, is another example of how Mercy is working to create value for the community by blending quality care with low-cost delivery.

Mercy partnered with the Riverbend group’s physicians to buy the centers (formerly known as Medical West) from MedPartners Inc., of Birmingham, Ala., which acquired them from Blue Cross-Blue Shield of Massachusetts in 1997. That arrangement provides an environment where physicians can direct patient care — instead of a single HMO that might own the facilities — he said, and the partnership with NEPA works in a similar way.

“When we put together our strategic plan, we concluded that what was needed was more physician-directed care,” McCorkle said. “What we’ve tried to do is create an environment that nurtures the relationship between the physician and the patient, and the partnership with NEPA is the latest example of that.”

The partnership between Mercy and NEPA is believed to be the first such arrangement with a pathology group in this area, and maybe the first in the state. But if the model proves successful — and it’s off to a solid start — it could be tried elsewhere because of the inherent benefits it brings for the various parties involved, said Dziura, who credits Mercy with having the requisite vision and imagination to create such a partnership.

“Their willingness to enter into this kind of partnership shows a great deal of foresight,” he said. “They looked at where health care was heading and took a step that should help the hospital and, more importantly, the community.” 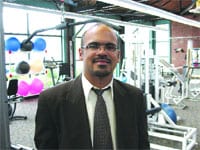 Down Time Dr. Julio Martinez-Silvestrini Builds on His Dream of a Sports Clinic