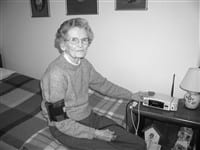 As resources are spread increasingly thin in many areas of health care, particularly elder care, computer technology is making it possible for many home care patients to receive attention when it’s needed, even if a nurse’s visit is not scheduled.
Using a state grant to purchase the equipment, Spectrum Home Health Care in Longmeadow has begun using a system known as telemedicine to assist with the care of 25 of its 90 home care clients. Each of those patients, chosen because of chronic conditions that require the most attention, uses a home monitoring unit to deliver daily evaluations of their condition to a central monitoring unit at Spectrum, which then lets managers know who needs immediate care.

“We might see them two or three times a week, while the monitor operates seven days a week,” said Elise Ungar, Spectrum’s executive vice president, who stressed that the system does not replace home care already delivered in person, but merely supplements it. In doing so, telemedicine actually keeps some patients out of acute-care settings.

“We have an aging population, and people are getting older and have a lot of chronic diseases, like congestive heart failure,” she told The Healthcare News. “By being able to monitor them daily, we can detect any exacerbation of the illness and intervene sooner. Nurses can make decisions immediately on whether a patient needs a visit or needs to see a doctor, and that early intervention could keep them out of the emergency room.”

Such a benefit arises from a simple idea married with cutting-edge technology. At a certain time each day, the home monitoring unit signals patients to record, through simple tests, their vital signs, which are then relayed via a telephone line to the central monitoring station.

The testing equipment itself is simple, featuring tools such as a digital scale for weight, a blood pressure cuff, a digital thermometer to record temperature, and a finger probe to measure heart rate and oxygen saturation. The patient interface, which features a screen and voice prompts in one of several languages, requires just a few button presses and less than three minutes to complete.

“Obviously, one of the benefits of the system is that patients get better quality care. It’s a new standard of care, if you will,” Ungar said. That’s because information that could before only be gathered on a personal visit is maintained continually throughout the week — and that could make a big difference in many cases.

For instance, one nurse came in on a Sunday morning to find that a patient with congestive heart failure had gained five pounds, a common effect of fluid retention in the lungs. The patient was treated in the home right way for a condition that, had he not received help until Monday, could have landed him in the hospital. “What this does is allows us to intervene before it gets to be too late,” Ungar said.

Spectrum started incorporating the system last summer and launched it in January. “We had basically gone around and looked at all kinds of equipment out there before settling on this system,” she said. “We were able to show a lot of success in the first quarter alone. A lot of patients avoided returning to the hospital.”

When a patient is hooked up with telemedicine, a nurse first explains how to use the three-pound monitor, which looks a little like a clock radio. Once set up, the system uses a timer and voice prompt to remind the client when it is time to take the readings. A nurse reads the information at the central monitoring station every day between 8 and 10 a.m. to check on how patients are doing and make any decisions on additional care.

“It’s a user-friendly piece of equipment. It’s very easy, and clients really like it,” Ungar said.

A Question of Resources

Right now, Spectrum uses telemedicine primarily for patients with congestive heart failure, cardiovascular conditions, and diabetes. Elderly patients with multiple problems, such as a hip fracture and a history of high blood pressure, might also be good candidates. But Ungar said she’s seen the system make a difference, and she doesn’t want to stop with the current 25 monitors: “I’d love to see us next year have another 25.”

Meanwhile, the program could begin to catch on in Western Mass., where it does not yet have much of a foothold. “In the Midwest, particularly in rural areas where patients are not as close to agencies or hospitals, they’re being monitored all the time,” she noted. “Some private insurances are actually reimbursing this, but it’s fairly new for Western Mass.”

Telemedicine does more than connect people who live far away from their care providers, however, Ungar said. To her, technology like this allows nurses’ time and resources to be more wisely spent across the entire agency.

Specifically, those patients who require only evaluation — and not treatment — on a certain visit could free up nurses for other patients. Meanwhile, more acute care can be easily directed to those who need it. “We are in the midst of a nursing shortage, and we have to be really careful to make sure we use resources more efficiently,” she explained. “If we are able to perhaps reduce visits for one particular client, we’ll be able to serve another client. That sounds like a win-win situation for everyone, so it’s really exciting.”

And, even in Western Mass., there have been some steps toward telemedicine as a widespread practice in home care. For example, Blue Cross/Blue Shield backs monitors for their congestive heart failure patients in this region, so movement is evident toward greater acceptance of telemedicine. “It sounds like it’s on-the-edge stuff, but it’s really happening now,” Ungar said.

For patients with chronic illnesses that could turn deadly at any given moment — but who value the independence of the home care setting — the issue is clear: technology has uncovered a way to turn their telephone lines into lifelines.

Healthy Messages You Need to Effectively Market Your Medical Practice