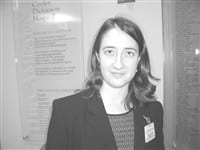 Sonia Bouvier can rattle off stories about the choices people make between health and money.

Too many times, she said, they choose money — because there’s already not enough of it to pay the bills.

“I had a client come in with diagnosed breast cancer in remission,” said Bouvier, director of Hampshire HealthConnect, a program that helps uninsured patients pay for health care. “She said, ‘I was supposed to get follow-up for it, but I have too many bills’ — and she had not gone back.”

Stories like this — of people needing health care but are unable to afford it — are all too common in America today, which is why the Access Project, a resource center affiliated with Brandeis University, conducted an 18-state study of the problem.

Its report — titled Paying for Health Care When You’re Uninsured: How Much Support Does the Safety Net Offer? — was released nationally in January, and it spotlighted Hampshire HealthConnect, which is affiliated with Cooley Dickinson Hospital in Northampton, as an example of how private institutions can tackle theneeds of area residents while state and national legislators grapple with health care access issues on a broader scale.

As Bouvier said during a press conference announcing the report’s findings, many people aren’t aware of the options available to them — while for others, adequate options don’t even exist, and the choice between staying healthy and paying other bills becomes more wrenching.

“Our findings challenge the myth that Americans without health insurance receive free care,” he said. “We heard of people too ashamed to return for follow-up visits because they had no money, and of families hounded for payment, handed over to collection agencies, and forced to declare bankruptcy. Too often, they trade medical problems for financial problems.”

With states contemplating further Medicaid cuts, the problem only promises to get worse, Rukavina said. And in Massachusetts, area health professionals worry, even the free care funding provided by the state has become woefully inadequate, causing stress not only for patients but for providers who are already being undercompensated by third-party payers.

• However, staff offers of assistance made a difference. The more often staff offered to find out about available financial assistance, the less likely it was that respondents to the survey found themselves in debt to the facility.

That’s where a program like Hampshire HealthConnect comes in — and that survey finding is one reason why the Access Project chose to highlight Northampton’s service.

The idea, Bouvier said, is to help uninsured and underinsured patients find ways to cover their medical costs — and therefore keep them coming back for needed treatment and not worsening in their conditions.

The program began with a grant from the Blue Cross Blue Shield Foundation, along with additional funding from Cooley Dickinson itself. The program staff screens each applicant to determine what kind of help is available, whether from MassHealth or some other source.

Sometimes, there’s not much the program can do when it comes to medical services. But Bouvier said that most people don’t realize they qualify for a prescription discount through Citizens Health, as long as they can pay an annual $12 fee. Because the state’s free care doesn’t cover prescription drugs, that’s a good service to know about, she said, because just staying on the correct medications is one way to stay out of the emergency room — and away from further costly treatment.

“We haven’t kept track of how many people don’t know about available coverage,” she said. “But I’m almost always able to link a patient up with a service they’re eligible for but didn’t know existed.”

Bouvier said there are days when she can’t return all the calls she gets, which is one reason why the hospital is looking to expand the program and hire another full-time staffer. The problem isn’t going away, she insisted: right now, between 4,000 and 6,000 people in Hampshire County alone are uninsured, and further Medicare cuts threaten to add another 1,000 to that list.

However, Dan Hawkins, vice president for federal, state, and public affairs for the National Association of Community Health Centers, stressed that individual community programs cannot be the entire answer, no matter how well they work on a local level.

With private insurers demanding deep discounts and the savings providers once used for free care drying up, the entire medical system is failing on every level, he said, calling on lawmakers to reverse the trends.

“I’ll stand behind any reasonable effort to provide coverage to families who are uninsured or soon will be,” Hawkins said. “I’m somewhat hopeful about change on Capitol Hill; both Democrats and Republicans are saying they understand that we have to address the problems of the uninsured.

“I think there’s a real opportunity to do something here,” he continued. “The longer the session goes on, the more horrible stories will emerge, and they won’t be able to ignore it.”

For her part, Bouvier is gratified by the impact HealthConnect has made. The woman she mentioned who wasn’t receiving follow-up breast cancer treatment was able to access Medicaid funds.

“It was a huge relief for her and her family. But it would have been much better for her if she had been able to access this earlier,” Bouvier said.

“It’s not a cure-all,” she stressed. “If someone is not eligible, there’s often little we can do unless the provider agrees to see the patient at a reduced cost. But for the most part, it’s truly a win-win for the hospital and our patients. The bills are more likely to be paid, which keeps the hospital more financially viable, and the patient is more likely to get the care they need, which might keep them from becoming more seriously ill.”

If anything is seriously ill right now, Bouvier and the Access Project organizers claim, it’s the entire health care system. And they keep pushing for solutions that, for now, still seem far away.