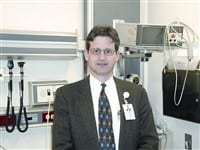 Dr. Neil Seymour understands the struggles medical professionals face in Massachusetts, from stingy Medicaid reimbursement rates to soaring malpractice costs.
Still, Baystate Medical Center’s new vice chair of Surgery considers the hospital — and the Greater Springfield region itself — a good fit, which is why he left Yale-New Haven Hospital in Connecticut for the opportunity to work in the Pioneer Valley.

“Coming from the university world, I saw a very forward-looking institution with a genuine interest in expanding its own programs, investing in new technologies, and developing general surgery precisely in the areas I’m interested in,” Seymour told The Healthcare News during his second week is needed, making it a safer procedure.

That’s one more reason why Mick hopes the technique catches on quickly. About 24,000 procedures have been performed nationwide — only seven at Cooley Dickinson so far — and progress in making the technique more commonplace has much to do with its cost, which is greater than vertebroplasty.

However, “the increased cost of performing kyphoplasty is justified by the improved results,” he argued. “With every new procedure, we need to compare those factors to the cost. We’d like to be able to prove that the results are worth that added expense.” The relative safety of the procedure, as much as its effectiveness, should be considered in making that assessment, he said.

The implications of any improvement in treatment are significant, he stressed. About 25 million American women suffer from osteoporosis, as well as 5 million men. Of those, some 1.5 million are stricken with an osteoporotic fracture each year; in fact, by age 90, one in every two women — and one in six men — will sustain some type of fracture related to the condition.

Mick did concede that there might be some circumstances in which kyphoplasty isn’t the best option, explaining that restoring normal alignment over the long term is a more important consideration in a 30-year-old, or even a 60-year-old, than a patient pushing 90.

Meanwhile, the benefits of developing new treatments such as kyphoplasty goes even beyond osteoporosis, Mick said. Cancer patients who develop tumors often end up with collapsed bones, for example.

“It may be possible to use kyphoplasty in the future to reduce these other fractures,” he said. “Instead of doing open surgeries on the knee or the wrist, we may be able to use the same balloons and do these injections instead of open surgeries.”

And as the cement — its medical name is polymethylmethacrylate, or PMMA — becomes more commonplace, research-ers are already developing an actual bone-based substance that can harden and serve as a more natural substitute. Continued advances could reap benefits across many types of injuries, Mick asserted.
Staying Vigilant

Despite the impressiveness of new techniques, Mick emphasized, the most effective weapon against the effects of osteoporosis remains decidedly low-tech — and that is simply a regimen of prevention and screening.

“We’re treating fractures at one end, but at the other, we’re trying to put ourselves out of business by identifying them early on and preventing them,” he said.
According to the National Osteoporo-sis Foundation, a hip fracture carries a 10{06cf2b9696b159f874511d23dbc893eb1ac83014175ed30550cfff22781411e5} to 20{06cf2b9696b159f874511d23dbc893eb1ac83014175ed30550cfff22781411e5} mortality rate over the course of a year, and other types of fractures can also pose serious threats. All post-menopausal women are at greater risk of osteoporosis, but other risk factors — such as smoking, chronic steroid use, diabetes, thyroid disease, family history, or previous fractures — should raise warning flags that screenings should start well before the senior years.

“If you’re at risk, you should be targeted for osteoporosis and started on medication before the first fracture or immediately after to prevent a second or third,” Mick said.

“We commonly see someone who falls or has a risk factor and is not started in medication for osteoporosis, and they come back five years later with some fracture that could have been prevented. That message has still not been taken up by the medical community. We need to be more aggressive at identifying that first fracture and getting more people on medications.”

Of course, despite his hope, surgeons who treat fractures won’t be going out of business for lack of it anytime soon. And for those who struggle with spinal fractures, recovery and pain management are getting easier all the time.

That cement-like material may harden like stone — but the stone age in fracture treatment is rapidly becoming a thing of the past.