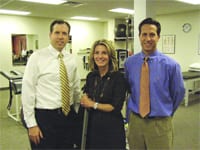 MaryLynn Jacobs recalled the moment — a series of moments, actually — a decade ago, when she, Terry Ditmar, and James Biron realized they had what it took to launch their own physical therapy and rehabilitation practice.

What they brought to the table individually, Ditmar said, was as important as what they shared.

“We had worked together at a few different facilities, and we realized we all had very similar philosophies and passion for the profession,” he noted, “and that’s why we decided to start our own business.”

That was in 2001, and the business they called Performance Rehabilitation — operating out of a small space in West Springfield — began to gain momentum, mainly through word of mouth.

The practice offers rehab services for patients of all ages who have been injured at work, home, or during recreational activity, or who are going through or recovering from a disease. At first, Ditmar, Jacobs, and Biron treated all clients themselves.

“We based our referrals on the reputation we had built and the quality of care we provided,” Ditmar explained, “and from those attributes, we were able to expand to the next practice.” That was a hand-therapy practice in Springfield, which was followed by a third site a few years later in East Longmeadow.

At that point, Performance was clearly a growing company, and for the first time found itself actively marketing through more than person-to-person referrals. “About that time, we also really started interacting more with primary-care physicians,” Ditmar told HCN, building a referral web that is critical to its success today.

Performance expanded again in 2009, adding a location in Wilbraham, and followed that with a fifth site in Belchertown earlier this year. While all five locations are in the Greater Springfield area, Ditmar said it’s important to bring services where clients are, especially when dealing with older individuals or those with mobility issues.

“We’re responding to patients’ needs,” he said. “As the patient population ages, it’s harder for them to come into Springfield; that was why East Longmeadow was added, and why we moved to Wilbraham.” And even for those able to travel out of town, he added, the convenience of a nearer option is beneficial for patients who must make a large number of visits in a short time.

“It’s also where the therapists work,” Jacobs said of the suburban locations, using East Longmeadow — where the three principals spoke with HCN — as an example. “Ninety percent of the clinicians here live within this community or very close by. So we’re very community-focused here, I’d say, and that goes along with our mission.”

The company is also intent on staying ahead of the health care curve and adapting to whatever changes are occurring, Biron said — a goal that drove the creation of one of Performance Rehab’s more innovative offerings, known as Attain Performance. Essentially, the program bridges the gap between acute rehabilitation sessions and the client’s everyday life — whatever that might entail — particularly after insurance stops paying for intensive physical therapy.

“The programs in Attain help people get from the more acute phase into more day-to-day activities in a cost-effective way,” he explained. “It’s a way to keep people in the rehab environment and get them back to where they need to be, whether it’s getting back to sports, back to work, or just getting around.”

With programs developed by physical and occupational therapists and strength and conditioning specialists, Attain meets a need that health clubs typically cannot, Ditmar explained, while serving as a bridge to that kind of regimen.

He cited a recent New York Times article discussing how many people who get into fitness programs suffer from knee pain, back pain, or other issues that those facilities aren’t equipped to specifically address. “Here, it’s still rehabilitation-based, but it can morph into a strength and conditioning program.”

As health care costs continue to soar, Biron said, the need for such a bridge will become even more, well, acute.

“The way the health care market is moving, there’s going to be a compressed number of visits, and a cap on what insurance companies want to cover for rehab,” he said. “As we’re looking ahead in health care to larger deductibles, higher co-pays, and more out-of-pocket expenses, we’re looking to give people high-quality services in a cost-effective way, to get them from acute rehabilitation into longer-term functioning.”

Jacobs emphasized that Attain brings peace of mind to patients — she cited the example of joint-replacement surgery — who know their insurance will pay for only a certain number of acute rehab sessions.

“Seniors love it when they’re coming from a knee replacement or a total hip replacement, because they know they’re going to be watched closely by trainers,” she said. “It’s a great program; a lot of places across the country don’t do things like this.”

As the business has grown, Ditmar said, the three owners have remained active on the treatment side, but have also focused on finding young therapists and training them to provide care. “We’re all actively involved, and we all see patients, just not as much as we used to,” he said. “We’re heavily involved in teaching and education to help the staff grow.”

To build the most effective staff, they promote a family-oriented culture and look for therapists who buy into the company’s focus on education and teamwork.

“Because we’re therapists ourselves, we try to run the business like we would like to be treated,” Ditmar said. “We’ve found that, if we hire people with the sort of passion we have for the business, it really minimizes the problems you can run into.”

Added Biron, “we’re clinically focused, and if we can attract employees that are like-minded, that drives success of the company.”

Performance Rehab has a referral base of about 400 doctors and other providers that it has cultivated over the past decade. Early on, Ditmar said, “we saw the need to develop these relationships with primary-care physicians and specialists.”

But as business has grown, they have also built relationships with area colleges that boast programs in physical and occupational therapy, to ensure a steady flow of talent at the five (so far) locations.

“Some students don’t want to stay in Western Mass.,” Jacobs said, “but we’re very involved in the local schools.” The company also runs internships of four, eight, and 12 weeks to introduce potential employees to the practice.

Because there’s no shortage of patients with back, shoulder, and neck injuries, or carpal tunnel, balance and inner-ear disorders, and any host of other conditions requiring rehabilitation, Ditmar, Jacobs, and Biron aren’t afraid to continue building a rapidly growing brand in the Pioneer Valley.

“Reinvestment in the company is important to us,” Ditmar said. After all, looking to the future is the goal of everyone who steps, however gingerly, through the front door.