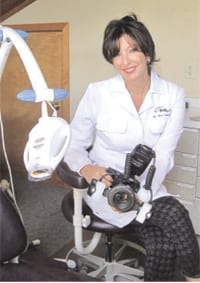 When Katherine Dzulinsky saw recent pictures of herself with some friends, the experience didn’t leave her smiling. Her teeth were not as bright or white as they had been or as she wanted — and she knew precisely why.

“There is a coffee craze now, and I like coffee, and an occasional glass of red wine … and I could see my teeth weren’t as bright as they had been for my wedding several years ago,” said Dzulinsky, a Florence resident.

So she decided to turn to an option she’d used successfully before — teeth whitening, a process of using a solution known as carbamide peroxide (a longer-shelf-life derivative of the bleaching agent hydrogen peroxide, both of which have been deemed safe by the FDA) in a mouth-fitting plastic tray or applied directly on the tooth with light treatment. And as she did so, she was confronted with a host of options — dozens, in fact.

They included everything from online, at-home kits to a myriad of competing bleaching products that come in strip, syringe, and tube-gel form from the local drugstore, to the professional options available at her dentist’s office. This makes her story typical and topical, as more people turn to teeth whitening to address an age-old problem, and face some intriguing decisions about how to go about it.

Dzulinsky ultimately chose the professional route, and it was in the East Longmeadow office of her dentist, Dr. Lisa Emirzian of Emirzian, Mariano & Associates (which also has an office in Northampton), that HCN caught up with her, literally as she just finished her first whitening treatment in six years.

And at that moment she was smiling, because her teeth were certainly whiter and brighter, as evidenced by the ’before’ photographs on the monitor behind her.

“We take a lot of pictures [before and after] around here,” noted Emirzian. “We want our patients to smile; it can be a life-changing experience.”

While it may seem exaggerated to use the term ’life-changing,’ having a good smile is an important quality on many levels — everything from self-esteem to that all-important first impression, be it on a date, a job interview, or myriad other scenarios where appearance is a factor.

“Absolutely,” he told HCN. “There is a direct, one-to-one correlation between quality of living, your financial success, and, believe it or not, your height, your weight, your smile, your ability to carry yourself, your physical characteristics … being attractive is certainly a huge job advantage.”

This widely held opinion is one of the reasons why teeth whitening is becoming increasingly popular. But others include that aforementioned variety of options, which has in many ways brought down the cost of the process and made it available to more people.

’Buyer beware’ is a phrase that resonates for Dzulinsky, who told HCN that, even though she reads a good bit in lieu of television viewing, she was quite aware of all the teeth-whitening options though other forms of media. But her decision to seek professional guidance came easily. If she had questions, discomfort, pain, or anything that required professional advice, she’d rather look to someone she trusted.

A veterinarian by trade, Dzulinsky wasn’t leaving anything to chance. “That’s why I’m here,” she said in Emirzian’s front office. “If I have questions, I’m not left staring at a box” from an online kit.

Emirzian said the dentist’s chair is the wisest choice when dealing with a product and service that has seen an uptick in popularity, particularly in the past several years, which has resulted in a slew of over-the-counter and mail-order products, some offered by people with little, if any, dental background.

“The Internet exposure for teeth whitening has been huge in just the last couple of years, and that has led to the increase in requests, but there are concerns that I have regarding people buying online,” said Emirzian, who practices with her husband and business partner, Dr. Vincent Mariano. She told HCN that her concerns are not just from a business perspective; they are fundamentally about oral health and reaching the goal of healthy, evenly whiter teeth.

“The number-one negative of buying online or over the counter is that there is no dental exam by a dentist,” she explained. “First of all, whitening will not affect pre-existing fillings, bonding, and veneers, and if any of those teeth are in a highly visible zone, then the whitening would do nothing for them, because the process only works on natural teeth.”

Failure to fully understand these limitations can lead to a checkered appearance between darker and lighter teeth or areas of a single tooth, and this is one big reason why both Emirzian and Magiera recommend that whitening processes happen before any reconstructive efforts.

“I always make sure that that I present that whitening option to my patients at the start of any veneer or bonding work, because, once I match that new veneer to the existing teeth, that’s the color they’re going to have forever,” said Magiera.

Emirzian added that this type of important information is not readily available when purchasing online, but there are two other important considerations: the health and sensitivity of the teeth and gums, and the customization of the bleaching trays, which in the on-line kits arrive as boxy, uncomfortable, one-size-fits-all plastic trays.

“If you don’t have a custom tray that fits well, you can burn the gums or cause further damage to receding gums,” explained Emerizan, who then showed HCN a clear plastic tray that had a perfect mold of a patient’s teeth and the scalloped edges that followed the curved enamel of each tooth.

“The custom-made trays allow the patient to keep the gel on the teeth, not the gums, and that’s the key, control,” she said.

Magiera told HCN that the process for teeth whitening, as a professional in-office procedure, is the fastest way to whiten teeth and have full control over the outcome. While total procedure time may vary, patients can expect to spend around 40 to 90 minutes at the dentist’s office from start to finish, as compared to take-home or mail-order options that may take anywhere from five days to three weeks.

Meanwhile, Alex Dastmalchi, CEO of Vitagoods, an online health care, beauty and lifestyle-products company in Newport Beach, Calif., has seen the trend from a different side of the business. He said he saw the spike in teeth-whitening popularity about two and a half to three years ago — pretty much the same timeframe as Emirzian and Magiera — when the Internet sites offered teeth-whitening products and people bought them, which created even more competition in a suddenly booming industry.

“It wasn’t just the value, but the convenience — no appointments were necessary or need to go to the dentist’s office, and it made a lot of sense to people to buy online instead of paying more money at a dentist’s office,” Dastmalchi said, adding that he feels dentists aren’t thrilled with the online products because of the potential lost revenue.

Both Magiera and Emirzian price the process in that same $300-$475 range, lower than the $500-$800 of years ago, but Magiera says that, if consumers perform due diligence and all the required math, they’ll find the cost of teeth whitening in a dentist’s office isn’t much (or any) more than that of online or over-the-counter products.

“Those kits in the drugstore are $40 to $80 a week, or online are under-$100 kits,” he noted. “And after the however-many weeks you need to get your teeth to where you want them, it can be pretty much the same cost as what I offer, with my professional attention.”

But professional attention isn’t the major objective of the online companies — sales are. And there is a reasonable difference between prices, percentages of carbamide peroxide, the active ingredient, and, in some cases, the ethics of the seller.

“The Internet is the future of commerce,” said Dastmalchi, who markets his lifestyle products via his Web site and the online discount-sales site Groupon. He offers the Premium Home Whitening teeth-whitening kit for $29, which, according to Groupon, is a $158 value. Out of the almost half-million units sold, half of those have been through several campaigns on Groupon alone.

“We get repeat business; people come back for refills and purchase other products that we offer on our site (sonic tooth brushes, blood pressure monitors, etc.), and the exposure for our Web site is just great,” he said.

“It’s like anything else — buyer beware,” he continued. “It’s the reason we’ve been able to sustain our relationship with Groupon; we’ve sold over a quarter of a million units, and we haven’t had one bad review. We don’t make any false claims; we sustained ourselves due to pricing, a quality product, and great customer service.”

Magiera considers his entire practice and all the medical and esthetic services that he offers when he discusses teeth-whitening and what it means for business and his patients’ health and well-being.

“No dentist is going to make money off this process,” he explained. “However, it does make my patients more aware of their dental health; once their teeth are where they want them to be, and then they really start taking care of their teeth, coming in for their exams, that’s the really rewarding part for me.”

And though a gratifying experience, whether it’s a process via the Internet, the drugstore, or a professional office, the teeth-whitening process appears to be here to stay.

“I see this product continuing to grow and becoming mainstream,” said Magiera. “Like brushing your teeth or hair, it’s a part of the lifestyle.”

“It is a lifestyle now, but I really don’t even segregate it out — it’s part of what we offer overall to our patients,” she said, adding that she’s gone so far as to offer the process to a patient who has had extensive work done. “I see the process as a segue — the esthetic dental treatment that enables them to ask further questions and get the smile they want.”

That ’want’ is now a $600 million business. But sifting through all the options to make a final decision on how to safely get that mouthful of sparkling white teeth will offer an often-confusing set of options.

So buyer beware — before biting the bullet. 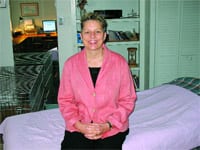 The Power of Touch Meet Terri Neal, Massage Therapist to the Elderly

Assessing the Impact of Smoking on Health