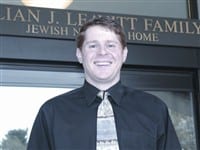 Did you hear the one about the man and his cat?

Scott Ziskin likes to tell that story. The man’s name is Jim, and when he first came to the Julian J. Leavitt Family Jewish Nursing Home in Longmeadow, he was withdrawn and uninterested in what went on around him.

One day, said Ziskin, executive vice president of the nursing home, Jim happened to be sitting in a lounge area when a stray cat who had been hanging about the grounds found her way into the building. They met. They bonded.

As it turns out, Jim had given up his cat, Sylvia, when he came to the nursing home, but this stray began to open him up socially. So the residents of the home adopted the cat, collecting money for her food, and named her Sylvia. Now, every morning at 7:30 a.m., Jim’s up, calling the cat and retrieving her food from the kitchen.

“You could see the change in him when we adopted the cat,” Ziskin said. “He just came out of his shell.”

It’s a touching story, but it’s also an example of the family atmosphere that the Jewish Nursing Home seeks to project, Ziskin said. The idea is to create a nursing home that doesn’t feel like one, and, in these days of tight budgets and sicker residents, that kind of emphasis goes a long way toward retaining a strong staff and building a comfortable home for seniors.

By stressing family, spirituality, and a strong dose of volunteerism, Ziskin told The Healthcare News, this 92-year-old facility is well-equipped to face the myriad challenges facing the modern elder-care culture.

The Jewish Nursing Home is part of a Longmeadow campus, under the umbrella of Jewish Geriatric Services (JGS), that employs some 500 people and includes separate facilities for home health care, assisted living, primary care, and federally subsidized housing, among other services — all of which can provide a continuum of care at one location for seniors as their medical and living needs change.

The nursing home itself, which originated in Springfield in 1911 but moved to Converse Street in Longmeadow in 1972, now includes 200 beds, 112 of which are in private rooms.

The center’s Alzheimer’s unit, completed in 2000, takes up 80 of those beds, and this is where some elements of the nursing home’s focus on the comforts of home take shape, Ziskin said. For example, the area features an indoor gazebo and patio and an outdoor courtyard and circular walking path, providing residents with the opportunity to enjoy nature while staying safely inside the unit itself.

“They’re free to walk and live their lives to the fullest,” Ziskin said, adding that the unit was designed with guidance from the Alzheimer’s Association. Small touches include soft pastel colors on door frames to help residents identify their rooms, and a punch-code system on all entryways to maintain security.

The nursing home also includes a 12-bed, short-term unit where patients with acute needs, from cardiac conditions to recent strokes, can rehab for between seven and 30 days.

Part of the challenge for any nursing home today, Ziskin said, is the fact that residents are sicker than they used to be. They’re living longer, first of all, and acute-care hospitals discharge patients much more quickly than they used to. But home health care has also changed the face of nursing-home care, allowing seniors who aren’t quite as chronically ill to live at home, leaving nursing homes with sicker residents who have fewer resources.

It’s a challenge the Jewish Nursing Home gladly embraces, he said, noting that spirituality is a growing part of meeting residents’ needs. A grieving outreach allows residents to attend memorial services on the floors of residents who die. Meanwhile, the director of pastoral care, Rabbi Devorah Jacobson, arranges not only Jewish religious services but those for other faiths, such as a monthly Catholic mass. A wide-ranging library of resources is also available.

“What really makes us different is that we include spirituality in everything. We encourage a level of participation from everyone,” Ziskin said, adding that the support of the Jewish community — and the general medical community — in Greater Springfield has been a crucial factor.

“It’s helped us to stave off the changes in health care and position ourselves to meet people’s needs,” he said. “Every challenge we face, from reimbursement issues to higher acuity, we know we’ll be able to meet.”

From the beginning, Ziskin said, the Jewish Nursing Home has stressed community — and not just from within. Whether based in Springfield or Longmeadow, the facility has always tried to cultivate ties to — and support from — the outside community.

Today, that translates into an impressive culture of volunteerism that boasts 160 regular participants from Greater Springfield — aged 15 to 91 — who host bingo groups, talk current events with residents, run a gift shop and coffee shop, and, perhaps most importantly, maintain the Caring Visitor program. That’s an effort to pair up residents with people with similar ages, backgrounds, and interests to provide conversation and companionship for those who might be lonely.

The nursing home doesn’t skimp on recreational activities, either, from indoor games to van outings to area attractions. “We’ve tried to upgrade the traditional role of the nursing home, to be creative and institute programs that are appropriate and make sense,” Ziskin said.

Keeping residents happy is one key to keeping employees satisfied, he added — and the nursing home has aggressively sought ways to improve the job for its staff. For example, a clinical ladder program puts 10 CNAs per year into course work to improve their skills; 19 employees have completed the program so far.

In addition, the entire campus participates in the NICHE program, which stands for Nurses Improving Care for Health System Elders. The quality-improvement program sends administrators to a two-day seminar to learn best practices in nursing care; they, in turn, educate their employees in the NICHE paradigm.

Outreaches like these — in addition to the family atmosphere that extends to the staff — are part of the reason turnover is so low at the nursing home, Ziskin said. Two-thirds of the current workforce have been around for more than two years, and two-thirds of those employees have been with the company for more than five years. Some nurses and housekeepers have called the center home for more than a quarter-century.

“When people enjoy coming to work, it makes a difference that you can see,” he said. “You can look in the eyes of the residents and staff and know you’re helping them live life to the fullest. It makes it all worthwhile.”

To Ziskin, it simply feels like home. He’s trying to make sure all 200 residents — and one cat — agree.

Indecent Proposals For Nurses Experiencing Harassment At Work, The Law Is On Their Side