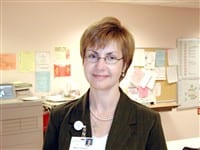 The surveys are unannounced, but for most nursing homes, they come like clockwork, about once a year. The experience goes something like this:

Inspectors from the state Department of Public Health (DPH) spend the day speaking with administrators and employees, examining facilities and services, and always making notes. Those notes become a number: the home’s composite score, which goes on record on a database and Web site. Low-scoring homes are required to submit a plan of correction.

The scores can reflect well on a nursing home, or they might not. But how much stock do administrators put into the surveys, known collectively as the state’s Nursing Home Report Card?

The answer seems to be … some.

“As with anything else, if I were a consumer, I wouldn’t put all my eggs in one basket,” said Nancy Peckham, administrator of the Transitional Care Center (TCC) at Holyoke Hospital, which typically scores high on the survey.

Lori Todd, administrator of Loomis House in Holyoke, agreed that the survey has some merit, but only to a point. “It’s a piece of your performance, but it certainly does not tell the whole story,” she said. “It’ll give you the numbers, but it doesn’t tell you what’s behind the numbers. It’s a gauge, but it does not give you the whole picture.”

As The Healthcare News prints its annual update of the nursing home ratings for Western Mass. facilities (see pages 17-19), we take a look at how the surveys are viewed inside the care centers — and how administrators do their best to prepare for the sudden visits.

To create the Report Card that the DPH maintains and posts online at www.state.ma.us/dph/qtool/qthome.htm, each facility is rated on how well it meets a meticulous set of standards. The 44 items, broken into five categories — administration, nursing, resident rights, food service, and environment

The three most recent visits are incorporated into the current score, which accounts for the maximum of 132; therefore, new homes are not included on the database until they have been visited three times.

Survey scores, which are determined by a visiting team of health care professionals, including registered nurses and licensed social workers, are influenced not only by the survey team’s observations but by interviews with the facility’s medical and administrative staff, patients, and families.

Administrators say it’s impossible to be perfect on any given day, but many don’t fear the surveys for one simple reason: their own, internal review processes are, in most cases, even more rigorous.

“What we try to do every day is to meet all of our own standards, and there are more than 500 of them,” Todd said. “I don’t think we necessarily try to gauge our day- to-day activities to meet only the state’s performance tool; we try to meet every standard. I don’t know how the state decided to use only these, but it’s just a simplification of our own standards.”

The state’s rating system has some independent backing from the Massa-chusetts Extended Care Federation, which helped to develop it. As an advocacy group for about 500 nursing homes and their 54,000 residents, the MECF not only gets involved in legislative and financing issues affecting nursing homes, but also helps facilities develop their own quality-improvement programs. In effect, the organization provides tools to help homes reach the state goals it has helped to establish.

One of the inherent difficulties of the rating tool, however, is the fact that facilities differ greatly in their mission.

For instance, Holyoke’s Transitional Care Center, which is a short-term rehabilitation facility, with most patients staying from 10 to 14 days, is far different in its goals than a traditional long-term nursing home. So survey items which deal with long-term issues, such as diminishment of residents’ abilities and the onset of pressure sores, are less relevant there. “It’s kind of tough, since patients come and go all the time,” Peckham said.

The TCC is also reviewed on a different schedule, she added. “We’re sort of in a funny situation. We’re a small facility and have a short survey, so they just fit us in, and it’s hard to guess when they’ll come. We sort of prepare for it all year round.”

However, there’s really no way to prepare specifically for this survey, administrators say, since facilities generally set their own standards; in the example of the TCC, for example, Holyoke Hospital runs its own audits of the unit.

Of greater concern, facility directors fret, is that consumers accessing the information have no way of knowing the rationale behind a certain score.

“It’ll tell you what standards you’ve met and what you haven’t met, but it doesn’t tell you why it hasn’t been met,” Todd said. “Sometimes it’s a very simple situation, but I don’t think what they give you for an explanation is enough for someone to make a judgment.”

The DPH itself seems to agree, encouraging visitors to the Report Card site to visit any nursing home they might be considering and spend time touring the facility and talking with residents, families, and staff members. The MECF goes even further, exhorting people to take these steps before a nursing home stay is imminent, as many facilities have long waiting lists, and the cost of care — which averages between $40,000 and $65,000 per year — often comes as a surprise and requires some serious financial planning.

“If someone is looking to choose a nursing home, they should make a site visit, speak to people who live there, and have a conversation with the admissions person,” Todd said. “These ratings can give you a starting point for that conversation, but certainly not a comprehensive look.”

“People need to educate themselves,” Peckham agreed. Because, while the state’s Nursing Home Report Card does provide a starting point, the end destination still needs to be a personal visit, administrators say — and that’s something no Web site can offer.