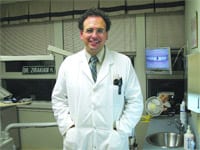 Not everyone takes their dental health to heart. Maybe they should.

A study reported last month in the New England Journal of Medicine suggests that periodontal disease contributes to blood vessel dysfunction, an early indicator of atherosclerosis, or hardening of the arteries — a major factor in cardiovascular disease, which, in all its forms, is the number-one cause of death worldwide.

The British study enrolled 120 otherwise healthy patients with a severe form of periodontitis in a six-month trial and compared the effects of regular tooth cleaning alone with those of intensive periodontal treatment, such as scaling and root planing, locally administered antibiotics, and tooth extraction when necessary. The intensive-treatment group showed statistically significant improvements in blood flow within two months of treatment, and further improvements six months after treatment.

“In recent years, there have been numerous hypotheses linking periodontal infections to atherosclerosis — the process that leads to blockage of blood vessels,” noted Dr. Maurizio Tonetti, executive director of the European Research Group on Periodontology and the head researcher on the project. “This study validates the effectiveness of intensive periodontal treatment in affecting vascular health.”

Even before the article appeared, Dr. Gregory Zirakian, a family dentist in East Longmeadow, told The Healthhcare News that tooth and gum health is about more than the mouth.

“There’s also a link between gum disease and heart disease,” he said. “When plaque and tartar build up in the mouth, those bacteria get into the bloodstream. That can cause plaque accumulation, which causes heart attacks — all because the bacteria in your mouth found its way to another part of the body.”

According to the American Academy of Periodontology, more than one in three Americans over age 30 have some form of periodontitis, which in many cases go untreated.

“The bottom line is that we see people not taking care of certain areas — they’re not getting enough brushing or flossing — and we try to guide them back to where they need to be,” Zirakian said.

But most patients don’t yet know that the mouth can affect overall health. John Deanfield, a senior author of the study, noted that previous studies have shown an association between periodontitis and blood vessel dysfunction, heart attack, and stroke. “However, a clinical trial was required to test whether these links could be causal. This is the first time that a direct link has been made between treatment for gum disease and improved circulatory function.

“This finding therefore has potential implications for public health,” he added, “but further studies are now required to determine whether the treatment of severe periodontitis could directly contribute to the prevention of disease of the arteries, stroke, and heart attacks.”

For Zirakian, that further justifies his emphasis on developing good habits early in life.

“Fifty percent of the population is not going to the dentist regularly, and that means they don’t know what’s going on there,” he said. “And what they don’t know is going to cause problems. If a woman has gum disease, for example, that bacteria is transferable to her baby when she kisses the baby.”

Not to mention the fact that strong habits tend to be passed down from parents to children. For that reason, the cardiovascular news can’t hurt, dentists say, because it might get people back into the chair to see what else they’ve been missing.

“For the older people losing their teeth, or the people who haven’t gone to the dentist in years,” Zirakian said, “it’s a great satisfaction to give them back their youth, their self-esteem, and their ability to smile in public” — and perhaps help set their hearts at ease.