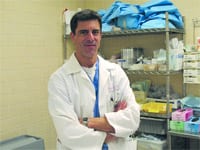 Call it too much of a good thing.

It’s a common lament of parents these days: “I had never heard of peanut allergy when I was in school!” But these days, schools, day care centers, and even airlines have had to take steps to accommodate children who might go into shock — or worse — at the slightest exposure to peanuts — that kid-appeasing treat that makes up one-half of the quintessential childhood sandwich.

Nancy Anderson, pediatric dietitian at Baystate Medical Center, said scientists are still looking for definitive reasons for the dramatic increase in peanut allergy, but suggested that higher exposure has at least something to do with it.

“The current theory is that our intake of peanuts has increased significantly over the past 20 years in this country, especially since it’s a cheap protein,” she said — not to mention the fact that it’s a kid-friendly food that’s easy to prepare. That makes sense, she said, considering the fact that the number-one food allergy in Asia is rice, followed by soy. In the same way, studies show that Scandinavian people have a much higher than average tendency toward allergy to cod.

“It’s just a matter of dose,” she continued. “What’s happening is that people are eating more of it, and if you have a family history of allergies of any sort, you can become more sensitized. Or, if a mother has a family history and eats a ton of peanuts, the baby can become sensitized in utero from the mother’s diet, or from proteins that pass through the breast milk.”

Whatever the reasons, the number of children wearing allergy bracelets, carrying doses of injectable epinephrine, and being taught to read food labels is clearly on the rise. Those who aren’t diligent, or who don’t know they’re allergic, might end up as one of the 30,000 peanut-related emergency room visits per year in America — or, tragically, one of the 200 or so deaths.

This month, The Healthcare News examines this startling trend, and what health professionals say should be done both to prevent the onset of peanut allergy and to treat it in the event of an attack.

Peanuts are not true nuts, but legumes. Still, doctors typically recommend those with peanut allergy to stay away from tree nuts — walnuts, cashews, pecans, etc. — as well. Indeed, the main defense against any food allergy is avoidance. In general, food labels prominently state the presence of milk, soy, wheat, eggs, or nuts, but it’s not always an easy exercise, particularly when eating out.

“Many allergy-producing foods such as peanuts, eggs, and milk, appear in foods one normally would not associate them with,” said Krisha McCoy of the National Institute of Allergy and Infectious Diseases. “Peanuts, for example, are often used as a protein source, and eggs are used in some salad dressings. People can avoid most of the things to which they are sensitive if they read food labels carefully and avoid restaurant-prepared foods that might have ingredients to which they are allergic.”

It’s serious business when 1/44,000th of a peanut kernel can prompt an allergic reaction in some sufferers, and when kids have wound up in emergency rooms after breathing in peanut dust or coming into skin contact with peanut butter.

“Patients with severe food allergies must be prepared to treat an inadvertent exposure,” said McCoy. “Even people who know a lot about what they are sensitive to occasionally make a mistake.” To protect themselves, she said, people who have had anaphylactic reactions to a food should wear medical alert bracelets or necklaces stating that they have a food allergy and that they are subject to severe reactions.

“The thing we worry about most is anaphylaxis,” said Dr. Paul Gerstein, chief of Emergency Medicine at Holyoke Medical Center. “You can have a mild allergic reaction that can include itching and hives, but if it doesn’t go any further, that can usually be treated with an antihistamine like Benadryl.”

Anaphylaxis, on the other hand, takes two forms, both of which can occur simultaneously, he said. One is respiratory, and can manifest itself as swelling of the lips, tongue, and face, as well as tightening of the throat and even respiratory arrest. The other response is cardiac, and can result in dilation of the blood vessels, slowing of the heart, lowered blood pressure, and shock.

“The first reactions are often mild, but they can become more severe with each progressive exposure,” Gerstein said. And although an emergency room physician will treat a serious allergic reaction with a shot of epinephrine, there’s no guarantee that a patient will make it to the hospital in time. “You want to stop it in its tracks. If might take 20 minutes to a half-hour to reach the emergency room, and that’s long enough to die.”

That’s why people with a known allergy to peanuts or other anaphylaxis-related allergen are typically advised to carry an EpiPen, a measure of epinephrine loaded into a self-injecting hypodermic needle. Injected into the leg, the EpiPen typically brings about enough stability for the sufferer to make it safely to the hospital.

Are We Too Clean?

That’s small comfort for parents grappling with a problem they just don’t remember anyone dealing with 20 or 30 years ago. One theory about the increased prevalence, said Anderson, has to do with another generational change — the way some parents simply don’t let kids be kids.

“One theory is that our society has become bug-phobic and germ-phobic when it comes to kids,” she said. “We clean and clean and use antibacterial lotions, and kids don’t get exposed to a lot of dirt and germs like we used to.” It doesn’t help that the Internet and video games have supplanted much of the outdoor time during which children are exposed to a multitude of germs.

Anderson noted that studies suggest that children who grow up on farms, and spend plenty of time around dirt and animals and animal waste, don’t have the same problem struggling with allergies as children in the super-sanitized suburbs.

“The thought is that, when you’re young, you need to turn on the path of your immune system that fights infections,” she said. However, if that doesn’t get switched on by a steady dose of germs to fight — if, in effect, it’s bored — the body then switches on the other side of the immune system, the autoimmune arm that can turn against the body through allergic reactions.

“If we let our kids get exposed to more germs earlier in life, the immune system will be so busy fighting infections that it won’t need to rev up the other arm,” she said. “That’s why not only allergies, but conditions like Crohn’s disease are going up in frequency as well. It’s just a theory, but it seems that allergies and autoimmune disorders are on the rise at the same time.”

Still, increased exposure to peanuts remains atop many researchers’ lists of theories. “Peanut butter has been a mainstay of kids’ lunches,” Anderson said. “They eat a lot of it, and at an early age, and their mothers are eating it. So babies are being exposed early on even if their mom isn’t allergic.”

One school of thought, ironically, suggests that children should be given small, sensitizing amounts of peanut butter early in life to build up a tolerance, in the same way that allergy shots work. But Anderson said allergists will typically not recommend this method.

“And in a family where someone already has an allergy, the family should never do that,” she added — not only because the incidence of peanut allergy is greater if siblings are allergic, but to avoid exposing the already-sensitive child to the allergen. “You don’t want little Johnny’s throat to close.”

McCoy noted that breast-feeding an infant for the first six to 12 months of life has been suggested as a way to avoid milk and soy allergies, and excluding all solid foods during that time can cut down on the incidence of other food allergies — particularly if the parents have allergies, increasing the probability in the child.

“There are some children who are so sensitive to a certain food, however, that if the food is eaten by the mother, sufficient quantities enter the breast milk to cause a food reaction in the child,” McCoy said. “Mothers must sometimes themselves avoid eating those foods to which the baby is allergic.”

She conceded that breast-feeding in itself is not proven to prevent the development of allergies later in life, but delaying the introduction of certain foods into the child’s diet will delay the onset of allergies — and perhaps, researchers say, prolonging the allergy-free period gives a child a better chance at avoiding them completely later in childhood. Peanuts and peanut butter, some doctors say, should be avoided altogether until at least age 3.

Still, it’s a minefield out there, as parents must educate their peanut-allergic children not to share food among friends at lunch and not eat anything without knowing what’s in it. Even cross-contamination is a problem, meaning that many chocolate bars — which are produced on equipment that also handles peanuts — are off-limits. Try explaining that to a kid staring longingly at a vending machine, especially one who’s allergic to peanuts but has never had a life-threatening scare in the ER.

“Even if the reactions have been mild in the past, I would approach every case as a potentially severe peanut allergy and avoid all peanuts and tree nuts and carry an EpiPen,” Gerstein said. “It’s difficult to eliminate it 100{06cf2b9696b159f874511d23dbc893eb1ac83014175ed30550cfff22781411e5} from a child’s environment, when someone opening a can of nuts nearby could cause a reaction.”

It’s a lesson that too many children are learning the hard way every year.