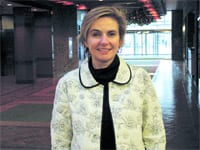 Kelly Aiken knows there’s no quick fix for the ongoing nursing shortage, which has seen nurses retiring at a faster rate than newcomers are entering the workforce — at a moment in history when Americans are living longer, with greater health needs, than ever before.

However, Western Mass. hospitals and colleges are confident that a program funded by a Robert Wood Johnson Foundation grant will be successful at drawing more new nurses into the pipeline in the coming years. Even the name exudes optimism: Collaborating for the Advancement of Nursing: Developing Opportunities, or CAN DO.

Aiken, hired by the Regional Employment Board of Hampden County (REB) to direct the program, said the two-year effort will focus on developing and strengthening partnerships between colleges and health care employers.

The idea is not only to recruit a larger, more culturally diverse pool of nurses into the pipeline, she said, but to help current nurses achieve advanced degrees so they can eventually bolster the depleted ranks of nursing educators at area colleges.

“We’re focused on coming up with a plan for advancing nurses, whether it’s a high school student interested in becoming a nurse or someone with an associate’s or bachelor’s degree who wants to move up through the educational system,” Aiken said. “We want to create a seamless system for doing that.”

Eileen Breslin, dean of the School of Nursing at UMass Amherst, said the goal of streamlining nurse advancement deserves serious effort. “This creates a model for nursing education in the future, so it’s essential that we participate in this project,” she said.

This month, The Healthcare News delves into the specifics of this new, regional program — and what its hopeful participants believe it can do.

The first year of the project will see the establishment of two pilot programs — called STAR and Nurses Succeed — with the goal of immediately boosting nurse recruitment and retention, Aiken said.

She said the thread that runs through the entire CAN DO project is employers and educators partnering to support current and future nurses, and this goal is especially reflected in the STAR pilot.

“This project looks to create systemic change in the way nurses are advanced currently,” said William Ward, REB’s executive director, who explained that there is no “fast track” for a nurse with an associate’s or bachelor’s degree to work toward a master’s degree and the opportunities that come with it — especially while trying to balance work, school, and perhaps parenting.

“We need to find a way to allow talented nurses to adjust their work schedule — as well as their course schedule — so they can move more quickly toward getting their advanced degree,” he continued.

“In the meantime, we need to find ways to provide them with some level of income while they’re doing that, and also get them waivers to serve on the faculty while in graduate school” — an effort that would boost nursing faculty levels, in turn allowing schools to take in more students.

Aiken admits that the approach is a long-term one, but said planting these seeds will contribute to rising numbers of nurses and nursing faculty in the years to come. She also noted that faculty mentors will work with the students on dealing with the scheduling conflicts and other life issues that so often stall attempts at degree completion for working adults, especially those with families.

“There are growing numbers of people on waiting lists” for area nursing programs, Ward said. “They’re well-qualified, but are unable to get in because the faculty just aren’t there.”

“Part of the problem with the nursing shortage is definitely a capacity issue,” Aiken said. “We’re responding to the faculty shortage. It’s our attempt to get people into the pipeline and grow our own faculty for schools across the region.”

Meanwhile, the Nurses Succeed pilot is designed to expand the existing student support network for minority and disadvantaged students to increase graduation and licensing rates, as well as helping minority LPNs working in long-term care as they move toward associate’s and bachelor’s degrees.

“We’re encouraging and supporting them as they decide to work toward a greater education. The target audience is disadvantaged nurses, and we’re very broad in that categorization,” Aiken said. She added that the program also strives to develop a “cultural competency” among educators and employers to bridge ethnic and demographic divides. “There’s a shortage of nurses who reflect the greater community, so we have that intention as well.”

Ward agreed. “The racial and ethnic issue will become even more pronounced,” he said. “We need more Latino and Latina nurses, and more African-American nurses, so that there can be some level of cultural and ethnic understanding between these caregiving nurses and their patients throughout our region.”

Breslin noted that health care employers and the area’s colleges have long forged relationships based on mutual need, but the CAN DO project promises to take them to a new, higher level.

“We already have strong collaborative partnerships with the local health care industry,” she said. “This will further solidify those, and also engage the community colleges — and everyone who has a vested interest in nursing education and health care — to the table. We have a very broad and diverse consortium, and what we’re hoping to achieve is to institutionalize this consortium.”

“As a result of the planning process, we expect to formalize these partnerships,” Aiken agreed, adding that “we’re taking a regional approach. We’d ultimately like to be seen as a pilot for things that will happen at the state level, by defining the core competitiveness issues in the future.”

That’s why the program participants are looking five to 10 years down the road, not just at the next 24 months. Year two of the initial CAN DO plan involves implementing a five-year plan for a restructured nursing advancement system — in effect, evaluating how effectively the two pilot programs seem to be working, and exploring changes in how both the colleges and employers are attracting nurses and helping them advance. Those changes might include sharing curricula, centralizing the advising services that the colleges offer, and collaborative planning for clinical training.

“We need different institutions to work closely together to come with common curricula for the nursing profession, common application processes, and closer sharing of faculty,” Ward said, noting, for example, that “all these institutions understand their own particular processes and culture, but how does a two-year school differ from a four-year school in their approach to nurse training?”

The concept of closer partnerships across the board is one that was modeled successfully on the West Coast by the Oregon Consortium on Nursing Education, Aiken said, and she’s confident that Western Mass. will see positive results as well.

“I’m an eternal optimist,” she said. “I have a background in large-scale planning processes, and that’s one reason why I was asked to take on this project. But I also have a lot of confidence in this group of people. They’re willing to sit at the table because they recognize that something has to change — and to me, half the battle is getting people to sit at the table.”

The other half is actually producing a young and diverse pool of nurses in the field — and that’s a tall order that will take more than just a can-do attitude.