Citing steps that Baystate Medical Center has taken to improve patient safety, a national health care quality organization has named it one of the 50 safest hospitals in the nation.

In issuing its first-ever Top Hospitals List, the Leapfrog Group recognized hospitals that have made specific strides in areas ranging from computerized order entry to ICU staffing, all with an eye on reducing preventable medical errors and creating an atmosphere in which patients can feel safe.

“We were very gratified to be recognized as one of the safest hospitals in the country,” said Dr. Evan Benjamin, vice president of Healthcare Quality at Baystate. “It’s really a testimony to a lot of hard work.”

The Leapfrog Group is a national coalition of businesses and public agencies that promotes and rewards health care safety and quality through its collective insurance-buying power. Baystate’s recent efforts to improve on those counts are part of its participation in the Institute of Health Care Improvement’s 100,000 Lives Campaign, which highlights efforts to prevent avoidable patient injuries and deaths nationwide.

Computerized physician order entry. Only 7{06cf2b9696b159f874511d23dbc893eb1ac83014175ed30550cfff22781411e5} of responding hospitals are equipped for doctors to enter patient prescriptions and other orders into computers linked to error-prevention software.

The Leapfrog survey has been endorsed by national oversight groups, Benjamin noted.

For example, “instead of just talking about improving health care quality, the Leapfrog Group has been taking innovative steps to support hospitals doing it,” said Mark McClellan, administrator of the Centers for Medicare and Medicaid Services. “This shows the benefits of better information about quality of care, and is helping Americans get better care and better value.”

But it’s not a result that happens overnight, Benjamin said. “When you sit down and look at the criteria used to judge these outcomes, it’s obvious that it took a significant amount of work to get here,” he told The Healthcare News. “It’s really a journey we’ve been on for the past five years.”

Indeed, 2001 was a turning point, he explained. That was when Baystate became one of the first hospitals in the country to institute a safety reporting system whereby doctors and nurses were encouraged to openly talk about errors as a way to learn from them.

“That was a dramatic change in our culture, and in many ways has been a cornerstone of a new culture of safety,” Benjamin said. “We’ve moved away from the old strategy of keeping it to yourself, which is the model I trained with. Lawyers will tell you not to say anything, but we encourage openness and transparency when we make mistakes.”

Lives in the Balance

Officials at Leapfrog believe such culture changes are critical to saving lives and avoiding unnecessary harm. The group cites a 2004 study by Dr. John Birkmeyer at the University of Michigan claiming that, if all non-rural hospitals in the U.S. implement computer physician order entry, ICU physician staffing, and evidence-based hospital referral, more than 65,000 lives per year could be saved, and more than 907,000 serious medication errors prevented.

“Our recognition by the Leapfrog Group, combined with a number of other significant national quality awards, as well as our participation in a number of major national and statewide quality initiatives, reinforces the fact that our physicians, nurses, and the entire health care team are continuously striving to offer the highest quality patient care on a daily basis,” said Dr. Loring Flint, Baystate’s senior vice president of Medical Affairs.

Among those other quality recognitions:

“While Baystate Medical Center has received several national quality awards recently recognizing our talented and compassionate doctors, nurses, and other caregivers for their outstanding patient care, NRC’s Consumer Choice Awards is especially meaningful since it is based on measures indicative of quality from a consumer’s perspective,” said Mark R. Tolosky, president and CEO of Baystate Health.

Together, Benjamin said, the honors recognize that Baystate has made a concerted effort to improve quality of care across the board.

“Both in our leadership and with our physicians and nurses,” he asserted, “we have paid specific attention to patient safety.” 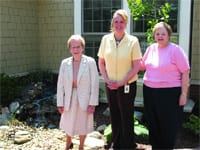