NORTHAMPTON — At the Center for Complementary Therapies at Cooley Dickinson Hospital, healing is about the mind and spirit, as well as the body.

Effective immediately, a variety of new complementary therapies, including acupuncture, aromatherapy, healing touch, healing music, and self-hypnosis/guided imagery have been added to the center’s menu of services. These modalities are offered in addition to therapeutic massage, prenatal and postpartum massage, and Reiki, services that have been offered at the specialty center since 2004.

By offering these expanded services, Bridget Griffin Thompson, coordinator of Complementary Therapies and Women’s Health, says CDH is responding to clients’ needs and embracing a trend toward offering complementary services in a hospital setting. She cites Hartford Hospital in Connecticut and Memorial Sloan-Kettering Cancer Center in New York as offering similar healing methods.

According to the National Center for Complementary and Alternative Medicines (NCCAM), a recent survey conducted on complementary and alternative medicine (CAM) describes the characteristics and CAM offerings of nearly 1,400 hospitals throughout the U.S.

In 1998, the National Institute of Health (NIH) created the NCCAM, the federal government’s lead agency for scientific research on complementary and alternative medicine. It is one of the 27 institutes and centers that make up the NIH within the U.S. Department of Health and Human Services.

“What we’re offering is another spoke in the wheel of healing,” said Thompson. “We’re providing complementary services, another venue for enhancing one’s health and well-being. We’re treating the whole person in a variety of ways.”

Located on the second floor at CDH, outside of the Childbirth Center, the Center for Complementary Therapies opened in 2004 to meet the needs of pregnant women and women who had just given birth. Over the past several years, the center has expanded its services to offer therapeutic massage, pre- and postpartum massage, and Reiki treatments to patients, employees, physicians, volunteers, and community members. Call (413) 582-2424 for an appointment. 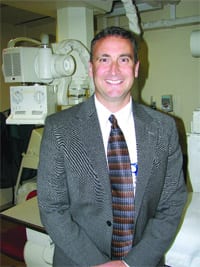