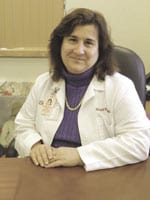 It’s a devastating and complex disease that causes frustration, embarrassment, and depression, but elicits little sympathy from many people who find it difficult to believe that the symptoms are real.
But chronic fatigue syndrome, or CFS, does exist, and it robs individuals of the ability to live their lives in a normal fashion. It affects three to five times more women than men, and sufferers are typically between the ages of 30 and 60. However, men and children do get it, and the Centers for Disease Control and Prevention (CDC) estimates that about 900,000 Americans suffer from the disorder, which affects the brain and multiple body systems.
“The problem is that there is no test to show if someone has it, no known cause that is agreed upon, and no recognized treatment, which makes it extraordinarily frustrating, because many people, including some medical practitioners, don’t buy into the fact that it is a true entity,” said Dr. Sharon MacMillan of Associates in Women’s Healthcare, P.C. in Agawam.
The primary symptom is disabling fatigue that doesn’t improve with rest and is so pronounced that it makes it almost impossible for some people to get out of bed, take a shower, go to the mailbox, or perform other simple tasks of daily living.
MacMillan said the fatigue can be compared to the way people feel when they have the flu and are too weak to lift their heads off the pillow. “It prevents people from going to work, shopping, or planning birthday parties for their kids. But they are often embarrassed because they feel as if they should be able to power through it. People tell them if they push themselves they will feel better, but that’s the exact opposite of what they should do.”
The CDC says CFS may be worsened by physical activity or mental exertion. But a diagnosis can be made only if someone has had severe chronic fatigue for six months or longer that has not been caused by ongoing exertion or other medical conditions associated with fatigue.
The fatigue must also significantly interfere with work and daily activities, and the individual must have four or more of the following symptoms: sleeping without feeling rested; significant impairment of short-term memory or concentration; pain in the joints without swelling or redness; tender lymph nodes in the neck or armpit; a sore
throat that is frequent or recurring; headaches; and exhaustion after exertion that lasts more than 24 hours.

MacMillan said a group of doctors and nurses in Cook’s County Hospital in Los Angeles were afflicted with the symptoms of CFS in 1934, and there was a similar outbreak that affected the medical staff of a London hospital in 1955.
However, severe fatigue has been documented around the world for more than 150 years without any known cause. In fact, fatigue illnesses have been labeled epidemic neuromyasthenia, myalgic encephalomyelitis, atypical poliomyelitis, chronic encephalomyelitis, and various other names in different times and countries.

The condition has also been referred to as ‘post-viral fatigue syndrome,’ and in Los Angeles, it was called ‘post polio fatigue’ because experts thought it might be related to exposure to the polio virus. The CDC officially identified it in 1988 and gave it the name chronic fatigue syndrome, with a definition that was changed in 1994 by an international consensus group.

“The problem is that there is no test to show if someone has it, no known cause that is agreed upon, and no recognized treatment, which makes it extraordinarily frustrating, because many people, including some medical practitioners, don’t buy into the fact that it is a true entity.”

MacMillan said some people exhibit symptoms of CFS after contracting the flu or another virus. “They can become profoundly ill with this type of fatigue for several months, which is why it is sometimes called post-viral illness,” she said.

Anemia, diabetes, an underactive thyroid, and Lyme disease can mimic CFS, but Lyme disease can be difficult to diagnose. “The test is finicky, and you have to have it done three times to believe it is really negative,” MacMillan said, adding that one of her physician friends has a daughter whose tests for Lyme came back negative, but she suffered from a chronic-fatigue-like illness for about a year before it was finally correctly diagnosed through another test.

CFS is also sometimes confused with fibromyalgia. Although that illness can cause fatigue, people with fibromyalgia suffer from exquisitely painful trigger points, muscles, and joints, which are not symptoms associated with CFS. “It can be difficult to differentiate between the two, but people with fibromyalgia have increased sensitivity to pressure touch and joint pain,” MacMillan said. Because it is so difficult to diagnose, people often go from one doctor to another, searching for an answer as to why they are so exhausted. But many stop trying.

“They can’t focus or get out of bed, and the amount of energy it takes to research a new doctor and get to an appointment can take a superhuman effort,” MacMillan said. “It can be extraordinarily frustrating. I have seen patients who were told all they needed was to improve their relationship with their husband or that an antidepressant would get rid of it. So it takes a lot of courage to go to yet another healthcare provider.”
The symptoms can range from mild or moderate to profound, and there appears to be a hereditary disposition toward the condition.

“Some people can go to work, but they have to come home and go right to bed afterward,” MacMillan said, explaining that, although everyone has felt fatigued at times, medical science has not been able to determine the cause of the feeling. And although CFS is debilitating, fatigue is not an accepted diagnosis for a disability claim.

Recovery is possible, but MacMillan said one of the keys is to set small goals and not push beyond them.

“Some people will force themselves to go to work for an entire day, then find they can’t return for another two weeks,” she said. “Co-workers don’t understand this and often act as if the person is malingering because everyone else comes back when they have been sick. People with CFS want to return to work, but they can’t.”

“They can’t focus or get out of bed, and the amount of energy it takes to research a new doctor and get to an appointment can take a superhuman effort. It can be extraordinarily frustrating. I have seen patients who were told all they needed was to improve their relationship with their husband or that an antidepressant would get rid of it. So it takes a lot of courage to go to yet another healthcare provider.”
And since laboratory tests don’t indicate a problem and some people have been told by their doctors there is nothing wrong with them, they may try to power through their symptoms without success. “Lives break up over it, but the
syndrome really exists, and people who have it are not crazy or trying to hide from life. They have a physical illness,” MacMillan said.

In some cases, people get desperate and fall prey to promises made by charlatans touting products via the Internet that offer miracle cures. “But if it was truly a miracle, everyone would know about it,” she continued.

The CDC reports that people get better when they work in collaboration with a team of doctors and other healthcare practitioners, who might include rehabilitation specialists, mental-health professionals, and physical or exercise therapists who create an individualized treatment program that addresses symptoms, coping techniques, and the management of normal, daily activities.

But the first step is to find a physician who understands the condition and believes the person’s complaints are legitimate. Once that is accomplished, “counseling is an excellent cornerstone to help people understand not only what is going on, but that they can be empowered in their own treatment; they should try things until they find something that works,” MacMillan said, adding that people can usually be helped with emotional and herbal support, coupled with pacing or graded exercise.

This exercise modality involves establishing a baseline of activity that the person is able to engage in without tiring, then having them do just a little more. “If someone can go for a walk, they can add two or three minutes to it,” MacMillan said. “The key is to increase activity very gradually, which, for some, may simply mean getting out of bed, taking a shower, and getting dressed before they lie down again.
But if people push themselves too hard physically, they will go backwards,” she told HCN.

Although antidepressants don’t cure CFS, if a person has become depressed as a result of losses they have suffered, medication can help. It is also important to have a physician confirm the condition and explain how crippling it is to family members, as people have lost their jobs, relationships, marriages, and homes due to their inability to work or conduct themselves normally. “It can be heartbreaking when people don’t understand you are doing the best you can under very difficult circumstances,” MacMillan said.

She often prescribes organic herbal medications to help with symptoms, including an adaptogen tea that contains licorice, eleutherov, and other herbs that promote balance within the body and help it return to its normal state of health.

“However, herbs have some potential side effects — they are medicines, and it’s important to consult with a qualified herbalist to make sure what you want to take fits with your chemistry,” she warned. “Before anyone uses them, they should also make sure they don’t have any underlying medical conditions.”

MacMillan said some people have CFS throughout their lives, while others recover.

“But most people slowly improve over a period of years,” she added. “However, if it is post-viral, they can get better within months.

“The most important thing,” she went on, “is for them and the people around them to acknowledge that they have an illness, get help, and try to understand the disease.”