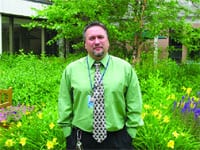 When asked how he wound up managing the Environmental Services department at Baystate Franklin Medical Center in Greenfield, Tom Sandomierski laughed and said, “it was really a matter of not knowing what I wanted to do.”

As he recalled, “originally, I went to college to study music, then I changed to art, then English lit. I was all over the map, and decided to take time off from college to work and really figure out what I wanted to do.”

So he took an entry-level position at Wing Memorial Hospital in Palmer, performing sanitation duties on the weekends. Eventually, he started taking on other roles, from cleaning rooms to stripping floors.

“I did every facet of the job. I learned the business that way,” said Sandomierski, who was eventually offered a role in management. “It calls on a lot of practical experience, and the there’s a technical side to it too.”

“It’s one of the single most important facets of the hospital business, the cleanliness of the environment,” he said. “It’s the first impression people get, the first thing they see. It’s no different than the hotel business, in that people walk in and want that great first impression. But not only does it have to seem clean, it actually has to be completely sanitized.”

Keeping the hospital clean is only one role for the Sandomierski and the 30-employee team he leads. Today, a heavy focus on a hospital’s environmental impact has changed the way facilities do business, from the products they use to the way they dispose of waste materials. It adds up to a challenge, he said, but one that has become music to his ears.

“I’m in charge of the housekeeping department, the sanitation, and the cleanliness of the environment,” he said. “That’s why we’re involved in the Green Team, because we’re looking at the environmental impacts of the chemicals we use, and we aid in the recycling program for paper and cardboard. The Dietary Department has a very comprehensive program for cans, plastics, things of that nature.”

The green culture in hospitals started years ago with a shift toward reusable containers to transport infectious waste, such as used sharps, for incineration, meaning less cardboard is used and fewer materials have to be burned.

“Now we’re using reusable containers for infectious waste, things soaked with blood, instead of virgin cardboard for the disposal of these items,” Sandomierski said, noting that the reusable containers are washed and sanitized by an off-site company that specializes in that work. “It saves us a lot of money yearly on virgin or even recycled cardboard. Now, we still have to incinerate, a process that’s required at the federal level, but that’s only for pathological waste, which comprises a very small portion of the waste stream.”

Hospitals, he said, reflect a move toward environmentally friendly practices throughout the waste-disposal industry. “Companies that are hauling waste have become more green-minded, and those technologies have come to us and turned into cost savings, and obviously the impact on the environment is much less.”

“With cleaning chemicals, it’s been difficult to go green completely,” he said, noting that there are no disinfectants that are completely benign in the environment, yet have the ability to kill the range of germs present in a hospital.

However, “the type we use is diluted and goes a long way, so we’re not using as many plastic containers,” he said. “That’s an important piece that shouldn’t be forgotten; we’re using fewer resources and not putting as many plastic bottles back into the system. I think that’s very positive as far as impact on the environment. In fact, containers are thrown out only when they become unreadable, because it’s important that everything is properly labeled and readable in the hospital setting.

“In that respect, we’re staying as green as possible,” he said. “Some of those green chemicals available in the industry right now, while they’re a little less harsh, they also come ready-to-use, so you’re using more containers — it’s kind of a catch-22.”

Sandomierski believes in the green-cleaning approach, but admits it’s easier to accomplish in the home environment. “It’s not as easy to do on the commercial level with the kinds of superbugs we deal with,” he said. “It’s very important that we can kill them effectively.”

Still, some processes aren’t using any chemicals at all. “A new wave in the cleaning industry is using no chemicals, just water agitation,” for certain floor- and carpet-cleaning jobs, he said.

Since coming on board at BFMC, Sandomierski and his staff have worked together on a variety of customer-service initiatives. For example, his department includes an Environmental Services Quality Improvement Committee that now meets weekly instead of monthly, reviewing schedules, work flow, and systems; and helping institute changes.

As for the Green Team, “the main purpose is awareness,” he said. “On Earth Day, we had a special celebration; we gave people recycling information and advice on what they could do in their own environments to go green. And we highlighted what the hospital is doing with recycling programs.

“We’re saving energy, too, by doing things like turning lights off; much of the hospital has automatic lights that go off from time to time.” Even adding a “healing garden” in the middle of the hospital courtyard, filled with flowers, takes a natural approach to creating a peaceful, healing environment, he said.

Sandomierski may have come a long way from his college major, even though he still sings and plays guitar with musical groups around the Pioneer Valley in his spare time.

“It’s nice to have a solid job I really love, and to be able to continue with my music as well,” he said. “I have the best of both worlds.”