Uncategorized
February 16, 2015February 16, 2015 HCN Staff 205 Views
Pay now or pay later?
Employers and consumers shopping for health insurance have to ask themselves a version of this question when considering the option known as high-deductible health plans (HDHPs), which offer lower premiums than traditional plans but much higher deductibles, or the expenses that must be paid out of pocket before the plan begins footing the bills.
HDHPs typically feature deductibles exceeding $1,200 for individuals or $2,400 for families — often by a lot. In fact, according to the 2014 Employer Benefits Survey conducted by the Kaiser Family Foundation Health Research & Educational Trust, the average deductible for individual coverage paired with a health savings account is $2,098, but 18{06cf2b9696b159f874511d23dbc893eb1ac83014175ed30550cfff22781411e5} of workers have a deductible of $3,000 or more. For family coverage, deductibles average $4,059, with almost one-third topping $5,000.
“This makes for a potentially dramatic shift in patient behavior and thinking,” Leah Binder, president and CEO of the Leapfrog Group, wrote in Harvard Business Review. “In traditional plans, even if you have a deductible, you skim to the section of the bill that says ‘patient responsibility.’ It’s usually a nice, round co-pay like $25 or $50 — the same, predictable amount regardless of which services you received. In contrast, with an HDHP, the whole bill is yours to pay.”
Although HDHPs are not a new idea, Binder explained, they’ve received a jolt of life over the past decade, with George W. Bush’s administration pushing for employers to offer the option, and the Democratic-led Affordable Care Act greatly accelerating the adoption of such plans, as the new state insurance exchanges usually feature high-deductible options.
“The IRS has set up some specific qualifications for what constitutes a qualified high-deductible health plan,” said Jody Gross, vice president of Sales at Health New England. “We have a $2,000 high-deductible health plan for an individual, $4,000 for a family, and the premiums are typically much more affordable.
“In order for it to be a qualified plan,” he added, “by definition, all services need to go toward that deductible, whether it’s an inpatient stay, an office visit, prescription drugs … all services need to go toward that deductible. The exception is preventive services — your annual physical, a mammogram, things like that; the government has a list of items that don’t need to go toward that deductible. Even so, a person pays a lot out of pocket before the plan kicks in.”
Accompanying many HDHPs is a product called a health savings account (HSA), by which a plan enrollee — and, in some cases, his or her employer — contributes money tax-free to an account that can be used to pay healthcare expenses. Any unused balance at the end of the year is not lost, but rolls over into the next year.
High-deductible plans and health savings accounts go hand in hand and are often an effective way for consumers to take more control over their care by forcing them to weigh the actual cost of each treatment, visit, or medication, Gross said. “Health insurance — and healthcare in general — is expensive, so the federal government set these plans up, these health savings accounts, in order to drive people down that continuum of healthcare products.”
Meredith Wise, president of the Employers Assoc. of the NorthEast, said many employers are moving toward HSAs and high-deductible health plans.
“A lot of it is because of the rising premiums,” she noted. “As you look at the deductibles and the maximum out-of-pocket expenses of most plans these days, you’re just about at that high-deductible threshold, so going to high-deductible health plans is an easy move for companies to make.”
Seeking Savings
The national numbers bear out that trend. According to the Kaiser survey, one in five workers had an HDHP in 2013, up from nearly zero in 2006. Meanwhile, half of all firms with more than 5,000 workers now offer HDHPs.
“High-deductible plans are attractive to employers because they get to bear less of the insurance cost. Many economists also like the plans, because they’re supposed to make people spend more wisely on their healthcare,” noted Jason Millman in the Washington Post.
“The big question is whether employees are prepared to handle potentially big medical bills before they hit their deductible,” he continued, noting that enrollees in employer insurance typically say they’re happy with the services their health plans cover, “but they’re much less satisfied with what they’re paying out of their own pockets.”
That caution seems to be more prevalent in Massachusetts, Gross said.
“At Health New England, 5{06cf2b9696b159f874511d23dbc893eb1ac83014175ed30550cfff22781411e5} to 6{06cf2b9696b159f874511d23dbc893eb1ac83014175ed30550cfff22781411e5} of our membership is on high-deductible health plans,” he told HCN. “In Western Mass., they haven’t taken off like wildfire. They may shortly, but they haven’t yet, because so many services go toward the deductible, and people aren’t willing to pay a lot less in monthly premiums to have all their prescription drugs and everything else go toward that deductible.”
Wise noted that Massachusetts was initially slow to approve HDHPs. “I think, when high-deductible health plans came out, the Division of Insurance was reluctant to approve a lot of them because of the concern over what the out-of-pocket costs could be for the workforce and people in the state, so they dragged their feet on allowing those to happen.”
But that’s changing, Gross said, noting that two or three years ago, high-deductible plans accounted for only 3{06cf2b9696b159f874511d23dbc893eb1ac83014175ed30550cfff22781411e5} of Health New England’s offerings, about half what they are today. And a year or two from now, he expects the figure to be closer to 10{06cf2b9696b159f874511d23dbc893eb1ac83014175ed30550cfff22781411e5} or 12{06cf2b9696b159f874511d23dbc893eb1ac83014175ed30550cfff22781411e5}. “I do see high-deductible plans gaining more steam. 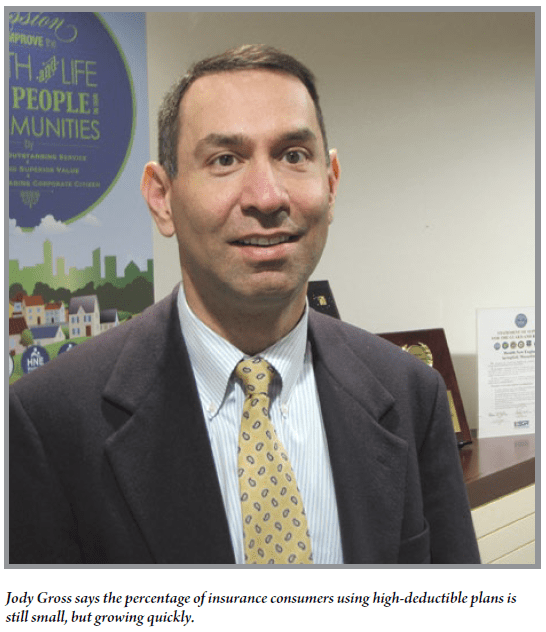 “I think employers are trying to partner with health-insurance plans to find affordable solutions,” he added. “Healthcare is expensive, and there are a lot of expensive medications out there. We all want the latest technologies, but those are expensive too. One way to think about these costs is to share them with individuals.”
In this way, he explained, HDHPs and HSAs fall under the broad category of consumer-directed health plans, which require patients to become much more actively involved in their own care because they’re always acutely aware of what it costs.
“They’re thinking, ‘do I need this service? Are there alternatives? Take prescription drugs, for example; people get tied into thinking, ‘I need this brand-name medicine.’ But if they engage in a conversation with their doctor about generic alternatives, maybe a generic will work in their situation. Another example would be someone with back problems. Do they go right in for surgery, or are there alternative therapies or physical therapy that might be effective? It’s really the consumer driving their own care.”
Employers might be moving toward high-deductible plans partly out of anxiety over the so-called ‘Cadillac tax,’ set to take effect in 2018, that will impose a 40{06cf2b9696b159f874511d23dbc893eb1ac83014175ed30550cfff22781411e5} excise tax on the value of health-insurance benefits that exceed a certain threshold, starting with $10,200 for individuals and $27,500 for families, Binder noted.
“Employers are determined to avoid that tax, but that means slowing growth now or risk blowing the cap by 2018,” she wrote. “Employers used to hesitate to launch unpopular cost-cutting strategies like HDHPs so that they would remain competitive with plans offered by other employers. But pressure from the looming Cadillac tax is felt by all employers equally, so taking a risk on cost-cutting strategies now has less of a competitive disadvantage.”
Wise said the Affordable Care Act, for the most part, hasn’t scared employers, even small companies, off their current health plans, but the Cadillac tax is absolutely a concern.
“I think employers are concerned about the luxury tax coming up,” she said. “If premiums keep going up the way they are, and they would fall under the luxury tax, many of them are going to move to high-deductible health plans.
By All Accounts
At the same time, employers are finding more acceptance of HDHPs among individual consumers because of the combination of lower premiums and the availability of health savings accounts, which offer a number of tax savings, Gross said.
“As an example, I can deduct money from my paycheck and put it into my health savings account tax-free, and that money in the health savings account earns interest — some work like a regular bank account, and with others, you can invest the money. Those earn interest tax-free, and when you spend money [from the HSA] on qualified medical expenses, your payment is tax-free. That’s three ways, from a tax perspective, to save money.”
For consumers who don’t like being hit in the wallet for every single doctor visit and prescription up to their deductible, Health New England offers a hybrid plan — part of its “essential-products suite,” as Gross called it — that features lower premiums and higher deductibles (anywhere from $500 to $2,000) than traditional plans, but covers regular office visits and prescription drugs from the outset. “Because it’s not a qualified plan, you can’t have a health savings account with it, but people are migrating there; 30-40{06cf2b9696b159f874511d23dbc893eb1ac83014175ed30550cfff22781411e5} of our business is in our essential-products suite.”
Gross uses a qualified HDHP and a health savings account himself and appreciates the flexibility it offers, he said. “I put money into it from my paycheck, and I use it as a way to save some money tax-free. I’ve used the savings account to pay for medical expenses — when I went to the doctor, instead of a co-pay out of pocket, I ran my card and paid the whole bill.”
These accounts are owned solely by the individual, and unfortunately, most employers choose not to contribute to them, he noted.
“Some employers, a small percentage, may put money into health savings accounts to help employees get started,” he said. “But the majority aren’t doing that.”
Companies, in fact, are more likely to opt for health reimbursement accounts, which the employer owns, and are typically a use-it-or-lose-it proposition; “if the person doesn’t use the health reimbursement account, the money goes back to the employer.”
Wise agreed. “Companies are moving to replace the HSAs, and many of the employers are not contributing to them,” she said.
In short, employers are no different from individual consumers when it comes to seeking healthcare savings. And with high-deductible plans gaining acceptance against a backdrop of rising premiums for traditional plans, that trend looks likely to continue for the foreseeable future.
And that, for better or worse, puts the onus on patients to make decisions that are healthy for both their bodies and their bank accounts.
Share This Post:

Going to Sleep Depending On Their Age, Children Perceive Anesthesia In Different Ways