Uncategorized
February 16, 2015February 16, 2015 HCN Staff 1125 Views
Noble Hospital is far from the largest facility in the nation — or even the state — but it’s leading the pack in technological advancements. Thanks to the efforts of Dr. Ira Schmelkin, a gastroenterologist at Noble, the hospital has joined nine others across the country in the launch of a revolutionary life-saving modality.
We’re all advised to have a colonoscopy once we reach the age of 50, but for about 4{06cf2b9696b159f874511d23dbc893eb1ac83014175ed30550cfff22781411e5} of Americans who have the procedure performed, the results are incomplete.
There isn’t a complicated scientific explanation for these unfinished colonoscopies, explained Schmelkin. It’s just the way some people’s internal configurations work, where certain twists and turns in the colon don’t allow the scope to examine the entire region.
But these difficult-to-explore sections of the colon, though small, are often inhabited by polyps that could develop into cancer. And colon cancer remains the second-most-common cancer among non-smokers, in part because people receive incomplete colonoscopies or elect to avoid the procedure altogether.
“If you don’t see the whole colon, you could very easily miss the cancer. It’s critical that you look at the entire colon,” said Schmelkin, who attended the State University of New York at Buffalo and completed his fellowship at Mount Sinai Medical Center in New York City.
Determined to save lives by ensuring that everyone is provided an opportunity to have a complete colorectal examination, researchers at Given Imaging introduced a groundbreaking purpose for a technology that had been around since 2001. Given Imaging, the company that created the original PillCam, later developed and tested PillCam Colon, which was recently approved by the U.S. Food and Drug Administration for individuals with incomplete colonoscopy results.
Schmelkin, who previously lived and practiced medicine in New York before taking the position with Noble Hospital almost three years ago, worked alongside Given’s researchers throughout the development and testing phases for PillCam Colon. With an extensive knowledge of how the technology works, he not only uses it to benefit his patients but also familiarizes other area gastroenterologists with the process.
“I love being involved with new technology and teaching people about it,” he said.
Focused on both the application and advancement of the technology, doctors like Schmelkin will play a vital role in its next stages of development. It’s all about implementing the latest techniques and procedures that save lives, doctors agree, and within five years, PillCam Colon is expected to be used at facilities across the country.
Easy Pill to Swallow
Back in November, Schmelkin began offering PillCam Colon to his patients. Because the FDA approved the use of the technology explicitly for individuals with incomplete colonoscopy results, Schmelkin and his staff have performed the procedure for only five patients.
So far, their reactions to the new technology have been glowing.
“They love it,” Schmelkin told HCN after providing a crash course on the technology, from its intricate components to the areas of the digestive system it examines. “The concept of capsule endoscopy has been around for a while, but this pill is designed for a specific purpose. This is a non-invasive way of looking at the colon.”
In fact, PillCam Colon is such a non-invasive option that patients do not feel the slightest discomfort during the digestive process. Utilizing an ingestible and disposable capsule that contains a miniature camera, the technology allows images of patients’ colons to be wirelessly transmitted to a data recorder and later downloaded to a computer.
About eight hours after a patient ingests a PillCam Colon capsule, which takes between four and 35 photographs per second, images of the patient’s colon can be reviewed by doctors. And because the camera is constantly taking pictures, doctors receive detailed images of the colon as the pill passes naturally through the digestive system.
“It’s a double-headed capsule, so it can take far more photos per second,” said Schmelkin, who also serves as a technology trainer for Covidien, the company that recently completed an acquisition of Given Imaging following a nearly 1,000-patient clinical study of PillCam Colon’s accuracy and safety.
For patients, the process is far less stressful than a colonoscopy or alternative options designed for patients with incomplete colonoscopies. In fact, all patients have to do is swallow the pill and then wear a specialized belt for eight hours to enable the images to be registered on a recorder. A laxative is used to accelerate the digestion process, and the images are later transferred to Schmelkin’s computer for careful analysis.
Best of all, there is no sedation or radiation required, only the ingestion of the pill. Moreover, the capsule is passed with a bowel movement and does not need to be retrieved to collect the images from the exam.
“This is a very valuable tool for us. It’s exciting to be able to offer cutting-edge technology here in a small, community-based practice like this,” Schmelkin said.
With LED lights blinking at both ends, the pill looks less like an ingestible capsule than something out of a science fiction movie. The lights, Schmelkin said, are designed to illuminate the dark passageways of the colon and offer optimal visualization during the exam.
This is certainly the stuff of science, but there’s nothing fictional about it. The technology will offer definitive answers for 750,000 Americans whose colonoscopies are incomplete each year. For many of them, the information gathered by PillCam Colon will arm doctors with the knowledge needed to identify potentially life-threatening problems.
A Picture’s Worth
They say a picture is worth a thousand words. But for patients using PillCam Colon, each image captured by the technology might be the image that determines if future actions are needed, whereas in the past these unexamined sections of the colon have caused severe, sometimes deadly problems. 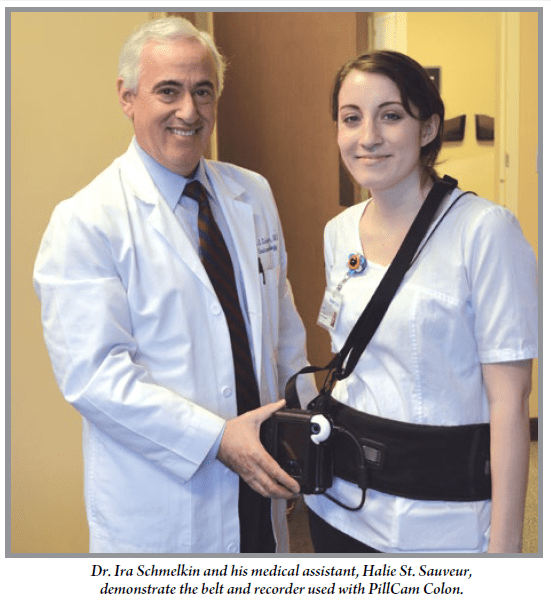 Not only will PillCam Colon provide concrete information on difficult-to-reach areas of the colon Schmelkin referred to as “no man’s land,” it will also deliver a significant cost savings for patients. Before the launch of the new technology, patients with incomplete colonoscopies were often charged additional fees for subsequent procedures intended to complete the examination.
Now, with the emergence of PillCam Colon, patients can rely on increased accuracy at a lower cost than alternative procedures.
Of course, as is the case with all medical exams, insurance companies will dictate how quickly the technology penetrates the market. The cost of the exam is currently $2,500 at Noble, and insurance coverage will play a major role in the affordability of the technology going forward.
Still, Schmelkin doesn’t think it will be very long before PillCam Colon establishes national prevalence. The technology has already enjoyed widespread use in Europe, Japan, and Israel (where Given Imaging is headquartered).
“I anticipate all academic hospitals using it, then most GI practices within about five years,” said Schmelkin, who also predicts that the FDA will eventually approve the exam for individuals who are too sick for a colonoscopy or afraid to have the procedure done. “It’s definitely a life-saving tool that will find cancers almost as well as a colonoscopy.”
Schmelkin emphasized that the technology is not a viable replacement for a colonoscopy — if a polyp is discovered, the pill is not capable of mitigating or removing it. Instead, PillCam Colon is a diagnostic tool, Schmelkin said, designed to give doctors more information.
And the more data doctors possess, the better equipped they are to save lives.
Share This Post: