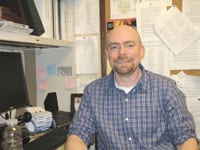 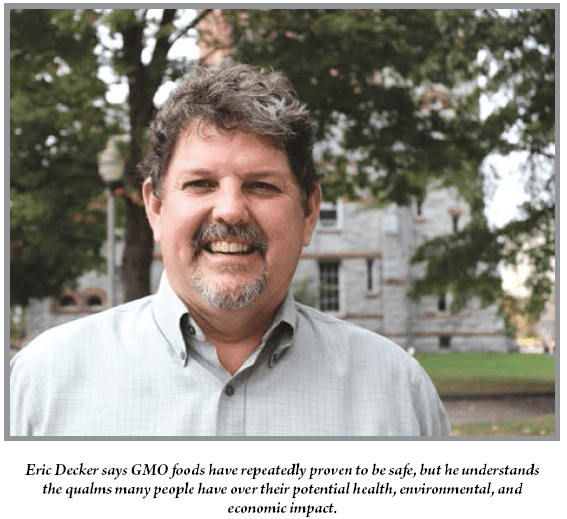 “But I think GMOs are here to stay,” he added. “Next-generation GMOs may offer greater yields and drought resistance, so you can plant in areas where you can’t plant crops now. And there are some good statistics saying pesticides are being taken out of the environment with GMOs.”
Pros and Cons
Wood acknowledged that many of the scientists behind GMO technology are acting with the world’s good in mind.
“We’ve been eating GMO products for 20 years, and I don’t think anyone ever intended negative consequences,” he said. “I think what we have are innovative folks trying to solve some real problems, and along with the solutions come some consequences. But the issue is, we don’t really know about some of those consequences yet. As I say in class, we’re kind of all human guinea pigs in this experiment.”
For example, “if climate change is a real thing, and let’s say more droughts are in front of us, what if a scientist can create a seed for crops that can resist drought? If climate change is a real problem that needs facing, that scientist has done a lot to help us. On the other hand, when you manipulate what that seed would normally do, you are manipulating the chemical composition of what’s going into the body, and that has a direct interaction with the human microbiome.”
One major issue for people concerned about GMO foods is clearer labeling of products in supermarkets. They are encouraged on that front by recent legislative developments, such as the decision of U.S. lawmakers last September not to renew a provision of agricultural law known colloquially as the ‘Monsanto protection act,’ which protected seed producers from liability if their products are found to be harmful.
“Labeling of this has become the new big issue,” Wood said, before asking rhetorically why Monsanto and others are spending so much money to prevent people from knowing what’s in their food. “They’d probably say they’re protecting their intellectual property, but I don’t know.”
Nathaniel Johnson, the grist.org writer who interviewed the Cornell plant breeder, takes a balanced approach to the GMO controversy.
“Those of us who are suspicious of genetically engineered foods need to be thoughtful, too,” he writes. “I still think that we have an important role to play in making sure the technology isn’t used inappropriately. But it’s not useful to flail blindly against something we don’t understand.”
Wood takes the same thoughtful approach. “It’s more about us being aware of what’s going on,” he told HCN. “The way I look at it, these aren’t intended consequences. And if they exist, scientists aren’t looking to cause problems; they’re trying to solve them.”
But those good intentions do nothing to minimize the concerns he has with what Americans are — unknowingly, in many cases — sending into their collective gut.
“If you eat like crap now, it’s not like eating like crap 20 or 30 years ago,” he said. “People say, ‘I ate junk as a kid; it’s no different.’ But it’s not the same crap. The stuff it’s made up of is not the same.”
Share This Post: 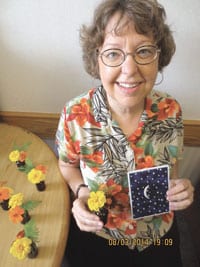