She was referring to pending changes at the alcohol and drug detoxification centers operated by Baystate Health System in Springfield and Greenfield. Prompted by state budget cuts, these changes will force discontinuation of most detox services at Franklin Medical Center and eliminate some residential services for patients in Springfield. As a result, administrators will have to rely more on what’s known as an intensive outpatient program (IOP) to treat detox patients.

“We’re not sure how this is going to impact our patients,” said Hopkins-Alexiadis, director of Behavioral Health Services and Neurosciences for the Baystate system. “It’s a situation we’ll be monitoring closely … we’re essentially changing our model of care.”

The phrase ‘new territory’ may be applied to more than behavioral health services, however, as Baystate and other hospitals across the Commonwealth grapple with reductions in Medicaid and announce cuts to a number of health and human services programs. In one of the most visible steps taken in response to those cuts, Baystate has announced changes that will result in the loss of 119 jobs across the Pioneer Valley.

In addition to the changes in the detox programs in Springfield and Greenfield, Baystate announced the discontinuation of services at 10 school-based health centers in Greater Springfield, as well as cutbacks to selected outpatient behavioral health services at Franklin Medical Center.

“Recent cuts in Medicaid payments and the elimination of MassHealth Basic, especially in the areas of behavioral health, have forced us to make changes to our current behavioral health treatment models,” said Mark Tolosky, president of Baystate Health System and CEO of Baystate Medical Center. “The elimina-tion of state support for our school-based health centers has also forced us to close these centers, effective April 30.”

Tolosky described the cutbacks as regrettable, but necessary, and said they will undoubtedly affect people in the communities served by the system. “These are changes that Baystate has been compelled to adopt in response to the fiscal crisis in health care and to ensure the continuation of other services that benefit all residents of our communities.

The Healthcare News looks this month at the steps being taken within the Baystate system, and how they might be a harbinger of things to come given the Commonwealth’s budget deficit and the already fragile condition of hospitals across the state.

The steps being taken at Baystate provide evidence of that phenomenon, he said, although the hospital is trying to minimize the eventual impact.

Recent cuts in Medicaid have led to changes at the Carlson Recovery Center in Springfield and, especially, the Beacon Recovery Center in Greenfield, both behavioral health facilities, said Hopkins-Alexiadis. At Carlson, so-called “level B” services for detox patients — a several-day acute residential program — will be eliminated, she said, while at Beacon, both the level B services and emergency detox care (level A) will be eliminated. As a result, Carlson will be downsized from 64 beds to 30, and Beacon will essentially be consolidated into Carlson. Detox services provided at Beacon will be discontinued on May 9, and patients will not be accepted after May 2.

The reductions will result in the loss of about 60 jobs at the two facilities.

Hopkins-Alexiadis said that, as a result of the cutbacks, Carlson will now rely more heavily on a model now being used in many other detox facilities across the state, one that follows up the emergency detox treatment (a three- or four-day inpatient course of care) with outpatient services that could run for several weeks.
This IOP program does have some benefits, including the fact that patients return to home and work more quickly. However, because the patients are not in an inpatient setting, there is perhaps a greater chance for a relapse.

“For the number of years that we’ve had these programs, we’ve had both level A and level B,” Hopkins-Alexiadis said. “We have concerns that people might be at greater risk for a relapse, so we’ll be watching this closely and hoping for the best.”

Hopkins-Alexiadis said a care model based on level A services followed up with IOP has been in use across the state, and generally with good results.

“In the eastern part of the state, most medical hospitals or free-standing treatment centers have operated using just level A and intensive outpatient, along with other services within the community — they haven’t had level B,” she explained. “They’ve been able to operate with those services and work with community resources to treat people. We’re part of a large network of providers, and we’ll be connecting with our counterparts in other areas of the state and hopefully gaining some insight into how their systems have worked. It will be a change for us.”

Changes will also be coming to the treatment provided many area schoolchildren, following the elimination of state support for school-based health centers. Baystate currently operates 10 such facilities, nine in Springfield and one at East Longmeadow High School, said Barbara Farrell, ambulatory grants manager at Baystate and practice manager for the school-based health centers.

She told The Healthcare News that funding for the facilities, which act as small urgent-care centers, has been eliminated for the rest of this school year — cutting 17 full-time and many part-time positions — and the status of the program for next September remains a large question mark.

Each center is staffed by a nurse practitioner, she explained, and acts in many ways like an on-site emergency department. Students with problems ranging from pinkeye to asthma attacks can be treated at the center and often returned to the classroom, eliminating the need to send students home and force parents to leave work.

“They’ve been a tremendous benefit for the community,” she said, noting that there are about 70 centers across the state, each funded for about $80,000 per year. “These centers can provide intervention that often prevents small problems from becoming bigger problems, and with them, students lose less time in the classroom and parents lose less time at work.”

If the centers remain closed, the burden will fall on the region’s already overtaxed emergency rooms, said Farrell, adding that, like many programs currently facing the budget ax, the school-based centers relieve pressure on the health care system and provide services in a more cost-effective manner than existing alternatives.
But at a time when the state must close a $3 billion budget deficit, common sense often loses out to short-term remedies to budget woes, said Tolosky.

Farrell called the school-based health centers a “safety net,” especially for the children of low-income individuals in Springfield and other urban areas who may not have easy access to a primary-care physician.

The state’s budget crisis will inevitably cut many such safety nets, she said, holding out some small hope that the Legislature will find a way to fund the school program and others, like the detox services, that impact quality of life in a community.

Said Hopkins-Alexiadis, “given the huge fiscal emergency the state is facing, we really don’t know what to expect. We would hope that our area has been impacted enough, but we don’t know.”

As she said, Baystate and the rest of the state’s health care providers are in ‘new territory.’ 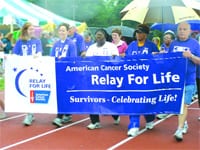