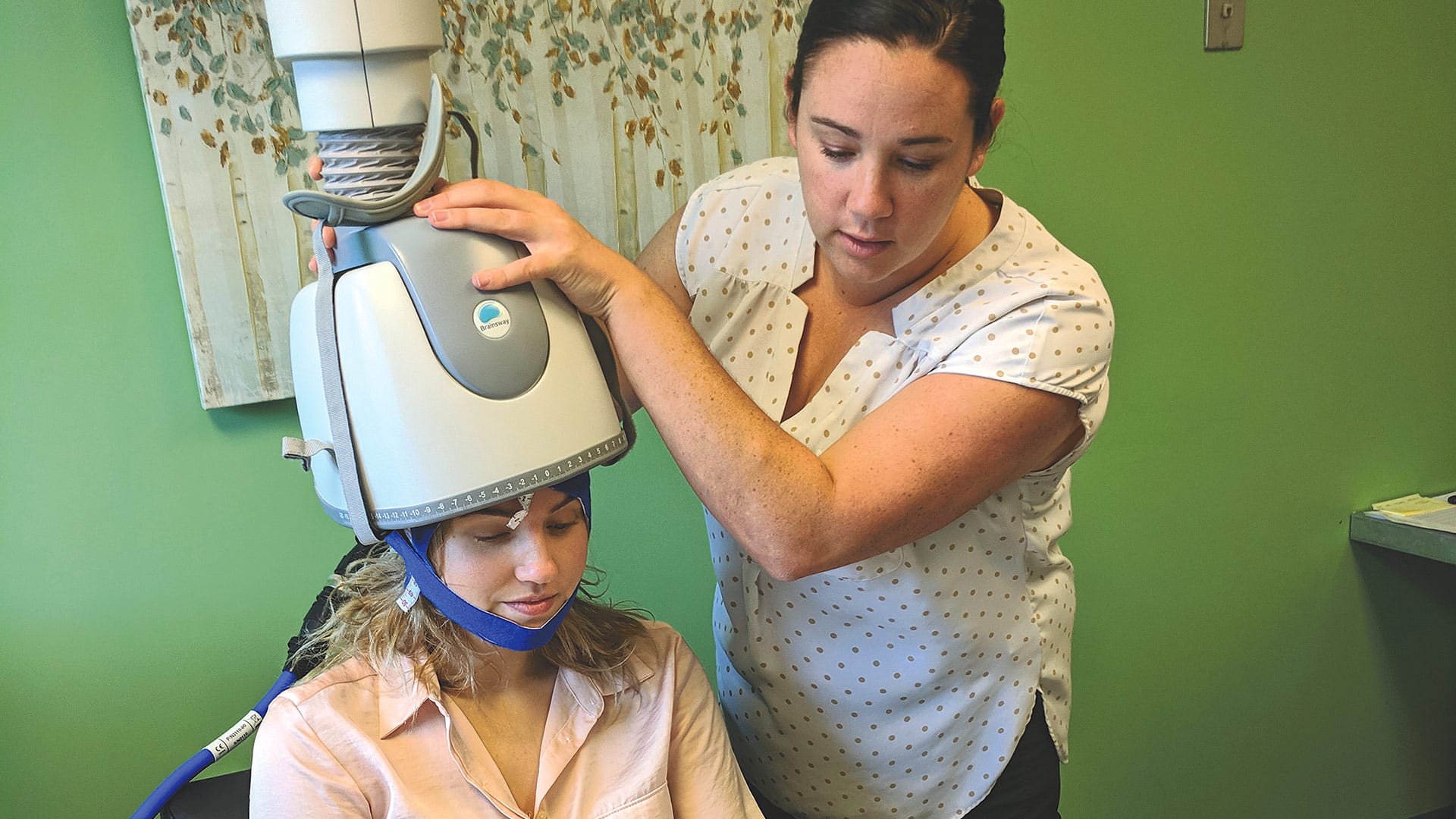 Uncategorized
September 16, 2018September 18, 2018 HCN Staff 1398 Views
Margie Pierce understands the difficulty — and, yet, the importance — of tackling the problem of depression.
“It’s the leading cause of disability worldwide right now,” said Pierce, a licensed clinical social worker and director of operations at Achieve TMS East, a fast-growing chain of behavioral-health practices that employ an innovative approach to treating depression known as deep transcranial magnetic stimulation, or dTMS.
“We’ve had people who were chronically depressed for 20 years have a fabulous response to this, and we’ve had people chronically depressed who have not had a great response,” she told HCN. “We can’t pigeonhole people when they come in, whether they’re going to respond or you’re not. It’s kind of hit or miss, just like with medications. Some people respond to certain medications, and others don’t.”
That said, however, dTMS has proven remarkably effective in most people who undergo it — in many cases, people who have tried a seemingly endless string of medications and therapies with little success. That explains why the organization has grown to 11 offices across Western Mass., with broader geographic expansion planned.
Deep transcranial magnetic stimulation, or dTMS, is a non-invasive technique that applies a series of brief magnetic pulses to the brain, by passing high currents through an electromagnetic coil placed adjacent to a patient’s scalp. The pulses induce an electric field in the underlying brain tissue and activates underactive areas in the brain associated with depression.

Dr. John Zebrun, senior medical officer with Achieve TMS East, said transcranial magnetic stimulation (TMS) was developed in Europe in the 1990s, and the first machine to receive FDA approval in the U.S. was the Neurostar machine, in 2008, which reached two to three centimeters into the brain, unlike dTMS — developed by an Israeli company called BrainsWay — which reaches six to seven centimeters in, and earned FDA approval in 2013.

“It enables you to get deeper into the brain tissue, so the volume of brain tissue is larger,” Zebrun told HCN. “We don’t miss the target, ever, and there’s more stimulation in that area.”
The developers of the original TMS technique, he explained, wanted to discover if there were circuits or networks in the brain tissue they could stimulate to ease clinical depression. They targeted the left prefrontal area, which imaging scans suggested were underactive in patients with depression.
“The thought was to stimulate that area first and get it closer to a normal activity level, and that would help with depression — and it did. And that still is the primary target,” he said, noting that the device produces a magnetic field, not an electric current. “It’s getting groups of neurons in the circuit to fire together. As they get used to firing together, they’re more connected to each other.”
After a standard treatment of 36 sessions, he went on, those neurons become trained to fire normally. Treatment statistics show that 51{06cf2b9696b159f874511d23dbc893eb1ac83014175ed30550cfff22781411e5} of patients who undergo the entire protocol get all the way to remission, while 75{06cf2b9696b159f874511d23dbc893eb1ac83014175ed30550cfff22781411e5} get at least halfway to their goal. About one-third will need repeat, ‘booster’ treatments down the road, while two-thirds don’t.
In short, those are great numbers for a depression treatment, Zebrun said, and that success explains why Achieve has grown so rapidly across the region — and promises to become a more widely known name across the Northeast.
Long Time Coming
The breakthrough in TMS occurred in 1995, Zebrun said; that was when researchers first demonstrated that a magnetic field could stimulate the right neurons and get a response.
“So it’s been around a long time,” he said. “It varies from machine to machine, but they’re all operating within a certain range and certain power level to get the antidepressant effects.”
FDA approval was only one key development, however; insurances companies still needed to pay for the treatment if doctors hoped to reach a wide market. Medicare accepted it in 2015, and other payers soon came on board.
The FDA originally approved TMS for patients who had failed to find relief with another antidepressant treatment. “But insurance companies added extra layers, expecting to see about four medication and psychotherapy trials before they give this approval,” Zebrun said. “But a lot of people out there have already been through years of treatment and tried several medications.”
Dr. Thomas Bombardier, an ophthalmologist turned businessman, was involved with launching a chain of Achieve TMS businesses in California, Pierce told HCN, and when he saw the benefits and how patients were responding out west, he decided to bring the model to his Western Mass. stomping grounds, teaming with two other owners to open Achieve TMS East.

Patients are referred to Achieve by their primary-care doctors, therapists, and psychiatrists, and some self-refer after hearing about the practice through social media or friends or family members.

“We’re very open to however they can get into the door to get the help they need,” Pierce said, noting that, while the majority of people who seek out tDMS are good candidates for it, some aren’t, due to medical contraindications, recent seizures, or even metal in the head that could heat up during the treatment. Everyone also gets a psychiatric consult to see if the treatment will be appropriate.
Stacey Kronenberg, operations manager at Achieve TMS East, demonstrated the dTMS technique for HCN on Sara Pittman, a technician with the practice, although at a very low power level. Pittman put on a soft cap followed by the dTMS helmet, and Kronenberg set the device to a single-pulse mode, moving centimeter by centimeter until she found the motor area for Pittman’s hand, which twitched. From this process of ‘mapping,’ she could locate the right area to target for treatment.
The power setting isn’t uniform for each patient, and can be altered by the thickness of the skull, how much sleep the patient got the night before, even how much coffee they drank that morning. The process involves 36 ‘taps’ in two seconds as the neurons are stimulated, followed by a 20-second break, then another 36 taps in two seconds, then a 20-second break — a cycle repeated 55 times, totaling just over 20 minutes.
Initial treatments are run at lower power than later treatments to desensitize the patient to the sensation, which Pittman described as more of an annoyance — like a woodpecker tapping at her head — than anything. “It’s a tolerable discomfort,” Zebrun added. “I wouldn’t say it’s a breeze, but it’s tolerable.”
Some patients pass the time by chatting with the technician, while others choose something to watch on Netflix, on the big TV hung on the wall beside the treatment chair.
“A lot of people, at the end, are like, ‘oh, I’m done already?’ They’re enjoying their conversation or their show,” Kronenberg said. “I think we should work for Netflix. A lot of people come in and are like, ‘I want to get Netflix.’”
That’s because they’re at the office often enough to binge a lot of TV — five days a week for six weeks, in fact, which is how long it takes to train the brain. “A lot of patients don’t want to leave when it comes to the end of their treatment,” she said. They tell us, “I’m so used to coming and seeing you. Who can I talk to now?’”
Beyond Depression
For starters, they can talk to their loved ones, in most cases, about how effective the treatment was. And depression isn’t the only use for dTMS. The FDA recently approved it as a treatment for obsessive compulsive disorder. In fact, dTMS has been successful in trials for OCD in ways that traditional TMS cannot be, because the target area of the brain is deeper than for depression.
“The surface coils [of TMS] would need so much energy to get that deep, it would hurt. The surface area would get too much stimulation rather than area you’re targeting, and you’d risk a seizure. That wouldn’t happen with dTMS,” Zebrun explained.
He said he hopes to reach people who don’t find standard cognitive treatment for OCD effective. “It can devastate one’s life. You can get wound up into some of these compulsions, or your mind can be so caught up and obsessed with obsessive thinking that you can’t focus on anything else. You can’t get through a planned project because there’s too many interruptions from your loops of thought that come in. There’s a wide range of those obsessions and compulsions.”
Even milder symptoms of OCD can really bother people, he added. “They wish they could get rid of these images popping into their head that started from nowhere and have no relation to anything in their lives and are disturbing to them.”
Kronenberg also hopes dTMS makes an impact on the lives of these patients, noting that OCD is one of the most thorny issues that therapists tackle. And, much like depression, she added, OCD can be a “hidden” disease because there’s some stigma and shame associated with it.
But there shouldn’t be, Zebrun said, especially when something like dTMS exists, with its strong track record and its minimal side effects, which may include facial muscle contractions and headaches, which are both temporary. Fewer than one patient in 1,000 may experience a seizure — a risk similar to that of taking an antidepressant medication at the maximum dose.
Because it’s tolerable, he added, patients can do it before or after work, or during their lunch break, and return to their normal activities.
And maybe a normal life.
“People who for 20 years were depressed say it’s life-changing for them,” said Anita Taylor, marketing director at Achieve TMS East. “When we hear those kind of stories, we’ll ask them, ‘what would you say to someone thinking about this?’ They’ll say, ‘why wouldn’t you try this? What do you have to lose, except maybe your depression?’ It’s worth it to give it a try, go in wholeheartedly, and, for most people, it’s going to help.”
Share This Post: