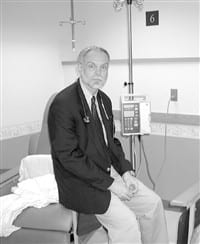 Dr. Wilson Mertens stressed repeatedly that the Center for Cancer Care that will soon take shape on Baystate Medical Center’s campus on Main Street in Springfield is not a building. Instead, it is a new way of thinking about cancer treatment.
Indeed, when asked if there was a model for the $39 million venture or a facility that was already providing care in the way this center ultimately will, Mertens, Baystate’s medical director of Cancer Services, thought about it for a minute and said ‘no.’ “People are attempting to do it,” he explained. “But no one that I know of, in this country, at least, is there yet.”

‘There,’ as Mertens described it for The Healthcare News, is a place where cancer care is truly integrated in a patient-centered environment where schedules can be coordinated so patients can see several specialists in a span of minutes, not hours or days.

Using a number of focus groups, Baystate set out to determine what patients and their families liked and disliked about cancer treatment — both at Baystate and in general — and went about designing a facility that kept what worked and addressed what didn’t, said Mertens.

“We got a lot of groups together, including various oncology specialists, technologists, nurses who work in a variety of areas, office people, and community activists, and essentially asked them, ‘if we had cancer ourselves, or a family member did, what kind of program would we want to go to, and how would we want it to feel?’” he explained. Using the answers that came back, those involved with conceptualizing the center came up with a theme that was continually tested against the evolving design of the facility. The result is a center that essentially compresses time and space, he said, setting new standards for convenience in the process.

The Healthcare News looks this month at how the plan for the facility came together and what the region can look forward to when the center opens its doors in early 2004.

Baystate broke ground for the 65,000-square-foot, three-story cancer center on May 13. It was a day for speeches and ceremonial shovels of dirt. But work on the center actually began years ago, with the realization that existing facilities at Baystate would not be able to serve the medical center or its patients in the future, said Baystate President Mark Tolosky.

Specifically, one piece of equipment critical to cancer treatment is approaching the end of its its useful life, Tolosky said, and the prospect of putting its replacement in the basement of a half-century-old building was not an attractive option.

So the decision was made to build a new cancer center, not merely to house equipment such as a new $2.7 million linear accelerator, but to change the way cancer treatment is delivered. And Mertens, who was hired in part to develop the concept and bring it to fruition, began to add details to what was then a blank canvas.

Actually, he had a lot of help in that process — from people who deliver cancer treatment services, the people who receive them, and groups that represent both constituencies. And as various needs were addressed in the design stage of the project, they were looked at with the same overriding question, said Mertens: “How does this help the patient; how does this make care better?”

Using this common denominator, those blueprinting the center addressed everything from the location of administrative offices to lighting in clinical exam areas, from diversions for patients and their families to the layout of the hallways.

In many ways, cancer treatment is about relationships between the patient and those who design a system of treatment, said Mertens, adding that the new center has been designed to enhance those relationships.

“Cancer treatment is usually not a one-shot deal,” he explained. “There is always follow-up, treatment is often prolonged, and sometimes treatment is not successful in eradicating the cancer. It’s a process over time, during which our relationships evolve and the patient evolves.

The result is a facility that is integrated and truly functional, he continued, but not broken down into traditional departments or divisions. Instead of setting aside a space for radiation oncology, for example, those designing the facility would address the needs of those specialists in the context of treating patients.

This multi-disciplinary aspect of the center is unique to this country, said Mertens, adding that it has been tried, with some success, in Europe and Canada.

Through the use of several focus groups, Baystate administrators learned that patients generally liked the care they received and the relationships they forged with care providers, but thought there was room for improvement with regard to how that care was administered, said Michael Daly, president and CEO of Baystate Health System.

Specifically, patients didn’t like the way facilities were spread out, he said, nor did they like having to schedule several appointments to see various specialists. Thus, the center was designed with the goal of setting new standards for convenience or, as Mertens put it, taking much of the “hassle” out of cancer treatment.

“When patients come to receive care, they have to be viewed as part of a team,” he said. “The problem is, other members of that team are separated by time and space. People are in different buildings, appointments are at different times … it’s a very user-unfriendly situation.”

At the new center, patients will be able to see a radiation oncologist and a medical oncologist at the same time, he said, reducing the number of visits and the accelerating the course of treatment in the process.

“We’re looking at an integrated computer scheduling system that will schedule all functions within the building,” he said. “At a glance, we can see where patients are, when the next treatment is, how many treatments they have left, and whether there have been any interruptions in those treatments.”

The software exists to do such integrated scheduling now, Mertens explained, but until the various cancer-treatment facilities at Baystate are brought under one roof, it isn’t possible to implement such a system.

While taking some of the hassle out of the cancer treatment equation, those designing the new facility also sought to remove some of the fear and apprehension that are part of the process. As a result, the new facility is friendlier, said Mertens, and in a number of ways.

Each floor of the facility has windows, for example, he said, and there will be an abundance of natural light throughout the facility. Meanwhile, patients and their families will have many diversions beyond a TV set in the corner of a waiting room, he said.

Indeed, the new facility will have a game room, and patients will have the chance to watch movies (with headphones, so as not to distract others), either from their own collection or from a library at the center.

Also, patient areas and administrative offices will be segregated, said Mertens, in another attempt to relieve some of the stress that accompanies cancer treatment. “This will be a place of calm, not hustle and bustle.”

When conceptualizing the new cancer center, Mertens and his staff visited several cancer centers around the country. While they came away with some good ideas, more often they gained insight into what not to do.

“We asked people what they would have done differently if they had the chance,” he said. “People were very candid in their answers, and that really helped us.”

For a period of time — no one is really sure how long — the new cancer center should represent state-of-the-art in cancer treatment, said Daly, who told The Healthcare News that this will help the system draw patients from a wider area than it currently does.

“This will be the place to go,” he said, stressing again that while the new facility should help the system become more competitive with cancer centers in Boston and other urban areas, the main beneficiary will be patients.

“It’s been designed for them and with their input,” he said, “and that’s why it’s much more than just a building.” 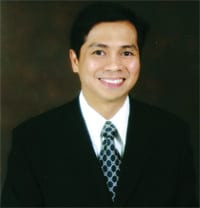