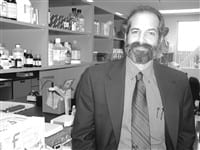 When asked what role the new biomedical research center in Springfield would take in the developing field of biotechnology — and in regional economic development efforts — Larry Schwartz said it is “still evolving.”

And it will be doing so for some time, said Schwartz, the institute’s scientific director, because this facility is, in a word, unique, and in time it will play several roles, including many that traditional research centers cannot.

Like a blank canvas, the center, known officially as the Baystate Medical Center-University of Massachusetts-Amherst Biomedical Research Center, stands ready to assume colors and shapes, said Schwartz. In the year ahead, the mission of the facility — still a mystery to many residents in the area — will gain more clarity.

He said the $92 million facility, which will also include a $60 million life sciences building to be constructed at UMass, could take a lead role in research on specific diseases and drugs to treat them, assist in the development of new medical technology, and become an incubator for fledgling biotech companies that could someday become major employers in the Pioneer Valley. The likelihood is that it will be all three — and more.That’s because the unique affiliation between UMass and Baystate gives the institute access to a wide range of resources, everything from the nationally recognized polymer research at UMass to the patient population at Baystate and the Pioneer Valley.

“We can offer basic research and all the technologies associated with that; we have great clinicians, an intriguing patient population, a city that wants to be as inviting as it can, and space for people,” said Schwartz. “What we don’t have is the mindset of a medical school … and we’re also new and hungry, and we want to make this work.”

The institute, which has been open since earlier this fall, cut the ribbon officially at Nov. 21 ceremonies that featured U.S. Sen. Edward Kennedy; Dr. Elias Zerhouni, director of the National Institutes of Health (NIH); and other dignitaries.

Zerhouni urged those involved with the center to think big and find specific niches within the research universe. “Come up with bright ideas, and we’ll be right there with you,” he said, referring to NIH grants that fuel many of the research projects in the country.

The center was first put on the drawing board in the mid-’90s as a vehicle for tapping into the enormous potential of a biotechnology sector that is still very much in its infancy. The unique partnership between Baystate, UMass, and the city of Springfield brings together not only the region’s two largest employers, but, more importantly, its largest health care facility and institution for higher learning.

And that partnership makes the institute unique, said Schwartz, who told The Healthcare News that most research facilities are based at university medical schools, and thus are limited in their scope. This partnership doesn’t involve UMass Medical School, which is based in Worcester, but it does bring all the science and technology programs at UMass together with the largest teaching hospital in the region.

That gives the center the ability to do things that most research centers can’t, he said, citing the polymer science department at UMass and its ability to assist in the development of new medical and surgical devices as just one example.

Located on Main Street in Springfield in a building that was part of the former American Bosche complex, the institute currently has about 25,000 square feet of space available for lease to developing biotechnology companies. Its first tenant, Biomedical Research Models of Worcester, which will take on about 10,000 square feet, is expected to relocate to the facility next year.

Schwartz said the center offers a number of advantages to startups, starting with its location and, therefore, its price tag. Space can be leased for a fraction of what businesses would pay in Boston and Cambridge, which is saturated with new biotech firms, and even in Worcester, which is developing a biotech sector around the medical school, he said. Also, the institute can offer those smaller companies the attention and assistance they can’t get in Boston.

Meanwhile, the Springfield facility, with its open architecture and shared resources, allows smaller companies access to equipment and technology that wouldn’t be available to them in many settings.

“We’ve got all the toys,” said Schwartz. “Anything that people are looking for, we can put on the table and say, ‘we’ve got it,’ and it’s genuinely available. Essentially, we want to figure out how to best utilize it; we want to get ideas from people, and we want to make this a going concern for the private sector, the hospital, the university, and ultimately for the general public that will benefit from the products and ideas we produce.”

While the specific niches the institute will focus on have not yet been identified, it appears likely that the center will “cast a wide net,” as Schwartz put it, and take advantage of several developing fields within biotechnology.

For example, the center could become an effective site for clinical trial research, especially because its patient population is easier to track than Boston’s.
“Doing clinical trials in Boston is like herding cats,” he explained, “because there are so many medical institutions and a public transportation system to take people to them. One day people can go to Mount Auburn Hospital, and the next day to Beth Israel, and the next day to Mass. General. That makes following a patient population incredibly hard.”

By contrast, Baystate is the predominant care provider in the region, he said, and people generally return to that facility, allowing researchers to easily track the health care given to entire families and even generations of people.

Overall, the biomed institute will seek out specific niches, said Schwartz, but it will also look at a number of opportunities make a name for itself.

“Dr. Zerhouni admonished us to find one thing and be the best in the business at that one thing,” he continued. “He’s right; we do need to distinguish ourselves and identify one or two things we can be leaders in, but at the same time we need to cast the net broadly. This is too good an opportunity for us to limit ourselves.

“If we go ahead and work on medical imaging as what we do, then we leave out the bioengineers,” he continued. “And if we focus on clinical trials research, then we’re going to miss out on the development of new polymers for medical devices.”

As Schwartz said, the institute is hungry and ready to make things work, and 2003 will be a year when the evolutionary process takes some significant steps fo