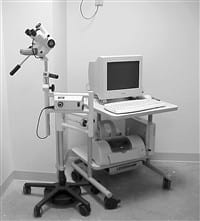 Criminal activity comes in many forms, but the long-term physical and sexual abuse of children, who often suffer for years in silence, is among the most wrenching.
Thanks to modern technology, however, the evidence accumulated over those years can speak today. Specifically, Cooley Dickinson Hospital has unveiled new diagnostic equipment that can detect forensic evidence from victims of child abuse and sexual assault — even the most subtle evidence.
The machine, called a digital colposcope, can, through a non-invasive procedure, document and store digital images of injuries inflicted on a child or adult. Although a few other state hospitals, including Baystate Medical Center in Springfield, use the devices, it is the first of its kind in Hampshire County.

But the colposcope is only one part of the story. The hospital will work directly with the office of Northwestern District Attorney Elizabeth D. Scheibel, which will screen suspected abuse cases throughout Hampshire and Franklin counties and refer them to Cooley Dickinson when warranted. In the past, such medical referrals had to be made in Springfield.

“Given the volume of referrals and the fact that very few facilities perform these exams, prosecutors made tough choices about which cases to refer,” Scheibel said, noting that her office sees more than 400 child-abuse cases each year. “With the digital colposcope located at our community hospital, we anticipate being able to refer many more cases each year to CDH.”

As Dr. Raymond F. Conway, director of the CDH Emergency Department, told The Healthcare News, the digital colposcope is essentially a high-powered, non-invasive microscope that allows the examining physician to evaluate different areas of the body for the subtle signs of abuse.

“It’s something that’s used by gynecologists and obstetricians and sometimes surgeons in the course of their practice, but we’re going to be using it here to evaluate children with suspected or probable sexual assault,” Conway said. “If used appropriately, it picks up some very sensitive kinds of information that can be used to either rule in or rule out certain situations.”

The scope’s multiple magnification settings allow for ideal visualization of genitalia and other areas and can pick up even small signs of sexual abuse, as well as bite marks, burns, and other abuse.

The photographs produced may be reviewed by various practitioners, lessening the need for repeated examinations; when additional procedures are needed, the photos may be compared to detect subtle changes due to trauma. Meanwhile, the photographic documentation can effectively enhance a medical practitioner’s verbal description, making the colposcope a valuable tool in court.

“It’s literally a state-of-the-art microscope with digital documentation, and it’s virtually impossible to alter any of the digital photos,” Conway said. “Each photo is marked in a special way, and if you change any piece of the photo, it’s clear that it has been tampered with. For chain-of-evidence purposes, this is excellent.”

Of course, not all sexual abuse cases in the two-county area end up needing a complete exam, Conway continued. “There’s more than one new case of child abuse reported each day, and the majority center around sexual abuse. The DA’s office, through a very specific medical and legal screening process, is able to cull out the ones that need the exam from the ones that don’t.”

Similarly, not all physicians will need to use the colposcope, Conway added. On June 10, the DA’s office will sponsor a general educational seminar featuring three experts in the technology’s use, and that will be followed by a more intense training session with a small group of doctors who will actually use the device in a private setting in the hospital’s Women’s Health area.

After that, the medical and legal partnership will move into actual cases, bringing to fruition the goals of the hospital’s auxiliary, which donated the $27,000 needed to purchase the colposcope.

“It’s absolutely a positive idea, and the auxiliary thought it would make good sense,” Conway said. “Based on that, they went ahead and raised money for the equipment, training, and setup process.” One-third of those funds were raised at an art auction at CDH in December.

“We recognized the critical need and had funds available to support our community in this fashion,” said Susan A. Meyers, auxiliary president.

And within any community are those who would victimize children, said Scheibel, creating a need for a machine that can uncover the months-old and even years-old signs of abuse that can lead to convictions.

“In essence,” she added, “we are bringing services home to our community in a safe, private, and comforting atmosphere, complete with top-notch medical equipment and clinical expertise to meet victims’ needs.”

Yes, modern technology is helping abuse victims find justice. But more effective teamwork between the region’s top medical and legal officials might be the most important tool of all. 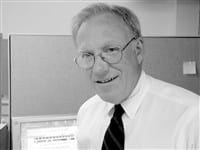