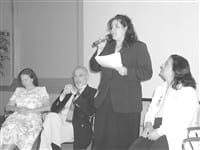 When it comes to menopause, many women want to go ‘natural.’ But what they don’t understand is, there’s nothing natural about menopause at all, said Dr. Oded Renkus.
Renkus, who chairs the Obstetrics and Gynecology Department for RiverBend Medical Group, made more than 100 women laugh — and think — during a menopause seminar at Mercy Medical Center when he suggested that they should not fear estrogen-replacement therapy because of any preoccupation with ‘nature.’

That’s because, 100 years ago, average life expectancy was only about 50, and menopause hardly existed. “We artificially created menopause,” he said, tongue firmly in cheek. “Nature did not intend for you to have a natural life after your reproductive years.”

Of course, he added, many women now see these years, when the children are finally out of the house, as the start of a new life — and for most of them, there’s no reason why they should endure the physical effects of estrogen loss without taking advantage of scientific ways to replace it.

And those effects are numerous, lecture attendees learned from several speakers — but so are strategies for countering them.

Estrogen-replacement therapy is one of those means, reversing the effect of the body’s loss of estrogen at menopause. But by making smart decisions regarding food, nutrition, sex, and even attitude and recreational activities, women can turn what is often a feared moment in their lives into a positive one.

What’s Happening to Me?

Renkus began with the bad news, detailing dozens of physical effects of menopause, many of which drew groans from the audience. Of course, he mentioned hot flashes, or vasomotor flush, which is characterized by reddening of the skin around the head, neck, and chest; a feeling of intense heat; and profuse perspiration.

Urogenital effects can include urethritis, painful urination, and incontinence, as well as vaginal itching, vaginal narrowing (stenosis), and painful intercourse — symptoms that can be eased with vaginal estrogen creams and suppositories, among other treatments. These are important to consider, he said, since most older women say they are still interested in sex or are sexually active.

“Enjoyment of sex for women will depend in large part on the physical changes they undergo,” Renkus said — and these may be altered through daily or cyclical treatments of estrogen. But normal, age-related vaginal atrophy can also be fought simply by staying sexually active. “The phrase, ‘use it or lose it’ applies to the vagina,” he said.

Then there are the psychophysiological effects of menopause, including fatigue, nervousness, headaches, insomnia, depression, dizziness, and palpitations.
And the risk of cardiovascular disease, which is not as much of a threat to younger women as it is to men, increases dramatically for menopausal women, indicating that estrogen makes a difference — and that replacement therapy makes sense, Renkus said.

In fact, women who worry about rumored breast cancer risks from estrogen therapy might not realize that such a risk, if it exists at all, is not dramatic in women who don’t have a family history of cancer. And it’s not nearly as dramatic as the risk of heart disease — which kills twice as many women as all forms of cancer combined — to a woman lacking estrogen.

As for breast cancer, Renkus said other risk factors will decide whether a women will develop cancer or not, and studies have never shown conclusively that estrogen therapy increases that risk. “The difference is so minimal in these studies that you really have to take them with a grain of salt.”

All the speakers at the seminar were equally supportive of the use of estrogen-replacement therapy. That’s not surprising, since the medical community recognizes the value of adding estrogen in combating the risk of osteoporosis, Alzheimer’s disease, and even colon cancer — as well as lessening the burdensome body changes menopause brings.

“Nature didn’t plan for post-menopausal women to be around, so to say, ‘I want to go natural’ just isn’t wise,” Renkus said. “You don’t get a medal for going natural. You just get to suffer for 30 years.”

But if estrogen combats some of the physical effects of these years, the psychological side of menopause is a completely different animal altogether — and it can be a troubling one.

“I keep hearing from women, ‘after menopause, I’m not a woman anymore,’” said Dr. Beverly Wise, a psychologist at Weldon Rehabilitation Hospital. “But this notion that a woman’s only role in life is to bear children, that’s a Donna Reed, 1950s attitude” — and it has to go, she added.

The proper attitude, Wise continued, is one that the happiest menopausal women have latched on to: the idea that, now that the children are grown, it’s time to do some of the things that I’ve always wanted to do. “Your life’s not over,” she said. “You get another life.”

Wise also used humor to get across her point that menopause does bring changes, but they should not be feared. “Women think that when they go through these changes, they go crazy,” she said. “Well, yes. Your body thinks it’s a man — how much crazier can you get?

“Use this time,” she continued. “It’s a great time to get into new things and make the changes you want to make. It’s a time for new freedoms.”

And in this changing time, she said, women should not be afraid of countering some of the more traumatic changes by using estrogen-replacement therapy to put back what the body has rid itself of. Estrogen won’t make a woman happier by itself, but it does improve sleep, increase energy level, and improve cognitive function — all quality-of-life changes that will lower depression.

They promoted a ‘Mediterranean food pyramid’ that stresses plenty of grains, fruits, vegetables, legumes, and low-fat cheese, milk, and yogurt daily, as well as two to four servings of fish and poultry per week and eggs, sweets, and red meat only a few times monthly.

Proper diet improves not only overall health, MacMillan said, but can actually cut down on hot flashes, as they can be triggered by factors that vary from woman to woman.

By discovering what foods can help bring on hot flashes — whether that’s chocolate, spicy food, red wine, or something else — and avoiding them, women can give themselves a smoother ride. And that ride can be long, Renkus said, as vasomotor flush can last anywhere from two to 15 years or more.

But MacMillan and Sabelowski spent more time on the importance of giving the body between 1,000 and 1,500 milligrams of calcium per day — either in supplements or, preferably, in food — to combat the increased risk of osteoporosis that estrogen loss causes. As a woman ages, Sabelowski said, the balance between the creation and breakdown of bone cells becomes skewed. Estrogen replacement makes the newly created bone cells stronger, but calcium forms the building blocks of those cells.

Equally important for menopausal bone health, MacMillan said, is weight-bearing exercise or impact cardiovascular activity, 30 to 40 minutes at a time at least three or four times weekly — but preferably every day. However, women should consult with doctors to understand their limits.

“If you push too hard,” MacMillan said, “you can actually give yourself a spinal compression fracture” — a common problem for older women.
Spreading Wings

Still, doctors repeatedly stress that dealing with menopause is a more complicated effort than crunching numbers for exercise times and calcium intake. Joanna Poppink, a marriage, family, and child counselor in Los Angeles, compares menopause to the transition a caterpillar makes into a butterfly.

“To cling to a previous or passing stage because we are unwilling or afraid to move to the next wastes energy,” she writes. “Straining to be what we were puts energy into the stress of creating an artificial structure we hope resembles the spent original.

“Caterpillars don’t struggle to be caterpillars. They move with their body changes and prepare for the butterfly stage. What a pity to miss it!”
Wise agrees with that concept. She emphasized that dealing with menopause isn’t just about estrogen enhancement — it must be accompanied by attitude enhancement if it is truly to be a rewarding time in a woman’s life.

“Use this time to grow and just spread your wings,” she concluded. “It’s wonderful.” 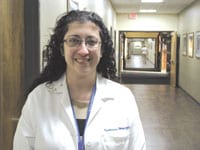 Viral Debate – The Facts Behind HPV, Cervical Cancer, and a Controversial Vaccine

Karoun Charkoudian says her passion for yoga — and desire to share it — deepened around the same time she moved to Springfield and saw a need for a yoga studio.

The Test of Time As Cancer Care Changes, Chemotherapy Remains a Constant Warrior