Since childhood, she has lived with a fist-sized growth above her mouth, shunned by her mother and receiving no answers from doctors in her hometown of Newton, Jamaica.
Then Claudette Johnson spent a year in America, where she received a new diagnosis, new treatments — and, eventually, a new look.

In the spring of 2001, Johnson, whose face had been disfigured by a massive tumor since childhood, was brought to live in Chicopee to face an uncertain — both medically and financially — effort to remove the growth, known as a venous anomaly.

It hasn’t always been an easy time, marked as it was by multiple surgeries and injections, looming complications, and the constant threat of being sent back home without getting the help she came for.

But it has been a journey of happy discoveries in more ways than one. The procedures, performed at Boston Children’s Hospital, resulted in the successful removal of the tumor. The Jamaican community in Springfield was a constant support, as were Johnson’s Chicopee hosts, Ann and Mike Wyszynski.

And the money to pay for her medical care — more than $100,000 in all — did come through, thanks to the generosity of individuals, businesses, and churches, many of whom hardly knew Johnson but felt moved by her plight. In addition, much of her treatment in Boston and at Mercy Medical Center was performed free of charge or at reduced rates.

“Lots of people have come to love and appreciate Claudette,” said Dr. Robert Kasper, a surgeon at Mercy who met her in 1997 on an annual volunteer trip to Jamaica with Medical Missions International. “It’s my feeling that the medical community throughout the country can be a very generous system — if you touch the right nerves.”

Still, he told The Healthcare News, it is remarkable that a 21-year-old single mother from rural Jamaica wound up receiving the best possible care for a condition untreatable in her own country.

After all, Johnson is quick to note, Jamaican doctors had attempted to remove the tumor when she was 10 years old, but failed to do so. Around that time, her mother, who had been embarrassed to take her out in public, abandoned her completely. She left Johnson with her father, a now-disabled man whom Johnson still cares for, along with her 5-year-old son, on a monthly income equivalent to five American dollars.

When the medical mission arrived in her hometown of Newton, Jamaica, in 1997, Johnson visited the volunteers, including Kasper, who has aided the mission for two weeks each November over the past 25 years.

Kasper evaluated her and first thought — incorrectly — that she had a hemangioma, a kind of benign tumor. Still, the volunteer group didn’t have the ability to treat it. But he thought he saw a ray of light when Dr. Kim Marble, a New Hampshire plastic surgeon, joined the mission in November 2000.

Marble put Johnson under anesthesia in an attempt to remove the growth. She began the procedure by placing stitches around the edge of the tumor to cut off blood flow. But when she got to the final stitch, Johnson’s eye suddenly and unexpectedly protruded from the socket, causing Marble to abandon the procedure and gingerly remove the stitching.

“It was terrifying,” Kasper said. “My fear was that the traction on the optic nerve could make her blind. When we saw her the next morning, we were thrilled that she could still see.”

Knowing now that Johnson didn’t have a hemangioma but unable to perform more sophisticated tests, Kasper knew that her only hope of treatment would come in the United States. That’s when the Wyszynskis, also regular volunteers with the mission, stepped in and offered Johnson a place in their home, launching an 18-month effort to bring the young woman to Massachusetts.

“When we brought Claudette here, we didn’t anticipate that it would be this complicated an undertaking,” Kasper said.

As Johnson underwent diagnostic tests free of charge at Mercy, Ann Wyszynski visited between 100 and 200 Web sites, looking for medical societies that could help her new houseguest. That effort brought her to Dr. John Mulliken at Boston Children’s Hospital, who saw Johnson in August and confirmed the diagnosis of a venous anomaly.

That condition, which can result in dramatic growths on the skin like Johnson’s, is characterized by malformed blood vessels. The trouble with treating Johnson was that because the anomaly affected three areas — a large lump above her mouth and two smaller areas behind her sinuses and left eye — shutting off the blood supply to the growth on her lip in order to operate could have caused swelling in the other two areas, threatening her sight and her brain.

To solve this problem, Mulliken decided, Johnson would receive injections that clot the blood flow to those vessels, followed a couple days later by surgery.

Doctors knew that removal of the tumor would eliminate the risk of fatal blood loss due to a possible rupture of the malformed blood vessels in her face. Permanent blindness, Wyszynski later told The Healthcare News, was another real possibility had the condition been left untreated. Still unanswered in the days before the surgery, however, was the question of how the treatment would be paid for.

Johnson applied for free care in Boston — a necessary step, since the injections alone cost $20,000 per treatment, and those injections plus surgery were expected to cost in the $90,000 range. However, close to the Jan. 16 surgery date, Johnson’s supporters came up with an initial $30,000 surge in donations — much of it from Kasper’s church, First Central Baptist in Chicopee, and most from one anonymous foundation. Meanwhile, Johnson was eventually approved for partial free care at the Boston hospital.

“I just felt the system could meet this woman’s needs,” Kasper said of the anxious moments of faith. “There’s a lot of generosity in the health care system.”

As Johnson’s visa to stay in America was extended twice, she also saw additional funds come in — small donations from bake sales and car washes as well as large ones, including an anonymous $60,000 donation.

The surgery itself, performed by Mulliken and Dr. Patricia Burroughs, lasted six hours and involved excising the malformation from the inside of Johnson’s mouth. What Johnson didn’t know at the time was that Mulliken is a leading expert on venous anomalies, Kasper explained. “This poor girl from the rural bush of Jamaica got the best care in the world,” he said with a smile.

Five days later, still unable to speak properly, Johnson returned to Chicopee, where she eventually watched the swelling go down and reveal a completely different face.

A second set of injections in April targeted masses behind the left eye, and though Johnson was informed of the risk of blindness, she took the chance — and came out with no sight damage. Another surgery in May was probably performed too soon, contributing to some necrosis above the upper lip, Kasper said, but doctors didn’t have much time before Johnson’s latest visa extension expired.

Johnson left for Jamaica in mid-June with fond memories of her foster family, a supportive Jamaican community, and experiences such as a trip to Six Flags and building her first snowman. And, of course, the surgery that changed her life.

Meanwhile, Kasper is still tidying up distribution of the donations to the doctors and institutions — including oral surgeons — who had a hand in Johnson’s care. He’s not taking a dime of it for granted.

“After Sept. 11, many mission organizations were hurt because a lot of people’s donations went to 9/11 relief programs, so they had to get by on any support they received,” he said.

“My faith is such that I believe God is going to come through, but I was personally anxious right before the operation when we had only a couple thousand dollars. Americans are generous to begin with, but I am amazed at what happened.” And, he added, Boston Children’s Hospital handles 10 to 20 requests per week for free care from around the world, so that aid was not a given for Johnson.

“It was a very sad story, but it’s not sad at this point,” he said. “It just helps maintain my faith in medicine.”

Kasper praised the Wyszynskis for giving a year of their lives to Johnson, but Ann Wyszynski said she was as enriched as Johnson, whom she considers another daughter.

“We knew she was something special, and we had a heart to help her if we could. When we asked her if she would come to the States, it turned out that she was willing,” Wyszynski said.

“It’s been a phenomenal experience. She’s just taken all of our hearts.”

That isn’t all Claudette Johnson took back home to Jamaica, of course. Thanks to modern medicine — and a big assist from the community — she brought back a new face as well. 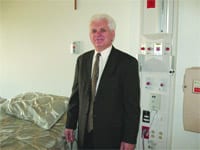