Health care professionals have been busy this spring sending a message to Beacon Hill that any budget cuts are going to make life difficult for providers and patients alike.
According to a prominent official in Gov. Mitt Romney’s administration, it isn’t easy for the decision makers in Boston, either.

“Anyone who says that the governor takes these cuts lightly is making a horrible mischaracterization,” said Christine C. Ferguson, the state’s commissioner of Public Health, during a recent visit to Mercy Medical Center in Springfield. “He understands the effects of these decisions.”

That’s not enough for area health administrators. Their concern isn’t Romney’s — or other lawmakers’ — level of concern; almost as one, they say they understand the bind the state finds itself in to close a $3 billion budget shortfall. But answers to their questions, they say, haven’t been easy to come by, and in some cases have changed by the week.

Perhaps reflective of the shifting nature of the budget debate, Ferguson was long on empathy but somewhat short on specifics during her presentation at Mercy, leaving administrators in the same holding pattern they have become accustomed to.

“The budget process is a live process, and what’s being contemplated and recommended one day changes the next day,” said Vincent McCorkle, Mercy’s president and CEO. “We have to have the discipline not to overreact when something happens.”

“I think our local legislators understand the plight of health care in Western Mass.,” said Hank Porten, president of Holyoke Hospital. “But is there enough money to address some of these issues, and what will be the priorities for the limited resources? There are many constituents vying for these funds, including cities, schools, and health care organizations.”

Clearly, as administrators await specific decisions from Boston — and the resolution of the budget debate is not far away — Romney’s personal concerns about the effects of the cuts, and Ferguson’s articulation of them, haven’t lessened anyone’s anxiety locally.

Part of the uncertainty stems from the fact that several different budget-cutting plans are being pushed in Boston, with a House and Senate conference committee yet to meet, as of press time, to bridge the differences.

Ferguson claimed that Romney’s own budget proposal does less damage to the health care system in Massachusetts than either the House or Senate version. “The House budget would decimate public health,” she said. “Gov. Romney has tried to retain as much infrastructure as we can and still maintain the savings.”

Still, administrators see even in the governor’s proposal more pain than they would like. For example, Romney proposes to cut hospital payments and patient benefits under Medicaid by $80 million — this coming on top of an existing scenario in which providers are reimbursed just 71 cents for every dollar they spend on care.

In addition, Romney proposes to save an additional $27 million through new co-pay requirements for patients, which hospitals would be forced to collect from the indigent; tighter eligibility standards; significant benefit reductions for immigrant populations; and premiums for coverage that may cause some patients to drop Medicaid. According to the Mass. Hospital Assoc., this would only cause them to depend further on emergency rooms for free care, straining an already stressed situation in ERs across the state.

Some of the gloomier proposals could still be overturned. The Senate’s separate budget proposal restores Medicaid coverage for 36,000 long-term-unemployed adults who lost coverage under MassHealth Basic on April 1, and also includes $96 million for the Prescription Advantage program, which helps the elderly pay for medications. The House budget contains just $59 million for the program.

At the Springfield meeting, health professionals grilled Ferguson on Romney’s plans regarding cuts in such programs as methadone treatment for heroin addicts, coverage for HIV patients, and a new managed-care system for the disabled.

Although she couldn’t give definite answers on the fate of any of those programs, she said repeatedly that no cut is necessarily permanent, and the state will look to reinstate programs once this year’s budget crisis has passed. However, it’s not that easy, McCorkle said.

“She said that in time, things will improve, and the cuts may not be permanent,” he said. “But you have to realize that, if the funding for a particular service stops and you have to close that program, the people who work in those programs have to meet their basic needs and support their families by finding other employment. So it’s not like turning a light back on. When the funding starts again, it takes a long time to build those health programs back up.”

And some program cuts, he said, would have drastic effects for patients right away. For instance, many drug users who treat their addictions with methadone would quickly revert to heroin or other drugs without the treatment. With Mercy’s own methadone program treating 1,000 people each day, “we have to think through the implications of 1,000 people turning to opiates when the program closes,” he said.

Ferguson said that Massachusetts residents, and many health care professionals, have an idea that budget cuts are made with a cavalier attitude, but she admitted that the Department of Public Health is partially responsible for that, in that it hasn’t done a good job educating people about its role.

“SARS drives home in a very stark way that we need a public health infrastructure,” she said. “I think that, if a big crisis were to emerge, people would better understand the commitment that exists.”

Ferguson is no stranger to health care decisions on the state level, having served as Rhode Island’s director of Human Services from 1995 to 2001, where she oversaw almost one-third of the state’s annual budget and funded services for veterans, senior citizens, low-income families, children, and the disabled. During her tenure, she restructured the state’s Medicaid managed-care system and crafted a welfare-implementation package.

However, she conceded, maintaining the net of health care response and vital services across Massachusetts is her biggest challenge to date, given the current tight fiscal climate.

Still, Ferguson said, the governor is committed to preserving not only physical health programs, but mental health ones as well, a key concern in the Mercy community, as Providence Behavioral Health Hospital falls under the Sisters of Providence Health System umbrella. “We want to look at people holistically,” she said, “not as arms, heads, and organs.”

And Romney also stands for reforming a costly malpractice-insurance system that has forced some doctors to give up certain practices, such as obstetrics, in the Commonwealth. It’s not necessarily a budget issue, she noted, but is indicative of the fact that Romney has the needs of health care providers in mind.

Whether he — and other lawmakers — see Western Mass. as a separate region with different problems than the Boston area is a major concern here.
While Ferguson said the state’s budget decision-makers have specific strategies for each region, she did not elaborate on details. Still, McCorkle believes legislators banging out the budget are keeping those unique needs in mind.

“I think we are fortunate to have a strong delegation of legislators representing us from Western Mass., in that they function they as a cohesive group and are a loud voice for us,” he said. “They’re certainly in the minority, so they have to be particularly effective to represent us, but I have a high degree of confidence that they’re doing that.”

“These are generally honorable people trying to do reasonable work in very difficult times,” Porten agreed. “I think our legislators have the will, but the question is, do they have the resources to address these issues? We’re already paid only 71 cents on the dollar for our costs, so this is not a good place to be.”

If the DPH needs to educate people about its role, hospitals and other facilities need to do a better job explaining their plight as well, McCorkle said.

“When people think of hospitals, their first perception is a large building with a lot of activity, and that creates the impression that things are fine and will continue that way indefinitely,” he said. “It’s a challenge to accurately communicate the economic health of hospitals in the Commonwealth in ways that are credible.”

Meanwhile, Porten said, lawmakers often don’t comprehend how the state’s neglect of the uncompensated care pool, which pays for free care for uninsured people, has placed tremendous strain on hospitals — and how additional Medicaid cuts will force more people into the ERs for primary care, further stressing the system. “The whole funding mechanism needs to be looked at,” he said.

Romney is looking closely at such situations, Ferguson assured Mercy employees during her presentation, saying “the most painful decisions of our lives” are wrapped up in the current budget debate. 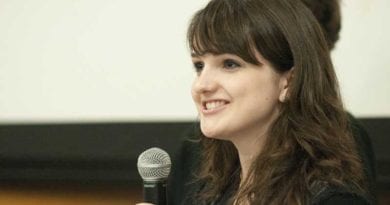