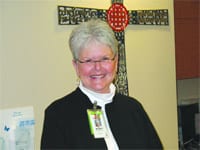 There’s something about the end of life that brings about a serious, often desperate search for meaning. Even in something as mundane as the color of a shawl.

“We use a lot of blues; Vietnamese people view blue as the sky or heaven,” Beverli Matakaetis said as she gently laid out several colorful, knitted “prayer shawls.”

“We’ve done violet for Christians; there’s an association with spirituality, peace, and comfort during grief or mourning. And turquoise, in the Latino population, often represents soothing, harmony, or balance.” And so on.

The shawls, which are knitted by a local interfaith ministry, are a critical component of the Companions for the Journey program begun at Mercy Medical Center last year. The program, launched with a $25,000 grant from the Lance Armstrong Foundation, enlists volunteers around the clock to sit with patients nearing death — those whose care has moved beyond medical intervention to comfort only — so that no one will die alone.

“It’s a program similar to hospice, only it’s inpatient, not in the home, and the focus is on culturally competent end-of-life care,” said Matakaetis, chaplain and licensed pastoral counselor at the Sr. Caritas Cancer Center at Mercy. The shawls provide a focus for some of the patients’ and family members’ final prayers, and simply give them something tangible to hold onto.

Meanwhile, the 25 volunteers (so far) with Companions for the Journey bring the shawls into hospital rooms — along with large doses of compassion and comfort.

“We really stand out from other hospitals in this,” Matakaetis said. “Most hospitals have chaplains sent when somebody is dying, but this program provides in-house, 24-hour companionship so the family can have a break. Until the person has passed away, someone is there.”

This month, The Healthcare News examines this wrinkle in end-of-life care in the region, and why the work touches its volunteers as deeply as it does patients and grieving families.

“It is not uncommon to see a dying person calling or reaching out to a deceased family member or to a religious figure,” states a brochure given to caregivers of dying loved ones at Mercy. “Rather than deny these descriptions, or correct their reports, try to listen and accept what is being said. This can be a sacred time for those witnessing the final stage and those making the passage.”

“A lot of times,” said Sherri Langevin, volunteer coordinator for the program, “if the patient is coherent, we’ll actually say a prayer with them if we know what faith they are.” It’s all part of the “culturally competent” mantra of Companions for the Journey — to make all dying patients, regardless of faith or cultural background, feel secure and embraced. The shawl, which has a prayer of blessing attached when it’s presented to the patient, is one tactile way in which that goal is achieved.

“I think it’s comfort for the patient. There’s a lot of love in it,” Langevin continued, noting that the volunteer knitters pray over each shawl. “I think it makes the patient feel at peace, but it’s also a connection for their loved ones after they’ve passed away. They often want to take it because it was a piece of them.”

The program serves various nationalities by providing information in a number of languages, but it’s also striving to serve all faiths as well, even though the hospital, like most of the dying patients, is Roman Catholic, Matakaetis said.

“We dialogue with the family in terms of their faith issues,” she explained. “If someone is Jewish, for instance, their rituals are different than those of a Buddhist.”

Speaking of which, the Maezumi Institute of Montague, a Zen study center, has sent several volunteers to the program, recognizing that, although it derives from a different religious tradition than that of Mercy Medical Center, many of their goals are the same. “It’s part of their practice to be with people in times of suffering,” Matakaetis said.

“The vigil is the time when we realize that we are not in control of the dying process. Death is very near. During this vigil, we watch, we comfort, we wait. Like birth, death comes in its own way, at its own time.”

There are some 25 companions in the program now, working under the direction of hospitalist Dr. Shawn Charest. Meanwhile, eight more are currently taking the eight-week training course. Many of the volunteers are hospital employees, clocking out of work at, say, 4 p.m. only to sit with a dying patient until 11 p.m. or so, when another volunteer takes over.

“We’re talking about a vigil here, and it’s taxing on everyone,” Matakaetis said. “We don’t get a warning; we just get a call.”

When a volunteer is summoned to a hospital floor where a patient seems to have taken the final turn, that patient receives constant companionship — at least when family cannot be there — 24 hours a day until the time of death. It’s not lighthearted work, she said, but those who feel called to it find their own rewards.

“The training course is an intensive program where you really have to look at your own fears and angst about death and dying, and come to the point of making sense of your own pain and fears” in order to empathize with the patient and family, she added.

Many of the companions have endured losses in their own lives and feel strongly like they need to give something back to those in a similar position, Matakaetis said. “They focus on listening skills, and they listen with their heart. They believe that no one should die alone.”

She likened it to the “wounded healer” concept embraced by the Zen tradition. “They have to be able to look at wounds they’ve incurred through loss, and those are their credentials,” she said. “They’ve been transformed, and they want to give back as a healed healer.”

“When the final breath is taken, remember that the person dies at just the right moment, whether he or she is alone or surrounded by others.”

Langevin has a binder filled with testimonials from both companions in the program and Mercy employees who have observed the effects of their work. One volunteer described a night when the husband of an unresponsive patient had to go home, and she took comfort in the fact that perhaps the dying woman could sense that she was not alone.

“I truly felt privileged to sit with her and share some of her last hours,” Langevin read from the letter. “Please call me again; it would be an honor.”

She looked up. “That word — honor — keeps coming up in the letters,” she said, adding that part of the satisfaction of being a volunteer comes in seeing the relief on the faces of family members who keep their own vigil but feel guilty going home.

“This removes the guilt from a family that wants someone to be there,” Langevin said. “It doesn’t even have to be them; they just don’t want to see the person die alone.”

“It’s about presence,” Matakaetis said. “We are a compassionate presence to patients and families, and that above all is key. We want the family to be less stressed during a major crisis point in their lives. The goal is to help people in a time of suffering and to have a gentle, peaceful death.” 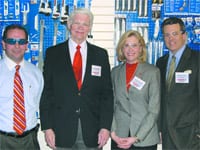