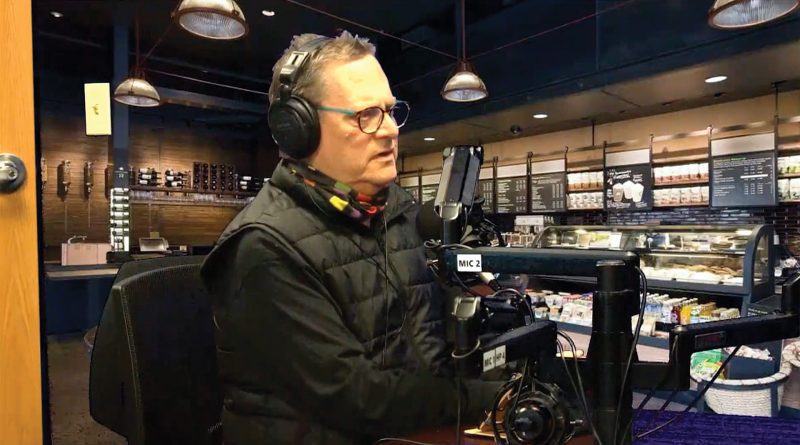 Wait of the World

Mark Auerbach says he had started down the stairs in his home in Longmeadow that night in 2019 when he tripped over an untied shoelace and started falling. He recalls knocking a bannister out of the railing and slamming through his front door.

As a result of the fall, he broke his femur and his hand, eventually spending more than three months in inpatient rehabilitation. But the fall did something else. It “fatally injured” one of his kidneys, as he put it, accelerating a process of deterioration that had begun years earlier when he was diagnosed with diabetes.

“In 2019, my kidney doctor said, ‘you are heading for the need for a transplant, and you’re in stage 4; eventually, you’ll be in stage 5, and you’ll need one,” he recalled, adding that stage 5 essentially arrived in the spring of 2021.

Soon thereafter, Auerbach, a veteran arts reporter, owner of a public-relations firm that bears his name, and current ArtsBeat reporter for Pioneer Valley Radio, joined the lengthy list of people in this country on a waiting list for a donated kidney.

How lengthy? Well, he was accepted into a donor program at Massachusetts General Hospital and is now one of roughly 1,400 patients in a queue waiting for the proverbial ‘right donor.’ Nationwide, there are approximately 100,000 people on such lists.

I didn’t really want to go public — you sacrifice your personal privacy when you put it out there. So I was really hesitant. But from a public-relations standpoint, I realized that if I didn’t tell my story, I couldn’t expect someone else to do it.”

While waiting for a kidney, many on those lists choose to be proactive and not simply wait. Some buy billboards stating their case, while others take out ads in newspapers and use social-media channels to encourage people to come forward and donate — not just for them, but for the myriad others waiting for a truly life-changing gift.

Auerbach is one of them. He said he has “gone public” — but in a quiet way, with personal appeals; regular postings on Facebook, LinkedIn, and Twitter; and interviews like this one and another on his ArtsBeat show with guest (and longtime friend) Patrick Berry, host of WWLP’s Mass Appeal — in his quest to find a donor for himself, but also to raise awareness about the urgent need for organs and to spur action.

“I didn’t really want to go public — you sacrifice your personal privacy when you put it out there,” he told HCN. “So I was really hesitant. But from a public-relations standpoint, I realized that if I didn’t tell my story, I couldn’t expect someone else to do it.”

He started with letters to family members, close friends, and clients alerting them to his situation and framing it in the larger context mentioned earlier — that he is one of 100,000 people waiting for a kidney and ‘here are the things you can do to help me.’ That list included everything from becoming an organ donor on one’s driver’s license to learning how to donate, to perhaps giving specifically to him.

Such proactive steps are becoming increasingly necessary, said Dr. Ken McPartland, medical director of the Transplant Division at Baystate Medical Center, who told HCN that the number of people on waiting lists is growing, the waits are often becoming longer, and the situation has been made worse, at least temporarily, by the pandemic, which prompted many potential living donors to remain on the sidelines out of caution.

“If someone has a living donor, they can get a transplant pretty much right away, which is usually within a few months,” said McPartland, part of a team that handles 50 kidney transplants a year at Baystate on average. “But if they don’t, they sometimes have to wait five to seven years to get a transplant.”

Of the 41,000 kidney transplants performed last year in this country, he noted, only 6,500 involved living donors — the rest of the organs were from those who were deceased, and the waits for those can be very long.

“There’s a huge need for more living donations,” he explained. “We know that people can donate a kidney and do very well and live a normal life. There is a risk, but the risks are is really low, and this is the biggest opportunity for improving not just the number of transplants, but the quality of transplants; we’d be able to help more people earlier in the process.”

Dr. Leo Riella, medical director of Kidney Transplantation at Mass General Brigham, agreed. He said the numbers — specifically those related to the number of transplants performed each year at his hospital and the number of people on the waiting list (170 and 1,400, respectively) — help tell the story of the importance of encouraging donations.

If someone has a living donor, they can get a transplant pretty much right away, which is usually within a few months. But if they don’t, they sometimes have to wait five to seven years to get a transplant.”

“That number of those waiting is growing by roughly 10% a year,” he noted, adding that there is a huge backlog of cases. And as people wait longer, their odds for achieving quality of life grow longer.

Auerbach quipped that it was easier for him to get into Mass General’s kidney-donation program than it was to get into the drama program at Yale.

He was exaggerating, obviously, but only to a degree. And the logistics of getting into a program constitute only one of the many challenges facing those who need a kidney — or any other organ.

For many, including Auerbach, there is the emotional trauma that comes with the news that they are essentially on a clock — they have so much time (in his case, 18 months to three years) to secure a donor before they will have to go on dialysis, or worse.

“That was a punch to the gut,” he told Berry on his radio program. “And I felt very alone at the time. My family, my partner, everybody was like, ‘that’s too bad — we’re here for you.’ But that’s not necessarily what I needed at the time. The only way for me to move forward was to take charge of my own life and to do my own planning.

That number of those waiting is growing by roughly 10% a year.”

“I thought, ‘worst-case scenario, if 18 months to three years is reality, you better have a will, you better have a way to transition out of your business, the people who work for you and depend on you — you better plan for that,’” he went on. “The other things is, do you want to be hooked up to a machine, or do you want quality of life? And I chose the good quality of life. But … my life will be expanded, knock on wood, if a donor comes through.”

And then, there is just the waiting, and not knowing if the phone is going to eventually ring with a caller delivering the news that a kidney has been found.

Unfortunately, as the population ages and with the numbers of donated kidneys — both from living donors and those who have died — being relatively stagnant, the number of people living in limbo (that’s the kindest word to use) is only increasing, said McPartland, noting that there are generally between 150 and 175 on the waiting list at Baystate Health at any given time.

As noted earlier, those without living donors may stay on the list five years or longer waiting for a kidney to be donated, he went on, adding that, for some, especially older patients, their condition may deteriorate while they are waiting — to the point where they become too sick to qualify for a transplant.

For quality-of-life reasons, someone needing a kidney will certainly fare much better if they can receive that organ before they need dialysis, McPartland added. “The way to really help patients is to get a transplant before they ever start dialysis. The patients do better, they live longer, and the kidneys work better and for longer.”

Riella agreed, noting that, in many cases, kidney disease, which he called a “silent disease” because those suffering from it generally do not experience pain or discomfort, isn’t detected until late in life — in many cases, too late, as their disease has progressed to the point where they cannot move up a waiting list in sufficient time to ultimately improve their quality of life through a transplant.

This is why early detection is important, he said, adding that blood tests can reveal if and to what degree the kidneys are in decline.

Overall, the average wait time for a kidney is six years, said Riella, adding that this number has only increased in recent years, and for several reasons, especially the aging of the population. “The gap in the number of kidneys available and the number that is needed is huge.”

Like other hospitals that perform kidney-transplant surgery, Baystate and Mass General are very active in efforts to help encourage people to donate organs, and also in helping those on lists to get kidneys through various means, including matching programs.

For example, if someone on a list finds a willing donor, but that kidney is not compatible, that kidney can be exchanged for one that is compatible through a voucher program, enabling people to move up on a waiting list.

It is for these reasons that Auerbach chose to go public despite his many reservations about doing so.

“I thought, ‘I’ll become the poster child for organ donations. Hopefully, I’ll get one, or at least the list will get whittled down, and I’ll move up the list faster. I’ll be the spokesperson for those 100,000 people.’ That was my motivation.”

While many fully understand the urgent need for kidneys and other organs, he explained, his story and that of others in similar situations must be told to reinforce the message and add a very needed personal touch.

Both McPartland and Riella agreed. They noted that, while much of the discussion about organ donations is focused on numbers — everything from how many individuals are on lists to how long their waits are — behind the statistics are real people, like Auerbach, facing quality-of-life, if not life-and-death, issues.

Auerbach told HCN that he tries not to think about the informal ‘clock’ he’s on — one doctor told him 18 months to three years, while another told him five years before he would need dialysis — and often wishes he was not given such estimates.

And he’s not alone in that sentiment. Such clocks, while helpful in the planning process, only increase the anxiety and make the waiting all the more tortuous, he noted.

“I’m trying to take it day-by-day and be optimistic,” he said. “To have a clock ticking as I’m watching and waiting would drive me crazy.”

The only thing that can shorten such waits is for more donors to come forward, said all those we spoke with, adding that this why stories like Auerbach’s need to be told. And why people need to listen — and respond.

It takes only five minutes to sign up to be an organ donor at www.organdonor.gov/sign-up. To learn more about becoming a living kidney donor, call Baystate Medical Center’s Transplant Program at (413) 794-2321, option 2, and speak with the living donor coordinator, or visit the Baystate Transplant website at baystatehealth.org/transplant for a confidential screening process. 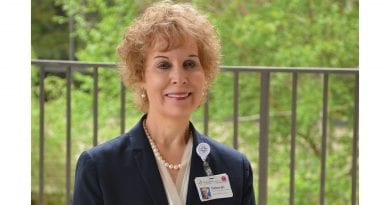 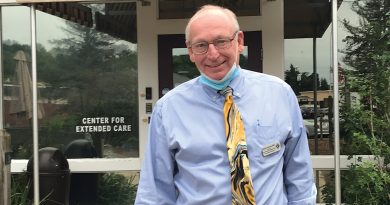 Senior Service Providers Navigate a Virus That Won’t Go Away 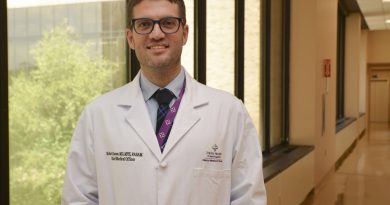 What Is Massachusetts Doing Right? And Can This Be Sustained?