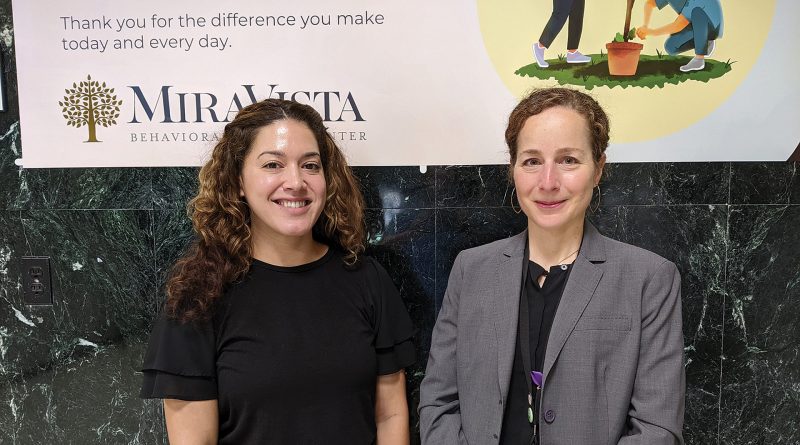 Christine Palmieri has read the numbers regarding a spike in overdose deaths in Massachusetts over the past couple years. But to her, they’re not just numbers.

“My role is to oversee our community-based programs that work with people who have experienced mental-health issues, substance-use disorders, and homelessness. As part of that, we run residential recovery programs for people who have a dual diagnosis, and we also run a number of different housing programs for people in recovery,” said Palmieri, vice president of Recovery and Housing at the Mental Health Assoc. (MHA) in Springfield. “And over the past year, maybe two years, we as a program have experienced more deaths by overdose than at any other time in my career.

“That’s troubling. There’s definitely times when it feels very hopeless and very frustrating, but I think our programs have done an excellent job of showing up every day, meeting people where they’re at,” she went on. “One of our programs is called GRIT, and that’s how I would describe what we need to keep coming back every day, and what the people we’re supporting in recovery need to keep coming back every day.”

After several years of decline, the rate of opioid-related overdose deaths in Massachusetts increased by 8.8% in 2021 compared to 2020, according to a June report by the Massachusetts Department of Public Health. Drug-overdose deaths in Massachusetts continue to trend lower than nationwide figures, but the statistics are still startling, with the rise in death rates reflecting the effects of the COVID-19 pandemic and an increasingly poisoned drug supply, primarily with the powerful synthetic opioid fentanyl.

We continue to be relentless in our commitment to increase access to harm-reduction services, low-threshold housing, and treatment. By working to destigmatize addiction and meeting people where they’re at, including with an expanded array of harm-reduction tools, we can reverse this negative trend.”

“Massachusetts and the rest of the country have definitely seen a rise in overdose rates during the pandemic,” said Dr. Katie Krauskopf, medical director of Substance Use Disorder Services at MiraVista Behavioral Health Center in Holyoke. “It looks like Massachusetts’ trend is better than nationally, and there is some indication that 2022 might be better than 2021. But we clearly saw people struggling during the pandemic, and a lot of that probably had to do with difficulty accessing care and the isolation that came along with it.”

In her experience, the pandemic impacted two groups differently: many of those with substance-use disorder who were already in treatment programs did better during the pandemic because the social restrictions helped them avoid some of the triggers they might normally have encountered more frequently. Meanwhile, regulatory changes around access to treatment allowed patients to take home medications they could not previously.

“So patients in treatment have done quite well,” she went on. “The real issue was the patients who were not already engaged in treatment and were unable to do so.”

The DPH found clear evidence that the COVID-19 pandemic had a profound impact on mental health and led to increased substance use and poorer mental health across the Commonwealth, especially among BIPOC communities and LGBTQ+ individuals.

“We continue to be relentless in our commitment to increase access to harm-reduction services, low-threshold housing, and treatment,” Health and Human Services Secretary Marylou Sudders said. “By working to destigmatize addiction and meeting people where they’re at, including with an expanded array of harm-reduction tools, we can reverse this negative trend.”

Locally, organizations committed to improving behavioral health — and removing the stigma and barriers that keep people from accessing care — are doing just that.

Palmieri said it’s important to remember that recovery doesn’t happen in a vacuum, but is tied to social determinants like housing and economic stability.

“Whether it’s opioids or anything else, our role is to help people understand what’s getting in the way of their recovery and help fill the void that used to be filled with drugs or alcohol with things they can find meaning in,” she told HCN. “We’re not only interested in sobriety and helping people stop using, but also, what are you going to do instead? Our primary goal in our residential programs and our housing programs is to make sure people have a safe, affordable place to go to live after treatment, someplace that isn’t necessarily the same neighborhood where they started using in the first place, someplace they can afford and sustain — but also to find employment, something that gives their life meaning beyond using, something they can wrap recovery around.”

René Piñero, vice president of Behavioral Health & Clinical Operations at MHA, said the pandemic curtailed some services in the community to counter addiction.

“But I definitely agree that it’s not all about accessible treatment; it’s about having housing and other supports. The state has provided funding for these programs and services, but it’s also about where people go to live after treatment, what supports they have, and opportunities to find employment. Even if we have treatment that is accessible for them, if we can’t find them a home address, it’s going to be more difficult.”

For those lacking access to care, the pandemic-driven isolation people felt didn’t help, Palmieri added — and in some cases increased a sense of stigma around seeking help.

It looks like Massachusetts’ trend is better than nationally, and there is some indication that 2022 might be better than 2021. But we clearly saw people struggling during the pandemic, and a lot of that probably had to do with difficulty accessing care and the isolation that came along with it.”

Krauskopf said the Greater Holyoke area has plenty of resources in place, including MiraVista, which offers a full continuum of substance-use programming, from acute inpatient detox to a clinical stabilization service to an intensive, four-week, outpatient program that teaches skills ranging from emotional regulation to mindfulness to dealing with triggers. “It’s not one-size-fits-all here at all. We have all these programs, and patients can really fit themselves into what they need at any given time and move through the services depending on where they are.”

The state has been aggressive with programming as well, expanding substance-use-disorder treatment and overdose-prevention initiatives since the start of the pandemic and distributing well over 150,000 naloxone kits since March 2020 to opioid-treatment programs, community health centers, hospital emergency departments, and houses of correction.

As part of the state’s expansion of access to naloxone, also known by the trade name Narcan, Springfield Pharmacy delivered 60 naloxone kits to MiraVista in September and covered the cost of the kits, representing a nearly $3,000 commitment to ensuring patients and staff have access to its lifesaving properties.

“The standing order allows us to dispense naloxone with or without a prescription to any person that is at risk of experiencing an opioid-related overdose,” said Alex Wu, Springfield Pharmacy manager and co-owner. “It also allows naloxone to be dispensed to family members, friends, or anyone that may be in the position to help an individual at risk of an overdose.”

Since 2015, the administration has worked with the Legislature to support a fivefold increase in spending across the state budget to address substance misuse, with the Commonwealth investing nearly $600 million in these initiatives in the FY 2023 budget signed by Baker.

The administration also worked with the Legislature to pass two landmark laws to address the opioid epidemic. The first law, passed in 2016, instituted a first-in-the-nation, seven-day limit on first-time opioid prescriptions and instituted new requirements around prescription monitoring and substance-misuse screenings. The second law, passed in 2018, improved access to treatment from settings such as emergency departments and the criminal justice system, and strengthened education and prevention efforts.

“Over the past eight years, we have made enormous strides in raising awareness and improving access to quality, equitable substance-use disorder and behavioral-health treatment across the Commonwealth,” Sudders said. “We have invested strategically in evidence-based resources and promising practices including peer recovery, clinical treatment, harm reduction, outreach programs, and low-threshold housing, recognizing that every individual’s path to recovery is unique.”

Cristina Rivera, director of Outpatient Services and Substance Use at MiraVista, agreed with the idea that everyone’s journey in fighting addiction is different.

“We know that recovery is ongoing, and there might be bumps in the road. In that sense, we help people wherever they’re at. If you start using substances again, it’s not like we’re not going to accept you into our program and try to get you back on track.”

“Recovery has its ups and downs just like other medical issues. Often, with diabetes, cancer, and other medical conditions that aren’t stigmatized, people are more willing to recognize that.”

Krauskopf agreed, citing studies suggesting that rates of relapse and loss of control in addiction recovery are similar to those in people managing diabetes, asthma, and high blood pressure.

“The notion that recovery is a straight line is not realistic; it’s really up and down. Part of the disease is that patients will relapse, and we’ll help them get their footing back,” she told HCN. “People have begun to pivot to understand this condition as a long-term chronic condition that requires people’s full attention at different levels of intensity, and we try to provide that here.

“Recovery is about medication for some, but lifestyle modification, too,” she added. “When you think about diabetes, many people do well with changes in their diet and exercise, and many people do that and need something else at well. It’s all the same goal.”

While the need for more resources is high, she said, especially when it comes to residential programs, the hope is that those struggling with addiction will see past the persistent stigma and seek help from the many resources that are currently available, and that those overdose numbers will start to fall again.

After all, they’re much more than just numbers. 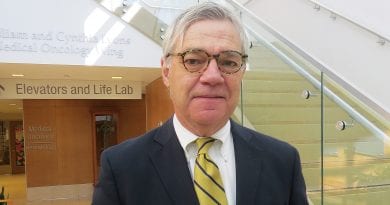