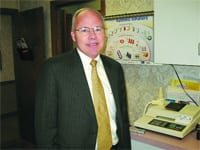 And it’s getting worse. A breathing condition triggered by any number of things — exercise, cold air, and allergies to plants, pets, and dust mites, to name a few — asthma has been a growing part of our lives for some time. In fact, according to the American Academy of Allergies, Asthma, and Immunology (AAAAI), the prevalence of asthma has roughly doubled over the past quarter-century.

“By and large, asthma is due to allergies to external stimuli, and our body reacts a bit excessively,” said Dr. Mohammad Bajwa, director of the Pulmonary Lab and Sleep Lab at Holyoke Medical Center. “Whether we call it allergy or hypersensitivity, that’s what asthma is.”

In technical terms, asthma is a chronic respiratory condition in which the airway occasionally constricts and becomes inflamed. In children, the most common triggers are viral illnesses like the common cold. This airway narrowing can cause a number of symptoms, from wheezing and coughing to chest tightness and shortness of breath.

“It affects all ages, but there is a predominance in childhood and then in old age,” Bajwa said. “That’s because those two groups are have fewer defenses. After childhood, many people outgrow asthma, and then later in life it can come back again.”

In addition, Bajwa said, some people are predisposed to asthma as children, then find they suffer from it as adults after some environmental trigger.

“That causes them to become hypersensitive again,” he said. “This kind of environmental exposure happens more in adult life, either outside, in the workplace, or at home.

Understanding the underlying causes of asthma can help doctors manage a condition that costs the health care system some $16.1 billion per year — more than $4 billion in inpatient hospital care alone.

“A lot of people predominantly have a runny nose and sneezing, what we call nasal allergies, and that will later lead to bronchial asthma,” Bajwa said. “And some people start with asthma and later develop the nasal symptoms, but in fact both of these things are the same disease. As physicians, we have to take care of both symptoms, the nose and lungs.”

Statistics tell a story of a widespread problem. Asthma and breathing-related allergies strike one-quarter of Americans, and children with asthmatic parents are at much higher risk. Some 20 million Americans have asthma, including 9 million children under age 18. In a given year, more than 4 million of those children have an asthma attack.

According to Robert McGovern, an allergy specialist based in Springfield, allergic disease generally manifests in one or more of four possible ways: asthma, allergic rhinitis (also known as hay fever), exzema, and hives. Although asthma can be triggered by a number of external factors, allergies are in play most of the time.

The exact cause of the increase in asthma has not been proven, but one theory has to do with hygiene and infections, McGovern said. “Because of improvements in our hygiene, people get fewer infections.”

The problem is, children don’t play outside as much as they used to, and parents have become much more obsessive about keeping kids clean and germ-free than they used to be — one reason why hand-sanitizing products like Purell have become so popular.

“What’s happening now is that the kids don’t get as sick as much anymore, and vaccinations prevent a lot of childhood illnesses, so your body remains in a state of Th2 predominance, which favors allergic disease,” he said. In other words, according to many experts, the immune system is just bored and looking for something to do — so it turns on itself.

“It’s a theory, but not a proven theory,” McGovern said. “Kids just don’t get as sick anymore. The medicine we have is too good.”

Thankfully, the medicine being used to treat asthma today is just as effective.

“If someone has asthma, they can be tested for allergies to identify what their triggers are, which also helps to direct the treatment,” McGovern said. “Certain medications might respond better than others, depending on the particular type of asthma a patient has.”

There are two types of asthma medications: controller therapies, which are taken regularly to keep the condition at bay; and ‘rescue’ therapy, typically an inhaler filled with doses of albuterol, a bronchodilator that immediately opens and relaxes the airway. Doctors don’t like to overtreat or undertreat asthma, McGovern said, but a good rule of thumb is that, if a patient is using a rescue inhaler more than two or three times a week, a better controller therapy is needed.

“The major revolution is the understanding of the disease process itself,” Bajwa said. “We’ve always thought that the bronchial tubes go into spasm and narrow down temporarily, and then, when the attack is over, go back to normal size. But now, the understanding is that there is always some degree of inflammation, on the lining of the nasal cavity or the bronchial tubes, and that plays a major role in the ongoing symptoms of the disease.”

With that in mind, doctors are more likely today to prescribe anti-inflammatory steroids, also taken through an inhaler, for regular maintenance of asthma. “When we talk of the whole spectrum of bronchial asthma,” he said, “the majority of patients will be OK with just that, but then some patients have symptoms every day, and those are the ones who need something more.”

Public awareness of asthma is also important, he said, and that was one goal of a state Senate report on asthma released in 2002. That report recommended greater health-insurance coverage for asthma-related supplies and education, more state-sponsored educational efforts around asthma, a centralized state asthma data registry, better indoor-air-quality standards in schools and other public buildings, and better enforcement of the state’s anti-idling law aimed at public transit buses and other diesel-burning vehicles that pollute outdoor air.

Awareness can be an individual effort, Bajwa added, noting that asthmatic people can use peak-flow meters — devices that measure lung strength — at home to detect breathing problems before an attack.

“The goal is to keep more patients at home and minimize visits to the emergency room,” he said — an effort that, in these stressed times for hospitals, should have everyone breathing a little easier. 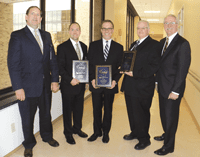 State To Lose Another Hospital

Men, Take Care of Yourselves