Chalk up one for the environment — although not all asthma sufferers are happy about going ‘green.’

The inhalers that dispense a drug called albuterol, a ‘rescue’ treatment that opens airways during an asthma attack, have part of the lives of millions of Americans for decades — as important to the daily leaving-the-house checklist as a wallet and car keys.

But starting this year, those people must get used to a new type of inhaler. Why? The traditional inhalers employ ozone-depleting propellants called chlorofluorocarbons (CFCs) to send albuterol into the lungs. As a measure to protect the ozone layer, the U.S. Food and Drug Administration has told makers of albuterol inhalers that they must stop using CFCs altogether.

They are gradually being phased out throughout 2008 and replaced by hydrofluoroaklane (HFA) inhalers, which will become the only option for patients on Dec. 31.

“Some bronchodilators, the drugs which open bronchial tubes, can be given by a new kind of inhaler, which is easy to use,” said Dr. Mohammad Bajwa, director of the Pulmonary Lab and Sleep Lab at Holyoke Medical Center. In addition, “its duration of action is quite long — you need it only once or twice a day.”

Still, the change has come under fire from some albuterol users, both for the relief it provides at the moment of attack, and because some believe the traditional inhalers actually pose very little environmental risk.

Albuterol is a type of drug known as a short-acting beta2-agonist. This quick-relief medicine immediately relaxes and opens airways and relieves asthma symptoms, with effects typically lasting about four hours. It does not prevent asthma attacks, and is not recommended as an everyday treatment. Since albuterol inhalers are not meant to control asthma in the long term, patients should not use them more than two or three times per week.

“If you are using your albuterol inhaler more frequently than this, talk to your doctor about taking inhaled steroids, which are recommended by the National Institutes of Health for controlling asthma,” said Dr. Norman Edelman, chief medical officer of the American Lung Assoc., on the ALA’s Web site. “Inhaled steroids reduce the airway swelling that makes asthma attacks more likely.”

The decision to eliminate CFC inhalers resulted from U.S. participation in the Montreal Protocol, a 1987 international treaty to eliminate the production and consumption of ozone-depleting chemicals. The ALA led a successful effort to have the inhalers exempted from the Montreal Protocol in 1994, to give inhaler manufacturers time to develop CFC-free devices and provide sufficient transition time for patients and doctors. But the clock has almost run out, while some continue to protest the decision.

“This is another cynical exploitation of kids for the sake of environmental correctness,” said Robert Goldberg, senior research fellow at George Washington University’s Center for Neuroscience, Medical Progress, and Society, who contributed his thoughts online to the National Campaign to Save CFC Asthma Inhalers(www.ipetitions.com/petition/ savecfcinhalers).

Opponents of the decision claim that great progress has been made in reducing CFC emissions in the U.S. to less than 1{06cf2b9696b159f874511d23dbc893eb1ac83014175ed30550cfff22781411e5} of what they were during 1987, the country’s peak year of CFC use. In arguing that the decision is more about conforming to international opinion than good science, they point to 1999 testimony by Dr. Robert Meyer, then serving as the FDA’s director of Pulmonary and Allergy Drug Products.

“You know, if you look at any single use [of CFCs] with perhaps some glaring exceptions, they tend to look fairly small, but when you’ve committed to the overall phaseout, that’s the commitment,” he said at the time. “So we’re not really here to argue whether that’s a good thing or not. It is the way the international community and the U.S. is going to proceed. So we’re more interested in discussing how to best get there.”

However, HFAs also have some little-known advantages over CFCs, said Dr. Richard W. Honsinger Jr., a clinical professor at the University of New Mexico, writing for the online journal Revolution Health. HFAs, for example, work better than CFCs at high altitudes and also tend to hold their pressurization better in cold weather.

The FDA has deemed the new inhalers safe and effective, but noted that they are somewhat different in taste, delivery feel, and other attributes. Also, while all CFC inhalers contain the same inactive ingredients, this is not true of the HFA albuterol products, so the agency recommends that patients try various kinds to find one that is most agreeable.

Still, even for those who become accustomed to the new inhalers, cost remains a negative. The HFA inhalers cost between $30 and $60, compared with $5 to $25 for a generic CFC inhaler.

“Depending on your insurance, these new inhalers may be more expensive, but our hope is that as more people move to the CFC-free delivery method that the price will come down,” Edelman said.

Get Used to It

However, supporters of the change say the price is really the only downside, and people — particularly those who have used CFC inhalers for many years — just need to give the new inhalers time.

Dr. Robert McGovern, an allergy specialist based in Springfield, admitted that some patients don’t care for the new inhalers because they don’t get the initial ‘burst’ that immediately eases breathing when using the CFC inhalers. But despite the lack of that sensation, he said, they open the lungs just as well. “Studies have shown that the HFA inhalers are just as effective at treating the asthma.”

Protecting the environment in the meantime, proponents say, is simply an extra breath of fresh air. 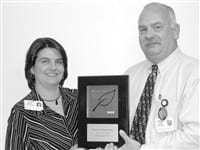 National Provider Identifiers As The Deadline Approaches, Physicians, Groups, And Hospitals Must Know The Score