Scott Keen says he and other administrators at HealthSouth’s Ludlow facility have known for some time that larger, more efficient space is necessary to effectively carry out the rehabilitation hospital’s mission.

And the search for such space has been ongoing for many years now, said Keen, HealthSouth’s president, adding that the goal has always been to stay within the community and build a new facility that would both serve present needs and provide the room and flexibility to grow.

The search essentially ended several months ago when Keen, while attending a local chamber event, was advised to give a long, hard look at the former Ludlow Mills site, the subject of a comprehensive reuse and regional economic development project initiated by Westmass Development.

He did, and that started a series of talks that eventually led him to the podium on Dec. 13, as one of the headliners at a press conference/celebration called “The Re-emergence of the Ludlow Mills.” There, he announced plans for a new, 72,000 square-foot, 53-bed rehabilitation hospital to take shape on 10 acres of land inside the complex. The projected cost is about $25 million.

Following him to the microphone was Larry Curtis, a principal with Boston-based WinnDevelopment, which has put plans on the table for a 100,000-square-foot, 82-unit senior independent-living facility in what’s known as Mill 10 at the complex. The company, which specializes in rehabbing old mills into mixed-income housing complexes and has a number of local projects in its vast portfolio, intends to use state and federal historical tax credits to finance a large portion of the projected $20 million initiative.

The twin announcements were the highlights of an event designed to mark the official acquisition of property, finalized a few months ago after nearly three years of due diligence and a complex closing process. Richard K. Sullivan Jr., state secretary of Energy and Environmental Affairs, was on hand, as were a number of other elected leaders and area economic-development leaders.

They were there to mark the beginning of a new era for the mills, a former jute-manufacturing complex that has been an enduring symbol of Ludlow (the complex’s clock tower is on the town seal), but has been mostly vacant for many years.

Westmass initiated the process of acquiring the property in early 2008, said the agency’s president, Kenn Delude, with an eye toward creating a unique mixed-use facility that would feature a number of components — from residential to manufacturing — and both new construction and rehabilitation of the more than 1.5 million square feet of mill space.

The HealthSouth and WinnDevelopment projects provide a very solid start to redevelopment efforts and a good source of momentum moving forward in a project expected to unfold over the next few decades, he told HCN.

“The announcement of these new, high-profile projects represents a critical stage in the development of one of the most significant business resources in the region,” said Delude, adding that Westmass is in the process of developing a master plan for the site as well as what he called a “new business environment” that he expects to become home to businesses across a wide range of sectors, including health care.

Keen told HCN that design work will be underway soon on the new HealthSouth facility. The company has applied for a determination of need that would allow it it to relocate its 53 beds and have the opportunity to align the new hospital’s interior with the current trends of private rooms and an open-floor-plan gym.

While the current facility, which encompasses most of the former Ludlow Hospital, has served the company well, Keen said, the need to spread services over floors creates logistical headaches and operations far less efficient than are possible at the single-floor hospital that is planned.

“We’ve been looking at options internally and externally for many years,” he said, adding that the search had been been ongoing long before he arrived in 2008.

A move to Ludlow Mills helps the company accomplish many goals, he continued, noting that it gives the company more and better space while enabling it to remain in the community that’s been its home for nearly 15 years. “And it helps bring life back to an historic landmark.”

Curtis, meanwhile, told HCN that, when it comes to turning old mills into residential complexes, some are better suited for that purpose than others.

“Often, these mills are too deep from window line to window line,” he explained, “They’re 120 feet — that was the standard New England mill. And if you did a typical apartment corridor in the middle and built units off the end, you’d end up with monster units that are just too big relative to the square footage, especially for elderly housing, which is where the town said the demand was.”

Mill 10 at the Ludlow complex apparently has the necessary ingredients and dimensions, he went on, adding that, if the funding falls into place as anticipated, he expects the Ludlow Lofts (that’s the unofficial working name for the project) to be the latest addition to a portfolio that boasts a number of local projects.

They include Mill Valley Estates in Amherst, Edgewood Apartments in Westfield, Churchill Homes in Holyoke, Chicopee Village Townhouses, and several projects in Springfield, including Allen Park I & II, Forest Park Apartments, Eastbrook Apartments, and Museum Park, so-called because it’s located across Chestnut Street from the Quadrangle.

In many cases, the company rehabs old mill buildings, said Curtis, and many of its initiatives involve what he called “mixed-income housing,” a term used to describe a price point created for those who don’t qualify for housing subsidies, but who earn incomes that do not enable them to buy homes, especially in the eastern part of the state, where real-estate prices are much higher.

WinnDevelopment has created a number of senior independent-living facilities like the one planned for Ludlow Mills, said Curtis, including a recently completed project in Fall River called Wampanoag Mills. He described them as “magnets,” because they meet a recognized need in a community — an attractive housing alternative for empty-nesters looking to shed the burden and expense of caring for a large home they no longer matches their lifestyle.

“Two years out, we’ll have a great mill that will be a candidate for the 65-year-old empty-nester living in a 2,400-square-foot monster house that he and his wife don’t want anymore and don’t need anymore,” he told HCN. “It becomes great housing; the units are big because the nature of these mills provides for large volume, large-square-footage living spaces with high ceilings.”

Keen didn’t have a firm timetable for HealthSouth’s ambitious project, but he expects that work will start sometime next year.

That construction, coupled with the anticipated start of work at Mill 10, will signify that the talk about ushering in a new era at Ludlow Mills will be over, and the realization of that dream will be underway.

Where things will end is anyone’s guess, but they’ve begun with two intriguing projects that put an exclamation point behind statements that, when it comes to Ludlow’s most enduring landmark, the future is now. 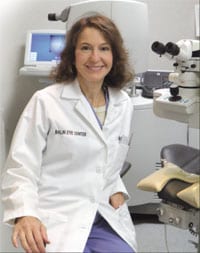 Contacts or Surgery? Patients See Advances in Both Kinds of Vision Correction