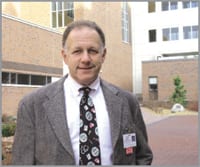 One of the most important aspects of Cooley Dickinson Hospital’s possible merger with another health system in 2012, Craig Melin says, is that it doesn’t have to happen.

“The issue is more in our future than with other hospitals,” said Melin, president and CEO of the Northampton-based institution “We’re OK for now, though you’ll find that other hospitals are having problems and facing pressures. But there are broader forces, and it’s going to happen to all of us.”

Those forces, he explained, include the Great Recession — specifically, an ongoing contraction in jobs contributing to a shrinking tax base, which impacts health care revenue sources like Medicare and Medicaid. At the same time, the recession’s impact on pocketbooks has lowered demand for many elective procedures that bring income into hospitals.

On the other hand, costs of care keep rising, to the point where the old models of paying for it are no longer workable in the long term, especially for an independent facility like CDH. Those tea leaves, among other factors, have driven the hospital’s search for a partner — but on its own terms, before the shifting economics of health care force its hand.

Recently, CDH narrowed its merger discussions to two potential partners: Massachusetts General Hospital, with which it already collaborates on cancer care, and Baystate Health, which comprises three hospitals — in Springfield, Greenfield, and Ware — and dozens of other medical facilities across the Pioneer Valley.

A third option, Vanguard Health System, was recently eliminated from discussion. The only for-profit system among the suitors, Vanguard offered the possibility of a locally controlled foundation, with $2 million to $4 million available each year for preventive health efforts, but its lack of current clinical connections with CDH was a major factor in the decision not to deepen talks.

The other two have submitted proposals outlining their terms for a merger, and Cooley Dickinson’s board expects to make a decision by late February on with affiliation to accept, if any. This month, HCN takes a look at those two options, the differing benefits they bring to the table, and why CDH no longer wants to go it alone.

Melin said CDH — which was part of the Dartmouth-Hitchcock Alliance from 1993 to 2008 — has focused its latest merger efforts on meeting three goals: cost savings, program development, and coordination of care.

One factor in rising costs is what Melin calls “high-cost, low-volume programs” — for example, cardiac catheterization, pediatrics, or robotic surgery. If you don’t have enough patients using those, you should be asking yourself, can we afford to keep this service in the community, or will people need to go somewhere else?

“Having a partner who can help either build the number, depth, and breadth of physicians who can support it, or help redistribute patients so they can take advantage of a program, is a way of doing that,” he continued. Overhead costs, from software licensing to malpractice insurance to medications, can also be lower under a partnership.

Melin said being owned by a larger health system — the scenario an alliance with Baystate or Mass General would ultimately be — can allow more attractive capital borrowing terms as well.

“The reason Dartmouth-Hitchcock would feel comfortable letting us co-borrow at their rates was they knew they had ultimate control; if things weren’t going well here, they could step in and take over our economics or take on any clinical issues,” he said. “You don’t do that for someone who’s just a friendly partner.”

Melin noted that, as health care in Massachusetts moves toward an accountable-care model — where providers work collaboratively to provide ideal care to each patient for one set payment — the shift is actually one that plays into CDH’s philosophy.

“Right now, health care is treated as piecework, where the more you do, the more you make, and that’s never fit our values. Now we’re actually going to be rewarded for doing the right thing,” he said, noting, for example, that patients have received home visits for congestive heart failure to monitor symptoms.

“Nobody paid for that, but we did it anyway. That was a cost. And it reduced the number of patients coming into the hospital, so we also lost that revenue. We lost on both sides. In the new environment, we win on both sides, because it’s finally rewarding us for the values that we have, which is keeping the community healthy.”

How does that concept apply to a merger? Simply put, a partnership makes it easier to coordinate a patient’s overall care so he’s not over- or undertreated.

“If a patient is treated at Cooley Dickinson and sent elsewhere, we would like for our partner to do only what they need to for a patient and not every possible test,” Melin said. “If we’re in the same risk pool, if you will — if they own the consequence of the spending they do outside of our care system — then we believe they’ll be fully accountable partners who will help us in that new payment environment.”

CDH already refers cancer patients for specialized services at Mass General, which in turn has connections with other Boston-area providers for especially esoteric treatments. “That’s sort of the model, and we’ll extend that to other areas.”

In fact, Mass General’s breadth of services is a key consideration when considering that system for an alliance. For example, it offers wide use of telemedicine, which would allow neurologists there to consult on patient care in Northampton.

“Mass General is clearly a powerhouse of academic care and ’quarternary care,’ somewhere beyond tertiary care, which is what people think about when they think of a teaching hospital. What that means is they can do most anything on the far end of what patients need, and the question then is, what does that mean for a community hospital?”

In the case of Baystate, it’s a different model altogether, he explained. “It’s rethinking the whole Pioneer Valley … how would you start to put programs where the patients really are and bolster them?”

For example, he said, a patient in Greenfield who needs a specialized service not offered at Baystate Franklin Hospital currently has to travel all the way to Springfield, when CDH might be able to offer that treatment at roughly half the travel distance. Baystate’s extensive network of hospitals and smaller facilities could eventually strengthen — and be strengthened by — existing CDH programs throughout the region, making life easier for patients.

He said concerns have arisen in the CDH community about local control, but again pointed out that it wasn’t an issue in the 15 years with Dartmouth-Hitchcock.

The Mass General model includes local boards for each hospital, while Baystate currently opts for one overall board. “That’s one issue up for discussion” with Baystate, he explained — “how to involve the local community in decision making. That’s key to this affiliation issue.”

Still, “the better we are at making the economics in this community work and providing good care, the less an outside system is going to step in and tell us what to do. Why would they disrupt that? In fact, why wouldn’t they learn from Cooley Dickinson?”

One area where a partner or parent system might take lessons from CDH is its widely recognized — and highly successful — initiatives to reduce hospital-borne infections.

In any case, Melin said, joining another health system poses many benefits over staying independent in an increasingly collaborative industry. Recognizing that fact before it’s forced to make a move, he believes, puts Cooley Dickinson in a position of strength.

“A lot of hospitals wait until they’re in trouble, and then it’s an easy decision to let go of your control,” he said. “Cooley Dickinson will not do this unless it helps us become a more robust system than we already are.

“We don’t have to do this,” Melin concluded. “That’s the nice thing about taking steps when you’re strong, rather than waiting until you’re not.”