Wood chips.
That’s what the latest print and television ads for Cooley Dickinson Hospital (CDH) are all about.

The hospital, according to the ad, uses wood chips — some 22 tons of them a day, 8,000 tons a year — instead of oil or natural gas, to fuel the plant that provides heat, hot water, and steam. The chips, bought from Northampton-based Cotton Tree Service, save the hospital about $1,000 a day.

What does all this have to do health care? Cooley Dickinson has made a commitment recently to staffing up, with the goal of improving the quality of care from “really good to great,” in the words of CDH President Craig Melin. That strategy runs counter to that of many hospitals, which are pulling back on hiring in these challenging economic times. Adding staff is expensive, but Melin says the hospital can afford to do it because its non-clinical expenses — like heating and cooling the hospital — are among the lowest in the entire Commonwealth.
By using wood chips, the hospital is able to devote more funding to staffing, which not only improves the overall quality of care, but makes CDH a far more enjoyable place to work, making it easier to recruit and retain employees, he said.

So, when looked at that way, wood chips actually have quite a bit to do with health care, said Darby O’Brien, president of the marketing and public relations firm that bears his name and was charged with creating a new campaign for CDH.

That initiative, dubbed Way Cooley, has many facets, said O’Brien, all designed to help the hospital recruit and retain talent, and to also promote the package of the hospital and the Greater Northampton community.

Components of the campaign include everything from bumper stickers, T-shirts, hats, and other paraphernalia that have the Way Cooley slogan on them — two people wearing such hats gained some air time on a recent edition of the Today show — to hospital vehicles vinyl-wrapped with the message ‘Know Any Nurses? Steer Them Our Way.’

Collectively, those elements have proven effective, said Melin, who told The Healthcare News that the new campaign is one reason why the hospital has one of he lowest vacancy rates for nurses in the state.

“It has more than paid for itself,” he said of the campaign, adding that the internal and external components of the program have greatly improved communications with both the staff and the community the hospital serves. “And any time you improve that communication process, good things happen.”

Melin explained the wood chip program, as well its use in the ad campaign, to CDH staffers in an internal publication sent out with employees’paychecks. At the top of the flyer is a shot of the back of Melin’s head with the publication’s title — ‘Know It All.’ Melin has degrees from MIT and Harvard, and is no doubt deserved of the nickname.

Under the headline “Sometimes Money Does Grow on Trees,” Melin lets employees know why the hospital is using wood chips to sell the hospital.

“Today more than ever, people don’t just ask about the services you offer; they also ask about the values you stand for,” he writes. “This is particularly true of the educated, socially aware members of our community. This wood chips spot will help differentiate us from the competition and help us connect with our target audience. This will help us over the long term by increasing our volume in key areas such as childbirth, oncology, cardiology … which will help us become a more successful hospital.”

This, in a nutshell, is what Way Cooley is all about. It’s a different kind of hospital marketing campaign, one that raised a few eyebrows within the CDH community in its early stages, Melin said. But it has ultimately been successful in achieving progress in some key areas, especially in the recruitment and retention of employees.

Indeed, one early facet of the campaign — taking prospective nurses to dinner at some of Northampton’s many fine eateries — proved very successful, said Christina Trinchero, CDH’s director of public relations.

Ads to promote the program, print spots that invite nurse candidates to dinner at the Eastside Grill, have been effective in selling not only the hospital, but also the community it serves, she said, noting that one recruit informed the hospital that she had made up her mind to join CDH, but still wanted to go to dinner.

Meanwhile, the successful campaign to recruit new nurses has enabled the hospital to cut down dramatically on its use of agency nurses, said Melin, saving CDH hundreds of thousands of dollars in the process.

And as the hospital ramps up its staffing, it is taking giant steps in its broader efforts to improve the overall quality of care at CDH, said Melin.

“We’ve identified, well ahead of all the literature, that staffing is a critical ingredient in providing great care and making this hospital an enjoyable place in which to work,” he said.
“We knew that there was a national and statewide shortage of professionals in a number of care areas, and we were experiencing that as well. So we decided to staff up so that the jobs would be more enjoyable and people would feel good about the care they were delivering at the end of the day.

“With that decision, there was the question of how people would know that we were doing that,” he continued. “We thought that our commitment to moving the care from really good to great — and our commitment to seeing that the staff was a critical piece of that — needed to be said in a much stronger way.”

As a result, the hospital contracted with O’Brien to get its message across.

The process began with colorful Way Cooley stickers, which began appearing in every corner of the hospital, said Trinchero. It continued with a multi-faceted campaign that included everything from the message-carrying vehicles to a host of new internal publications.

The true test of any campaign is its ability to get results, said Trinchero, and thus far, there are tangible, measurable benefits, she said. Perhaps the most important statistic to date has been the hospital’s dramatic reduction in the use of agency nurses, which can cost two to three times as much as staff nurses.

At one time, there were as many as 30 agency nurses working at CDH, she said, noting that the hospital should reach its goal of eliminating use of agency personnel in a few months.
On top of all the financial benefits being reaped by the Way Cooley campaign, the hospital is also getting some attention from around the region and across the country.

The wood-chips ad has brought a surprising number of calls and E-mails from local officials and business owners who were not aware that the hospital used such an unconventional, environmentally friendly system for heating and cooling its facilities, said Trinchero. “People are blown away by this.”

Meanwhile, Donald Spear, plant operations supervisor at CDH, has received a flood of calls from businesses and government agencies who want to know more about the system and how they can apply it in other settings.

“They’ve generated a good deal of attention,” Spear said of the print and television ads. “People are looking at what we’re doing and asking if they can do the same thing.”

Trinchero has entered the wood-chips segment of the Way Cooley campaign in the New England Society of Healthcare Communicators annual Lamplighter Awards contest. She told The Healthcare News she’ll know early this fall if the entry is a winner.

The CDH community doesn’t have to wait that long to know if the campaign is a winner where it really counts — in the hospital’s mission to improve its quality of care.

“It’s already paid for itself many times over,” Melin said of Way Cooley. “It’s been very successful in helping us to get our message heard.”

It seems that money really does grow on trees. 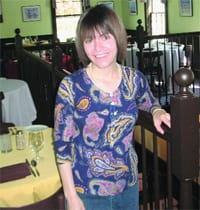 Most Companies Are Planning for Avain Flu Pandemic, but Outcomes Remain Uncertain