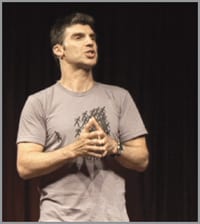 “You took something so painful in your life, and made it worth something.”

In the decade-plus since John Morello launched his one-man dramatic show “Dirt,” he has kept an ever-growing collection of notes and e-mails from teenagers (and some adults) from across the country, thanking him for speaking with them — not at them — about drugs, bullying, and other issues they face every day.

The girl who wrote him (by hand) in 2009 is right — much of Morello’s work is born of personal pain. And that pain has only increased. “Dirt” was written in 2001, during the years when his brother, Glenn, struggled with heroin addiction; he died early in 2003.

“When he passed, I had a show about two weeks after that, and as hard as it was, the best thing for me was to get back on stage,” he said. “Along with going to therapy and grief counseling in my own life, it was the best form of grief counseling in the world, and it also made me feel like what my brother suffered would not be in vain.

“For all the things he had wrong with him because of his disease of addiction,” Morello continued, “there were so many great things about him — his bravery, and his love, and his sense of humor … he was a genuinely good man. Those things can live on.”

That spirit lives on not only in “Dirt” — which Morello has long touted as an exciting, thoughtful alternative to the ’just-say-no’ assemblies teenagers have heard dozens of times and usually tune out — but also in a just-published graphic novel, the first in a planned series, based around characters from the show.

“The neat thing about graphic novels is that you can do anything; it’s limitless,” he said. “I felt a graphic novel was the perfect format for this show, especially since a lot of characters have these fantasy dream sequences.”

For this issue’s focus on Behavioral Health, HCN visits this Worcester native who has seen his fair share of tragedy — and may be averting more of it by using multiple artistic media to inspire kids across the U.S.

The idea to create a one-man, multi-character show germinated for some time before Morello took it to the stage.

“I was a touring comic, headlining for six or seven years at various clubs, mostly in the Northeast; sometimes I would go out to California, trying to make it, whatever that means,” he said.

Having a degree in drama, he also busied himself with community theater and Shakespeare productions, but stage opportunities are limited for someone who doesn’t sing or dance, so standup comedy became his main outlet.

Meanwhile, “the underlying personal story was, my brother was a heroin addict, so I would be traveling on the road, calling home to see how he was doing, and when I was home, I tried to stay involved in his recovery as much as I could, going to meetings with him and supporting him. And all the while, I was going on stage, trying to be funny.”

Around this time, he began writing monologues — character studies, actually — and was inspired by performers like Eric Bogosian who were doing innovative things with the solo format.

“When I saw him on stage, I thought, ’wow’ … I’d always thought there were certain rules about what you could do and couldn’t do on stage,” he told HCN. “But I learned you could do whatever you want, as long as you make it engaging. And it kind of opened my mind to doing a one-main show.”

So Morello developed “Dirt,” featuring a raft of different characters — male and female, young and old — including a young man searching for ecstasy, a college-bound woman who drinks socially, and a young ’dude’ sharing his theories about marijuana and hemp. At one point, Morello mixes in a monologue from a World War II veteran reflecting on his choices in battle and his sacrifices for the present generation. Humor and music play a significant role, too.

Early on, when he was pitching the show, a school invited him to perform, and administrators liked what they saw. Next, he was invited to a teachers’ conference; they were equally impressed.

“I had never really imagined myself performing in an educational setting,” Morello said, noting that he figured he would perform “Dirt” in professional theater settings. But working in schools promised more opportunities, as well as lending a mission to his art.

“I felt like that’s what I wanted to do; it felt good,” he said. “I really felt like I was making a difference, that I’ve got something to say that’s unique and not heavy-handed. At the time, I was washing windows, driving a trolley in Boston, doing a little bit of everything, trying to piece together an income, like most artists do. When I started performing in the educational world, I realized I could make a living from this.”

After launching the show in late 2001, Morello didn’t quit his other jobs until 2006 — “it certainly was no overnight thing” — but he now performs between 100 and 120 shows per year across the country. Some months are busier than others — October is drug-awareness month in many school systems, and pre-prom bookings are popular, while the summer largely slows down, except for some camp activity — but “Dirt” is most definitely a full-time job.

Taking to the Page

Still, as the show’s success grew, Morello wasn’t satisfied. He wanted to take it to a different place, and that place, it turned out, was the world of comics.

“I had always liked comics and graphic novels,” he said, starting as a child, when he appreciated both the heroism and humor of Marvel mainstays like the Hulk and Spider-Man — as well as their tortured, loner sides. “They were trying to save the world and save themselves at the same time. I can relate to that.”

For a long time now, he has wanted to write a book, feeling like he has more to say, “but I didn’t want my first book to be a memoir or tearjerker or something from Oprah’s Book of the Month Club. Maybe the day will come when I write more of a biography thing, but not now.”

Instead, he hit on the idea of converting his show into a graphic novel. He went out in search of an artist and found fellow Bay Stater Michael McMenemy, who took Morello’s words and ideas and turned them into a 128-page book — using pencil drawings and India inks, a decidedly old-school approach that appeals to Morello at a time when many comics are produced totally with Photoshop. The next hire was Joshua Jensen, a colorist from Texas who received the artwork online and colored it digitally.

He financed the early work and paid his collaborators out of his own pocket, then took to Kickstarter — a crowd-funding website where artists and others solicit support their projects — to raise $30,000 for the initial press run. That effort was successful, and Dirt: The Graphic Novel is being printed now, to be sold at school assemblies, at comic-book stores, and online at iamdirt.com.

“I don’t think I could have done this 10 years ago,” Morello said of both the creative process and the financing. “I would have had to get a publisher. I couldn’t have done things independently. The software was more expensive and out of reach. Now, it’s a whole new world.”

That independence is of particular importance. “There’s no publisher looking over my shoulder; no schools are telling me what to take out. As a graphic novel, it walks the same same tightrope I walk in my shows: is it edgy enough for young people, yet something schools could get behind? And that’s a hard tightrope to walk.”

He says his characters, both on stage and in the book, are not black-and-white moral clichés, but flawed, with the same shades of gray teens recognize in their own lives. And their response has been overwhelming.

“During your show, I realized that ’drugs’ can be more than just weed and crack; it can be anything,” said the girl with the handwritten note. “My dad’s drug is drinking alcohol — every night. My sister’s drug is physically abusing me — to let out her anger. My mom’s drug is verbally abusing me — so she can feel superior. My drug … is my eating disorder.”

And yet: “Thank you for reminding me that no matter how I’ve been treated and what I’ve been through, I am not DIRT.”

“That’s what keeps me going,” Morello said. “We all like to be told we’re doing something well, whether it’s an 8-year-old hitting a baseball or a 40-year-old trying to get a promotion at work. Of course, it feels good if it’s a teacher telling me that, or a parent. But when I hear from a student, that’s the e-mail or note I want. If I’m having a lousy day, that’s the one I read, and I understand that I’m on the right path; I’m where I’m supposed to be.”

Morello’s personal tragedy brought about an ironic change in the show. In the early years, the lead character died at the end. After Glenn’s death, Morello altered that fate. “It was too hard for me to go through that on stage, to have this character die and talk so much about it.”

But there was another, more philosophical reason for the change.

“So many assemblies boil down to, ’do drugs, and you’ll die,’ he told HCN. “But there are a lot of things poor choices can do besides killing us. And I don’t want to be just another assembly. I don’t think fear of death is a great motivator for anyone, especially young people. At 13, you don’t think you’re gonna die anyway.”

Rather, “what I chose to zero in on is our connection to each other, our relationships. When we know we matter to someone, and that someone matters to us, that’s what will motivate us.”

Paying The Piper Emphysema Is On The Rise In America, Even Though Smoking Is Not