Vincent McCorkle says too much emphasis has been placed recently on whether hospitals are merely turning a profit.
While that’s certainly an issue, especially since a large number have finished in the red in recent years, said McCorkle, president and CEO of the Sisters of Providence Health System and Mercy Medical Center, the larger question is whether hospitals have the means to make needed investments — in facilities, new programs and technology, and, most importantly, people.

For the most part, they don’t, he told The Healthcare News, and that’s why he and other hospital administrators say that these remain precarious times for facilities across the Commonwealth.

Indeed, while the recently passed state budget did provide much-needed relief in the form of higher Medicaid reimbursements, adjustments to the uncompensated care pool, and larger donations to distressed hospitals, the climate remains exceedingly challenging for hospitals.

They are still being reimbursed at rates far below the actual cost of delivering care, while they face mounting problems with attracting and retaining nurses and other specialists, and also must address new public safety concerns as well as the graying of the population and the added burdens this will place on the health care community.

And while hospitals themselves saw some measure of fiscal relief, other segments of area health care networks, particularly behavioral health, long-term, and home care units, did not, placing additional stress on other components of those systems.

So, while administrators are grateful for the help they have received, they stress that they need much more — not merely to reverse statistics showing that two-thirds of the state’s hospitals are losing money, but to make the kinds of investments they know they’ll need to make to survive in a changing health care environment.

As a new calendar year dawns, hospital administrators say they’re hoping the momentum gained in 2001 will carry over. Debate continues, however, as to just how much momentum was gained.

“I think the message was received,” he said, referring specifically to Medicaid underfunding, which was pegged at $200 million in a recent independent report. “There’s an understanding of what we’re up against now … I think all the ingredients are in place to deal with this situation,” he said. “But it all depends on the economy.”

Indeed, the economy will have a lot to say about what happens over the next year, said McCorkle, who noted that while legislators may now understand the plight of hospitals and other care providers, the softening of the economy and the events of Sept. 11 have certainly distracted them.

And with the best forecasts calling for economic improvement no earlier than the end of the second quarter of 2002, it remains to be seen whether the Legislature can build upon the steps it took this year, he said. “Every bit helps,” he said, “but we still have to look at things from the broader perspective, and the fact remains that, statewide, payment for services rendered is still among the lowest in the country.”

This phenomenon puts pressure on health care providers in myriad ways, he explained, eveything from keeping current with advancing technology to retaining anesthesiologists who can make more money in Connecticut or New York.

Daly concurred, adding that while there are many challenges facing hospitals, all or most of them come back to the central issue of funding. “It’s all interconnected,” he said of issues ranging from staffing to diversions to clogged emergency rooms. “There’s simply no margin for error.”

The $22.3 billion state budget included $45 million in hospital assessment relief to the uncompensated care pool, $15 million in Medicaid payments to hospitals, and an additional $15 million for “distressed” hospitals.

Porten said it was too early to say just how these measures would benefit individual hospitals. Specific clauses in Medicaid contracts, or de-escalators, can often turn a rate increase into a liability, he explained, adding that while all hospitals should be considered stressed, few will be eligible for funds in that pool, and Holyoke probably won’t be one of them.

Still, the steps taken by the Legislature should provide some breathing room, Daly said, and, coming as they did in a time of extreme budget duress for the state, show that state leaders finally recognize the gravity of the situation. “I think there’s a realization that the system is in trouble, and I believe the state is committed to doing something about that,” he said. “But the state also knows it can’t do it all in one fell swoop.”

Meanwhile, on the federal level, the events of Sept. 11 proved to distract Congress and divert attention from such issues as Balanced Budget Act relief, legislation to help recruit more nurses, and other measures, said McCorkle, adding that he expects Congress to refocus on those issues in the coming year.

While public and private reimbursement rates top the list of challenges facing hospitals, there are other concerns which, as Daly said, come back to money. Chief among them is recruiting and retaining quality help (see related story, page 16).

Indeed, hospitals are employing a number of strategies for both short- and long-term solutions to a growing problem that will be with health care providers some time.
Competition for good help has become extrely competitive given the market forces of supply and demand, said Porten, who called on state and federal governments to pass legislation to help encourage young people to get into careers in health care.

Such steps are necessary, he said, because individual hospitals, especially smaller community facilities, do not have the resources to wage this fight on their own.
Meanwhile, another challenge for hospitals is coping with some of the aftereffects of 9/11. The attacks have put even more pressure on already strained behavioral health services, and it adds another layer of responsibilities at a time when resources are already being stretched.

But hospitals accept this broader responsibility, said Daly, and are eager to provide education programs in bioterrorism and play a larger role in disaster preparedness.
That phrase brings Porten back to the larger challenges facing hospitals. “Disaster preparedness is important, but I face a disaster every day,” he said, referring to inadequate reimbursements from public and private payers and the daunting task of merely breaking even.

But for the year ahead, hospitals are focusing on much more than merely finishing in the black, McCorkle stressed. Their goal is to achieve some financial stability and make the kinds of investments they need to secure a solid future.

They got a start in 2001, but everyone agrees that it was just a start. 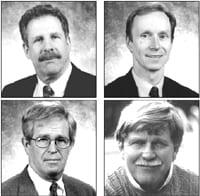