Adolescence is difficult in the best of times. It’s doubly stressful for kids today; they’re experiencing the same worries and insecurities as adults in this troubled economy, and with far fewer coping skills. From families struggling with joblessness and foreclosure to increasing competition for college admissions to the normal fears associated with impending adulthood, they’re particularly vulnerable.

“Teens who are overwhelmed by stress often are unable or unwilling to ask for help,” says psychologist Dr. Gregory L. Jantz, (www.drgregoryjantz.com), author of When Your Teenager Becomes … the Stranger in Your House. “But the longer they continue to flail and struggle emotionally, the greater the chance they’ll develop more serious problems like clinical depression, generalized anxiety disorder, dependence on alcohol or drugs and, sadly, suicidal tendencies. It’s up to parents and other adults to recognize when a teen is struggling and intervene.”

So how do you know when typical teen characteristics, such as moodiness, have moved beyond ’normal?’ Jantz offers these tips:

The most recent data available, which is about 3 years old, puts suicide as the third-leading cause of death for teens after unintentional injuries (such as car accidents) and homicide, according to the National Alliance on Mental Illness. More than 2 million teens attempt suicide each year.

“I suspect new data will put suicide as the second and possibly even the leading cause of death for that age group, because depression is the biggest risk factor,” Jantz says. “We’re seeing more teenagers suffering from depression in recent years because of the economy and overstimulation by technology.”

Visit www.aplaceofhope.com for an online survey to see if you or your teen is showing signs of depression (click ’Depression’ and then ’Depression Survey’ in the drop-down menu). –

Gregory Jantz has more than 25 years experience in mental-health counseling and is the founder of the Center for Counseling and Health Resources, near Seattle, Wash. The center provides comprehensive, coordinated care from a treatment team that addresses medical, physical, psychological, emotional, nutritional, fitness, and spiritual factors involved in recovery. He is the bestselling author of more than 20 books on topics from depression to eating disorders.

To Do Is to Be Local Woman Blogs for Good Health 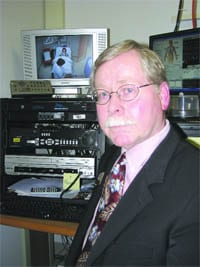 A Case of Supply and Demand $1.6 Million Grant Will Fund Efforts to Build Awareness of Careers in Health Care